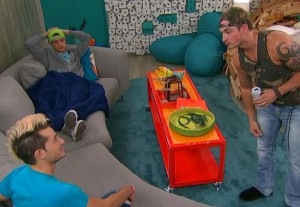 Can you believe there are only 2 episodes left? It has been quite the summer! Frankie is gone, and Derrick is HOH. I was a little shocked at how mean they were post Frankie eviction til everything came clear last night. 5 hours before eviction Derrick told Frankie that he was leaving that night. Frankie was pretty upset but thanked Derrick for being honest. Then there was a little Bombsquad meeting in the HOH where Frankie went all divalicious on everyone and told them that they created the most powerful player in the game by evicting him. They are reconnecting him with his millions of followers (Caleb’s delusions again have infected yet another house guest) and they are reconnecting him with the jury. Ok so one out of two ain’t bad right? Frankie you will have no connection with anyone outside the game til after the Finale so what are your millions of followers going to do? Frankie believes he will single-handedly determine the winner of BB16. I just about choked on some vomit. Everyone thinks Frankie has lost his mind which he has. It’s a desperate attempt to scare them into keeping him by a very desperate man. What Frankie doesn’t realize is if he just been that entertaining funny guy who could win competitions and left his “I am Ariana Grande’s brother” attitude at the door he would have been so much more likeable. Derrick is super pleased with himself for winning HOH. He is guaranteed a final 3 spot and the choice on who goes home solely lies in the Veto holders hands so he emerges from this HOH smelling like roses while the Veto holder will look like he just committed murder they are so covered in blood.

All Derrick has to do in these last days is making everyone feel safe and never leave any of them alone to talk. If these guys just had a conversation that they didn’t drag Derrick into they would realized he’s playing them all. His tactics are different with all three: 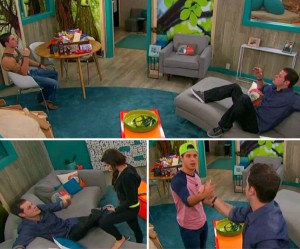 Victoria – She knows she’s going on the block, he has her convinced they are the closest in the house and they are just playing up this we hate each other charade

Cody – He gives Cody the choice. Block or no block. Of course Cody picks no block you’d have to be an idiot not to. But this tactic lets Cody know that Derrick has his back and is willing to do what Cody wants to do

Caleb – He has to manipulate him into volunteering. Really at this point it doesn’t even matter who’s nominated it’s more how they feel while sitting there. Even Caleb realizes that Veto is everything so sure I’ll volunteer to go on the block a 4th time. Hello, he’s building a resume!

There are no surprises that Derrick nominates Victoria, playing up their “fight” and Caleb, stating it’s just a formality. Mission completed. No feathers are ruffled and power rests solely on the Veto winners hand. I would love love love to see Victoria take Frankie’s advice and win something. Put Cody on the block and keep Caleb. Yes I said keep Caleb! At this point my fantasy final 2 is Caleb and Victoria for dramatic value. Yes people Derrick deserves the win, and he will get it. As boring as he is to watch, and he ruined this whole season, he has put himself in a perfect Final 2 position. But I can dream so let me have this one. Who would you want to win the Veto today? 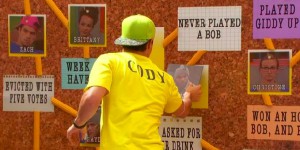 Thank you Big Brother for giving us the perfect Veto competition of the summer. Caleb’s Amber stalking has given us so much joy and a little trepidation and now we are playing a Stalker themed Veto. Nothing could be more perfect. This has got to be hands down the toughest mental competition Big Brother has to offer and Victoria and Caleb are playing. So it’s a battle between Cody and Derrick.  It’s the web puzzle where they are given clues to a house guest identity and they have to guess which person would connect the two clues and place their picture there. I would suck! This is a perfect competition for Derrick, or so he says. Sometimes I think he tows the I threw it line just so he doesn’t look bad, but if he DR’s are to be believed he didn’t want to win this because he didn’t want to have to choose who to send home. Victoria is useless at this competition, and Caleb isn’t much better. What is shocking me is that Cody is doing well. Derrick is “pretending” to be stumped as well handing Cody the Veto win. Derrick has no problems making Cody the bad guy in this duo.

The guys are playing poor trusting, loyal Caleb like a fiddle. They are telling him of course Victoria is going home, it’s us to the end, we’ll battle it out like gentlemen, no worries. Meanwhile this may be the first real blind side of the season. I actually kind of feel a bit bad for Caleb. He legitimately trusts these guys. Our eviction is played out

in front of the house guests. Cody actually reveals to both Caleb and Victoria the existence of the Hitmen and that it was created Day 2. Brilliant Cody. Best thing you ever could have done. You have thrown some shade over to Derrick, you have crushed Victoria’s dreams and maybe even made her actually mad at Derrick and let Caleb know who was REALLY in charge of the house before he goes to jury. He tells Caleb that in order for him and Derrick to get to final 2 he needs to leave. Caleb is evicted and off to chat with Chenbot! Cody has now just told Victoria (if she’s smart enough to catch it) that she has no chance to win. I wonder how Caleb’s reunion with Frankie is going to go?Maybe now he will see what Frankie tried to warn him about last week.Now my hope is that Cody realizes in the next few days that Derrick WILL walk away with the 500 000, wins the HOH and cuts Derrick too. That right there would win you the grand prize!  Do you think Cody has the nerve to cut Derrick and look out for his own game?

The first HOH played out last night so make sure you are watching the feeds now while you still have time. I am pretty sure they will be cut Sunday or Monday at the latest! We provide you with all the Flash back times on our spoiler page. Check out all our spoiler pages that can keep you up to date on everything going on in the house! Just click on any of  the links below and you will instantly be put in the loop.  AND REMEMBER IF YOU LOVE BIG BROTHER & HAVEN’T HEARD EVERYTHING WE ARE DOING THIS SEASON YOU MUST CLICK HERE BECAUSE YOU WONT BELIEVE IT!  YOU CAN ALSO CHECK OUT ALL OUR PRESEASON BB16 CONTENT HERE & 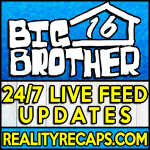 We also have a BRAND NEW TWITTER ACCOUNT which we will be using solely for our Live Feed updates.  It’s a great way for you to find out what is going down as it happens 24/7 on the live feeds!  We wanted to keep it separate from our MAIN TWITTER ACCOUNT which covers all our shows because we love you and don’t want to fill up your timelines!  Plus we will be posting news, gossip and spoilers there about BB16 exclusively too and we don’t like to spoil on our main twitter account.   Of course we can do all of this for you because of your generous support. While the feeds are down our updaters are providing you with flashbacks from the season to pass the time and don’t forget to check out our UTOPIA TWITTER ACCOUNT  where we’re are live tweeting that show as well!