It is the Final Four and I have to say that I am so sad that this season is coming to an end. I want less double evictions, no short weeks, bring back a jury member, do something so this season doesn’t end. Who’s with me?

We saw last week that Jon and Neda realized their paths to final three final hit a crossroads and it was a difficult realization to come to.  We know that with Jon being HOH he was really powerless on deciding who went home, so Neda stuck with her choice go with Sabrina 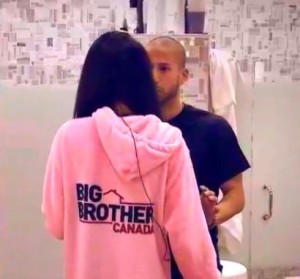 into the Final Four and send Adel packing.  Last night they showed us one of the few fights between Jon and Neda. Adel caught her first thing in the morning and asked her if he should pack his stuff. She told him yes. The plan was not to tell Adel anything and blind side him so Jon was furious with Neda. A sight we have not seen this season, their has been a rock solid alliance from the get go. Neda tells Jon she was caught off guard but in reality she wants him to be mad at everyone else and get his jury vote.  She had to convince Jon it was an accidental slip up because he now thinks that she is  playing him. He tells her that he’s been playing for both of them to get to the final 2. She says (to us) that he’s a fool if he thinks she is playing the game for him.

We left off at a cliff hanger on Thursday so we got to see the rest of the HOH competition play out. I knew, as did anyone who really follows the feeds, who won but I was on the edge of my seat the whole time. Sometimes they were tied, sometimes Sabrina was winning. Holy Cow!  I have never seen a quiz challenge so intense. Jon was probably wishing he was still in that diaper that whole competition. At the final question the three ladies were tied, and we went to chalk board. Like survivor and drawing rocks, you never want your fate decided on if you can guess how many coloured squares were flying around

in the Blown Away Challenge. Neda answered 1000, and then erased it and put her final answer as 800, Sabrina revealed her answer of 999 and Neda instantly regretted her decision, and Heather guessed 300. The final answer was 4460 and Sabrina won her first HOH. OMG did she ever scream. Rachel Reilly has nothing on that girl. My ears were ringing, I can just imagine that sound guy. I did feel bad that poor Sabrina really had no true friends left in the game to share her excitement. The three remaining Sloppy Seconds gave her hugs and as Sabrina is called into the Diary Room to burst some more 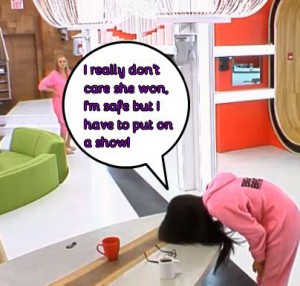 sound guys ear drums they then start to mourn. Neda is bashing her head on the table. I loved it, she is so funny and she isn’t even trying. I totally want to be best friends with Neda. Our sense of humor is totally the same, I get her sarcasm and I love it. She is throwing herself on the couch, but we know she is playing it up. While Heather is instantly regretting the decision to get rid of Adel, Neda knows that she has positioned herself so well in the end game that she would be final three no matter who won that HOH.

Sabrina gets her HOH room. I don’t normally discuss the HOH reveal because it’s always the same pictures, letters blah blah blah, BUT Sabrina’s was a bit different so we need to discuss. First the hilarity of Jon’s reaction 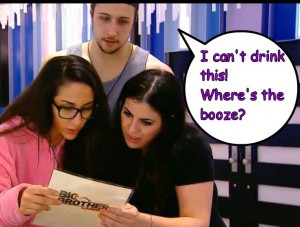 to her not getting ANY booze or candy or treats of any kind. Sabrina is on a food punishment still from the family visit.  Sabrina got her usual pictures, she got a pillow that said OMG and it is so TOTALLY Sabrina. She also got some gossip headlines. I didn’t get that but oh well. Now, one can view the fact that Heather is not allowed access to the HOH room as a punishment or in this case a reward. She sat downstairs on the couches as Sabrina squealed with delight at all her stuff and read her letter. After Jon and Neda took off out of there she called down to Heather. I thought it was pretty sweet of Sabrina to ask her to come up and she would show her through the door her pictures and she read her the letter. We all know I’m not a fan of Sabrina’s game play but as a person I really do think she is probably a totally sweetheart.

Everyone is sitting around minding their own business and the doorbell rings. Who is it? The one the only Glitter Gary himself. We all joked on 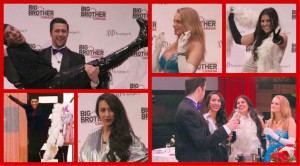 twitter they’d bring him back for the final 4 again, this is the week he won his way back in the house Season 1, and they did it. Not the way we thought, but they did. It’s that point of the Season, the BBCAN Awards. Its our Canadian way of paying homage to best and worst moments of the season. Gary beautifies the ladies and cleans up Jon pretty well. A tuxedo suits that boy, he was looking might fine.  After their glam session with Gary they get to have some fun and walk the red carpet and then it’s award time. The first category is Best Look and the nominees were Kenny: Humping and Fist Pumping, Rachelle: Forever Duck Face and Arlie: Running of the Nudes.  And the winner is: Arlie, “Running of the Nudes”  The second category was Best Dance and the nominees were  Anick and Adel:  Bathroom Boogie, Paul: Pappa PopNLock and Jon and Allison: Diary Room Disco. And the winner is: Jon and Allison,” Diary Room Disco”. The third category was Best Dramatic Cry. Shocking all three nominees were  Sabrina. We had “Diary Room Door Woes”. “Bedroom Blues” and “Puppet Tears” And the winner is Sabrina, “Diary Room Door Woes”  The last category was Best BFF Moment. The nominees were: Kenny and Sarah: Guess What! I’m Gay!, Kyle and Adel: Those Who Pray Together Stay Together and Jon and Neda: Digital Darlings. And the winner is Kenny and Sarah, “Guess What! I’m Gay”  All three nominees were deserving of the win and they all had the 4 of them emotional and Heather was in tears.  Big Brother gives them a montage of all the crazy moments in the house and they all look  back at the crazy time they have spent in the Big Brother house.

Enough of the sentiment, back to game. Sabrina brings Jon aside and gives him the news that he is going on the block. Not sure if she thought she was

going to be shocking Jon at this news but his reaction was basically DUH! No kidding.  We all know that Final 4 is one of the most important HOH’s of the season. It gets you to final 3 and you basically have no power.  Nominations mean nothing at this point because only the Veto holder really gets to decide anything. The Veto holder decides who  goes home and gets all the blood on their hands.

Sabrina goes back and forth on who she wants next to Jon. Neda has played a smart game and Heather has played a physical game. What they don’t show you on the show is nominations were basically a rock, paper, scissor game between Heather and Neda. They knew going in who was going up because in reality, it just didn’t matter.  Sabrina begins the nomination ceremony and for the last time this season pulls the one and only key card. Neda is safe. Jon is on for the block for the First time and Heather is on the block for the fourth time.

Who is going to win the POV? It’s going to be a crazy game from here on out and we have no feeds! What are we addicts going to do with ourselves? I can’t wait until Wednesday to see how the POV played out. It’s anyone’s game now, each of these 4 have valid reasons to take home the cash. Myself, I am torn between Neda and Jon. Jon has been my favorite since week one. Check out who Jon, Eric and I predicted to win this game here. Neda has proven to be the dark horse of the competition. I love her style of game play and I think she is hilarious. I don’t think I’ve seen a final 4 in a long time where I really was fine with who ever won. Even Sabrina! Don’t forget to watch closely on Thursday because you may see a certain someone (me) in the audience! That is right. I am going to be at the Finale and I am so excited!   So you know the drill by now. Comment below! I want to hear everything you have to say about last night’s episode