Adel and Sabrina are sitting on the same couch together and no one has died YET! I think by now we know that most of the fighting is just a game and we love to watch it. Adel knows that at this point in the game that there are no pawns. You go up on the block, you could go home. 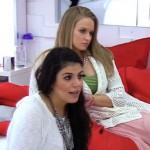 Sabrina wastes no time in campaigning to the Sloppy Seconds. Her point this week is that if she is sent home before Adel she can’t damage control the bashing he will do of all the house guests in the jury house. If she stays one more week she can go in and say listen I know what happened and debunk his lies.  Sabrina also plans on living in the Big Brother house forever because she doesn’t plan on leaving next week either. LOL Production do you hear that, you’ll have to drag that girl out kicking and screaming Finale night! Jon thinks that Sabrina’s argument makes sense but even more importantly he is more comfortable watching a competition with Sabrina in than he does watching one with Adel. Those thoughts may come back to bite him in the ass. Neda agrees that Sabrina should stay as well but like her plan with Heather she wants this to be Jon’s decision. Her jury management at this point has been quite remarkable.

After the Veto Ceremony the sacrifices the Final 5 made come into effect. Sabrina is on slop for a week. Adel is not allowed to sleep for 36 hours. Neda is told to pack up ALL her belongings. No clothes, no

jewellery, no hair products, NOTHING. Jon is locked into the HOH for 24 hours and Heather who got off the easiest can’t go into the HOH room. It doesn’t take long for Jon to get bored and start to lose his mind. Adel would sit at the door and sing, tell him what was going on and just try to make him laugh. He  builds a fort, hangs out in different areas of his room, and tries hard to make his own fun.  Neda uses her time away from Jon to secure new alliances and distance

herself from Jon. Poor Neda resorts to using an actual clothes iron to iron her hair and burns herself.  That onesie is probably gonna smell as good as Jon’s diaper by the end of the week. Everyone says good night to Jon and Adel has to find a way to keep

himself awake. He swims with the demon doll heads from the night of torture, he kicks them around a bit, cleans the house.  Adel campaigns to the girls in front of Sabrina. He argues that the jury will be bitter against him so he’s the better choice. He goes through person by person explaining why he wouldn’t get the votes. Sabrina wasn’t loving it, and the girls changed the subject.

Sabrina decided to talk to the girls separately.  She resorts back to the days where she told Allison not to be a stupid girl and tries to mafia style strong-arm Heather into giving her a decision. She threatens to not vote for her if she gets evicted her this week. Heather doesn’t cave to Sabrina and asks her to give her a day to think. She then goes to Neda with a very similar style of campaigning. Neda is on to her and thinks it’s painful to have to listen to her. She does know that Sabrina is a dangerous player because everyone thinks they can  beat her so she can slip  through the cracks and win the game. Neda isn’t listening to her and says if she keeps her it will have nothing to do with any of her campaigning. Adel works on Neda, thinking that if he can sway just Neda that big Jon would break the tie in his favor. He plays on their cultural similarities. Saying he knows what her family had to do to get here and that he thinks that she would use the money for better things than Jon would. Jon’s family is well off and he’s strong and tall and he has never struggled.

The saddest part of the night for me was Jon and Neda realizing that them playing the game together with the same targets has essentially come the end. Jon realizes that Adel would be better for

his game and Neda doesn’t trust Adel at all. Sabrina is her best route to final 3 and she would do her dirty work and get Jon out for her. Can the friendship survive? I think so. The fact that they realize that their goals are not common take the personal sting out of decisions that they will make. Neda, who is normally tough as nails, breaks down in the diary room and Jon takes to the hot tub to mourn the loss of his alliance.

Hello clothing optional jury house. Arlie and Allison are having a blast together. They are playing basketball, chilling out and talking about the house guests. Arlie thinks Jon made himself a huge target by voting him out and they both want to see him walk into the jury house next. Rachelle appears and everyone is sad to see her there. She tells them Adel won HOH and Allison is MAD. He had promised her he’d get rid of Jon or Neda so now Allison is even more bitter than she was before. They watch the tape and Arlie thinks Adel’s speech was funny. Allison things Jon is using Adel as a puppet. BJS is strong with Allison. Watch out at the Finale, she is gonna go nuts.

We go to the vote. Sabrina and Adel have kissed and made up this week. Adel says that the Sloppy Seconds have done a great job, dominated the last part of the game but do what’s best for your game and he holds no 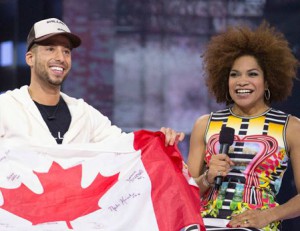 grudges. Sabrina says that she is true to her word and if they keep her she will follow her word to the end. In a unanimous vote Adel is evicted and leaves the house to a chorus of  “We love you T2T Wallah Bro”  He drops the bomb before he walks out that his power was totally fake and everyone fell for it. He waves his Canadian flag on the way out the door to meet Arisa. He tells her that he’ll love and respect them all til the end of the day. So I guess today being Friday all that love and respect is gone. Just kidding, I’m just poking fun, I know my friend Kyle is devastated that his boy has been evicted and he handled with the class.

The most important HOH is about to start. The winner of this is guaranteed a spot in the Finale. Final 3 is a huge deal. Jon is out of his diaper thank God, and not happy about being out of control of his destiny. It’s the classic before and after quiz. Arisa gives them one event and asks if it happened before or after a second event. Heather got the first question wrong and we leave the episode on a cliff hanger. Sabrina and Neda with 3 points and Heather with 2. Who will win this HOH challenge?

We are in our final week, and it has gone by so fast! The feeds go down on Sunday before the eviction for the final time. What are we addicts going to do with our time?  I guess we lean on each other in this difficult time.  Sunday at 9 we find out who are final three will be and I can’t wait. Who do you think it will be? Comment below and let me know. I always love hearing what everybody has to say.