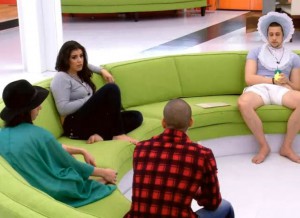 It’s Heather vs Sabrina on the chopping block this week and Heather is MAD! So angry she didn’t even stick around for post nomination hugs. The poor girl has been through the ringer in this game and had finally felt like she was part of an alliance. Jon brought her down to lows she was feeling during week 3/4 when she was being shunned. She feels betrayed, hurt, lonely and confused. She doesn’t get how her friend and ally could put her on the block and not even give her a heads up. Neda wants to bring Sabrina and Adel to final 3. She knows she can beat them and she also knows that neither of them would take each other to the final 2. Jon for the first time in this game is behaving like an ass. He’s totally insensitive to Heather’s emotions  and quite frankly

not managing his jury very well. Leave it to Neda to do damage control. She agrees that Jon should have warned her and is using that to her advantage. She does lie to Heather and tell her that she is sticking to the game plan but Heather didn’t fall off the turnip truck yesterday, she knows something is not right. After her conversation with Heather, Neda runs to Jon and tells him how upset she is and  stresses how important it is that they win veto. Then it occurs to Neda it would be better to let Sabrina win it, put up Adel, and then Heather would be less bitter. Going home over Sabrina would be a total betrayal, but choosing from within the Sloppy Seconds is an easier pill to swallow. Heather finally goes to Jon since he obviously isn’t going to come to her for a talk. He tells her it wasn’t a big game move and the plan is the same. The reason he didn’t tell her was he was in the DR trying to figure it out up to the last minute. We all know this is a bunch of BS but Heather takes him at his word. She gets he reason but her trust is not as strong. 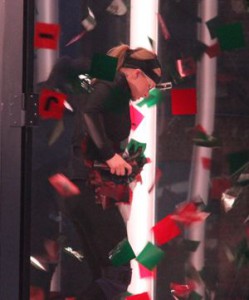 We go into this weeks POV challenge “Blown Away.”  One by one they go into a wind machine where they have letters flying all around them. They need to gather the letters and spell out the phrase GRAB THE POWER OF VETO. There are also Twistos bags hanging from the ceiling with dollar amounts. You can grab the dollar amounts as well, but this is a time challenge so the person who gets the phrase the fastest will win.  Jon goes first, he is obviously safe so he doesn’t care about veto he goes for the cash first, then he spells the phrase. Neda also goes for the money first. Remember they want Sabrina to win this so she’ll take herself down. She spells her phrase and then forgets to hit the buzzer for a good 20 seconds.  Adel goes for this veto, he knows that if someone goes down his bum will be in the chair. He just grabs whatever flying letters he can and sorts them out after. Sabrina gets in there and thinks she has a hard decision to make. Money or veto? Are you kidding me you are on the block for what the 4th week in a row. You’d think you’d be clawing your way towards the veto. Nope, Sabs grabs money first and then spells her phrase out. Heather channels all her emotions into this veto. It’s do or die for her and she just grabs letters and stuffs them into her bag. She 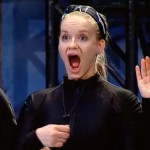 spells her phrase quickly and now it’s time to find out who wins. First Jon reveals a twist to this veto. Only the person who got the most money the fast will actually keep any of it.  Neda made herself a cool $3000 dollars. The person with the fastest time was……..HEATHER I have never been so happy to see someone win a veto. This kid is a challenge beast I can’t help but root for her. I knew she’d pull it out, hopefully she wins HOH.

Jon is not happy about this win. Sabrina is scared because now the original plan is out the window and Adel knows unless he can make a really convincing argument he is going up on the block. Jon and Neda are a little angry that Sabrina wouldn’t go solely for veto and Jon is Hundo %  regretting going for the cash since he didn’t get any money. Neda is playing it up that she is more upset than she really is.  Their first major division in strategy arises this week when they realize that Adel is better for Jon’s game but Sabrina is better for Neda’s game. Will they be able to work through this? I’m not sure and considering Neda has the voting power this week, it’s not looking promising for Jon.

Sometimes I think Big Brother likes to torture us and last night was definitely an exercise in emotional waterboarding. The final 5 were called one by one into the living room and via TV screen were asked 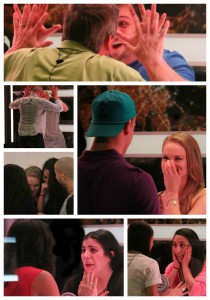 what they would give up for 2 minutes with a loved one.  The answer by all of them was anything. Sabrina was the first one called and she was asked if she’d give up food for a week to see her sister Stephanie. Of course she would, without hesitation she says yes and is led into the war room for 2 minutes with her sister.  Heather is asked if she would give up access to the HOH room to see Will, her boyfriend. This is huge at this point in the game to shut yourself off from strategy talk but of course she does it. She was so happy to see him. They are totally adorable together. Adel gives up sleep for 36 hours to get 2 minutes with his best buddy Mohammed. To see her sister Roya, Neda had to give up access to all her personal belongings. She was the only one that actually gave a thought to saying yes. Now I understand why on twitter it was a big deal that Neda was allowed to change her underwear! The most emotional for me was seeing Jon take solitary confinement for 2 minutes with his father.  This father/son duo had me in tears and listening to Jon say how much he loved his father was gut wrenching.

We are leading up to the POV ceremony and  Adel is working  Jon like crazy. He’s trying to convince him that Neda has the game on lock but Adel promises to take him to final 2. He would terrorize the whole house to guarantee Jon the win all he wants is 20G’s. Sabrina is doing the same thing. She is trying to convince the girls she is better for their game then Adel. Neda is zoning out and Heather wonders why Sabrina would think she would ever trust her over Adel. Heather begins the nomination ceremony and no surprise here she uses the veto on herself. Jon’s second HOH has now been a wash and he nominates Adel.  Allison screw 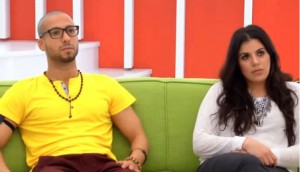 ed his first HOH with her special veto and now Heather has done the same thing. The two arch nemesis of Big Brother Canada Season 2 are on the block together.
Tune in tonight at 9 to find out who had the better campaign.

Do you think Jon did the right thing by keeping Heather in the dark? Should he have put up Neda beside Sabrina? Comment below and let me know what you think!