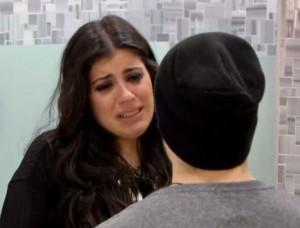 This has been a crazy week in the Big Brother Canada house. After a couple of crazy missions from Big Brother and Marsha the Moose, Allison removed herself from the block and Rachelle replaced her with Ika.  Sabrina is controlling her minion like a champ this week. So much so that Rachelle thinks she is proving to the boys she can be trusted. Poor Rachelle, you will be cut the minute they don’t need you anymore. Sabrina is trying to play Jon into thinking that she is really upset Ika is nominated. She is crying in the washroom about how she loves Ika. Jon knows it’s a bunch of BS but is letting Sabrina think that he believes her. Heather walks in on the tears and immediately knows there fake and runs out to tell Adel about Sabrina being a cry baby. They both know to steer clear of game talk with her. Everyone knows that Sabrina is the snitch of the house. She runs from conversation to conversation bringing the information back to Andrew and Kenny.  Sarah and Kenny are talking and Sarah is hiding behind the washing machine so Sabrina doesn’t see. Sabrina gets pretty emotionally charged seeing the relationship that Sarah and Kenny have. It’s a pretty tell-tale sign about how crazy a girl is when two alliance members can’t talk without her going bat shit crazy.While at the moment Sabrina is a valuable mole to the First 5,  they both think Sabrina is going to turn out to be more of a liability. Kenny says if Sabrina wasn’t in the alliance, he would vote her out.  Ika’s nomination has sent her and Adel into damage control mode. How can Ika save herself?  She knows the girls are a wash. There is nothing more she can do there. Her thought is to go to Kenny. Convince the boys she is useful to them and maybe she has a shot. She tells Kenny that she is more help than Heather can ever be, that she would go after players that Kenny can’t because of his alliance. Kenny realized that Ika is a smart girl and her points are valid. Is it enough to keep her in the house?

There is never a dull moment in the Big Brother Canada house. This week has been buzzing with surprise after surprise. The house guests are called into the backyard where balls are falling from the sky. Each ball has a message. After reading hundreds of messages, all with the word count in them, they realized that they should probably count the balls. Big Brother then calls them each into the Diary Room and they have to guess how many balls dropped. Ika is the winner of this challenge. I’m not sure winner would be the word I’d use but it’s all I got. Big Brother Topazed the crap out of poor Ika.  They brought her out into the backyard alone, where she was shown two tables. One had letters at home for all the house guests, except herself. The other had a check for $5000. She had to pick between giving everyone a taste of home or herself some money. The rest of the house was inside watching and hearing every word Ika said. She started out talking nicely and everyone was laughing. This seemed to be some sort of therapy session for Ika because she then just started to bash them all.  Only Jon, Neda and Adel were spared. She was putting games on blast for all to see, including her own.  She really called out the alliance of her, Jon, Neda and Adel. She put fear into the First 5 alliance. Ultimately she decided to take the money.  I feel it was a smart move. These people were

never going to change their vote. Why leave with nothing when you know you are going home.  Ika then has to shred the letters. Does Ika do this quietly and calmly. No! Ika doesn’t do anything quietly or calmly. As each letter goes into the shredder she lets out how she really feels. Jon, Neda and Adel get “I am so sorry” as their letters enter the shredder. The house door opens and Ika is faced with her house guests. They are not happy. Rachelle gives her the double finger salute with a chorus of F-YOU IKA’s,  Andrew calls her a dumb bitch and Sarah is sobbing. Adel goes up to her and quietly says “They did Topaz to you” Ika doesn’t seem to mind though. She knows these people were going to vote her no matter what she said. Sarah is trying to be the voice of reason. Even though she is hurt her letter was shredded she says Ika made the right decision to take the money.

Its time to vote. We all know what is going to happen. We’ve known it all week. Ika is voted out by a vote of 9-1. Adel stands his ground again, and votes with his heart. He really doesn’t care if people don’t like that he votes to keeps people and I don’t think anyone really tries to sway his vote. Adel knows his mind and is loyal to his friends. My one disappointment was Jon. I look forward to his witty one liners as he casts his vote. He must not have been able to rhyme anything with Ika, because all we got was I vote to evict Ika. As I am 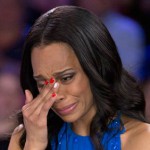 typing this listening to the feeds Jon is actually talking about he couldn’t  think of a rhyme. That is too funny! Ika’s exit interview was pushed back to the Side Show because they still had a twist to reveal to Canada.  She was shown her good-bye messages. Adel’s made her cry and Gary jumped out of his seat to comfort her. Peter  told her that he had such high hopes for her going in but Topaz was more productive asleep than she was awake. Ika gave him her “look” of displeasure, but kept calm. 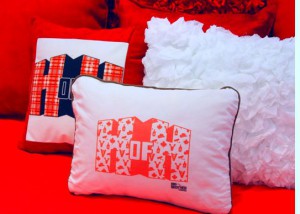 Now for the second twist of the season. A twist that has never been done on a Big Brother anywhere. Canada we are the HOH. We get to decide who is nominate and who goes up for POV. Here is how it works. Canada votes, (yes Americans you can vote too),  the two with the highest go up for eviction. If the POV is used the third highest is the replacement unless they have won veto then it’s the fourth. Voting has never been so important. We have all been screaming about making a big move. Well Canada now is your chance to do what we’ve been screaming at our TV’s and computers about.  If the power isn’t switched this week, we have no one to 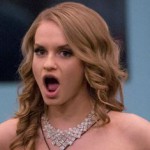 blame but ourselves and we can sit in silence as Sabrina mind controls this whole house on behalf of Andrew and Kenny! You can vote every day so let’s do this!  Now Big Brother has been playing a trick on the house guests. They played a sound track of construction so that they think some elaborate challenge is being built. Imagine the surprise and confusion as the doors are opened and the backyard is empty. Arisa tells them that Canada is HOH this week and will get to decided who is on the block. Sabrina is screaming I told you so, everyone else is in a state of shock.

The best part of this twist is we don’t have to listen to game talk until nominations are made. I can’t wait for Sunday to see who we have  decided to nominate. Who do you want to up on the block. Comment below and let me know your thoughts. Don’t forget to vote! See ya Sunday!