Johnny is trying to decide who to nominate out of the 6 people cast into hell. He decides to go with what he calls the “sad puppy” strategy, trying to make himself seem like he’ll be easy to manipulate. He cries to the girls cast into hell, saying that he feels evil for having to nominate people with only 6 options. When he tries the same strategy with Will, he can’t do it because he can’t understand what Will is saying. LOL. We need Will subtitles, and apparently so do the houseguests! 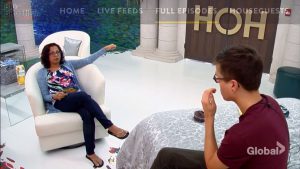 Johnny decides that he wants to put Rozina up because she was cheering so loudly for Paras. Ali tells him that Rozina wanted a girl to win and nominate Johnny and Will. Ali is hoping that telling Johnny keeps her off the block. He tells Rozina that he plans to put her on the block. She tries to talk him out of it, saying that the other girls weren’t cheering for him (they were smart enough to cheer for both Paras and Johnny), and she talks about their personal connection. 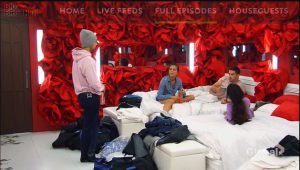 Derek, Kaela, Paras and Jesse form The Real Deal alliance and say that they can easily control the whole house between the four of them. The girls are grateful to have heavenly allies even though they’re currently in hell. Plus, Kaela says that Derek is hot. Yes, he is, but not Ryan Gossling hot. They’re a showmance already. Eye roll. 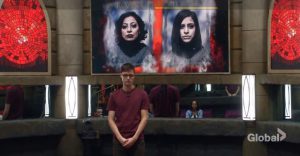 At the nomination ceremony, Johnny nominates Rozina for cheering so loudly against him in the HOH competition. He nominates Ali because she was the first to fall. He says that with such a small pool of candidates and having only been in the house for a few days, there really weren’t good reasons to nominate anyone else yet.

Rozina is upset after nominations, and Hamza tells her not to scramble yet. They still have veto. He explains in DR that voting Rozina out is dumb because she is the oldest houseguest, is a number in his corner and she doesn’t do well in competitions. He says it doesn’t make strategical sense.

At the Inch by Inch POV competition, Kaela hosts dressed as a butterfly, while the players Johnny, Ari, Rozina, Jesse, Hamza and Olivia are dressed as inch worms. They must get 5 eggs into holes at the end of their lanes. Once they land a gold egg in the hole, everyone else must stop for 30 seconds while the person that sinks the golden egg continues playing. At one point, Ali is in the lead, but Hamza and Johnny aren’t far behind. Johnny sinks his golden egg, while everyone else’s ends up rolling off the platform. Johnny manages to pull ahead and win the POV, which leaves him looking like a comp beast, and it’s only Week 1. Careful, Johnny, don’t blow your load too quickly. At the POV Meeting, Johnny stays the course and doesn’t use the POV.

Hamza talks to Derek about Ali’s great performance in the competition; he says that Rozina is cooking and cleaning, is the oldest person in the game and that she sucks in the competitions. Derek agrees with Hamza and says that they should get rid of Ali.

When it’s time for the eviction, both women say that they want to stay in the game, but Rozina gives an impassioned plea, pointing out that she isn’t a threat, isn’t good in comps and will be a number in their favor. Unfortunately, no one bites at her offer, and she is evicted unanimously. Geez, someone could’ve thrown her a sympathy vote. 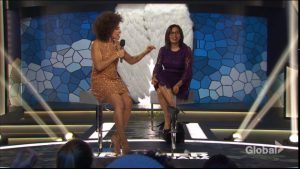 When she speaks with Arisa, Arisa tells Rozina that she was trending in Canada, which gives her a thrill. She thanks Canada. She says that those ‘young kids’ are afraid to make big moves, which is what she would do. While Rozina is sitting there, Arisa tells them that we’ll find out after the break which 2 gate crashes Canada Cast. 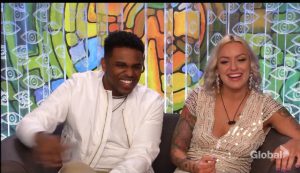 Arisa brings out Veronica, Merron, D-bag Mikey and Kirsten. I thought Kirsten had it in the bag, but I was wrong. Veronica is the girl going into the house. Merron is the guy voted in, as I predicted. They are told that they are not allowed to tell the rest of the cast that Canada voted them into the game and that they have 1 week of safety. They go in through the diary room, where they’re told to come up with a cover story as to why they are entering the house. They decide on a draft from the website and they were pulled up on stage. Cheesy; none of the super fans in the game will believe that. It’s going to be interesting to see if their story works. (It doesn’t.)

Before you go, please comment below. What do you think of the season so far? Did Canada Cast the best new houseguests with Merron and Veronica?

Enjoy Eric’s nightly comedic shows on YouNow with BBCAN6 tea served piping hot. Former Big Brother houseguests will join him during the season. Make sure to FAN him on YouNow. Follow him on Twitter @RealityRecaps. You can follow me @rebeccakayj.

There is going to be SO MUCH to keep up with this season!  So make sure you follow us on TWITTER and check our BBCAN page daily for updates!  Make sure to join the Trash Draft where you can win prizes for selecting the 5 houseguests who will have the trashiest behavior this season.