The HOH comp after the Triple Eviction was questions about the speeches made throughout the season. Kevin had those memorized, so guess who won? Of course, Kevin did. He made it clear that Demetres messed up his game by nominating him during the triple. 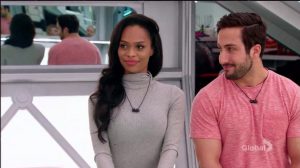 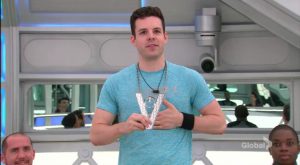 For the POV, all the houseguests play since there are only 5 of them left. From the houseguest descriptions, it sounded like the comp involved pulling rescue dummies out of water, then digging in sand to find letters and using the letters to solve a puzzle. Apparently, Demetres was extremely close to winning as he missed only 1 letter. Kevin won the POV. Afterwards, Dillon came to him and they made a final 2, except that Dillon told him that he would have to come after him next week so he has a chance to win since all of Kevin’s friends are in jury. Kevin expressed that he thinks he would win against any of the final 5 if he makes it until final 2. How arrogant can you be, Kevin Martin?

Kevin came up with the plan of using the POV on Ika so that she wouldn’t sacrifice her game for Demetres. He planned on backdooring Dillon, which he believes will cause a tie vote and he will get to say that he got out Demetres. Karen further encouraged him to do so with subtle manipulation, telling him that Demetres and Ika played a better game than him and that dragging weaker players to the end (her and Dillon) would look weak in the jury’s eyes. She also told him that she and Dillon would vote to evict Ika. That was all he needed to hear to push him to follow through with his plan. 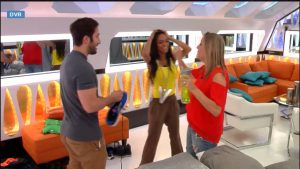 What Kevin doesn’t know is that Karen, Ika and Demetres have been working together since Week 1, except for when Demetres put Karen on the block when the Secret POV was played by William. They did this to ensure that Bruno would go home and to keep the truce they made with Jackie. They regret having bought what Jackie was selling, and Demetres has apologized repeatedly for nominating Karen. Kevin won a movie screening with the POV and invited Karen and Dillon to join him. After the movie, the POV ceremony was held. During their speeches, Ika and Demetres let Kevin have it. Demetres said he didn’t want him to use the POV on him, and Ika told Kevin to stick the Veto up his ass where the stick has been all season. Then, Kevin used the POV to save Ika and backdoored Dillon. 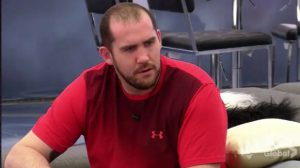 Dillon is pissed, so much so that he tells Karen to vote him out so that Kevin doesn’t get the satisfaction of breaking the tie on Thursday night. Karen has been planning all along to keep Demetres and now she has the perfect excuse since Dillon told her to vote him out. He and Karen didn’t start hanging around until day 34 when Emily left. It’s day 58, so she has a longer and better relationship with Demetres and Ika. Kevin has been trying to drop subtle hints to get Karen to vote out Demetres and has encouraged Dillon to do the same thing, but Karen isn’t going to give him the satisfaction breaking the tie. 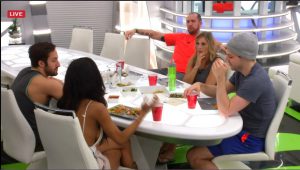 The feeds have been on and off on Monday, with Sarah Hanlon coming in to roast the houseguests Zingbot style, and BB production coming over the PA to tell them to do things in slow motion or freeze. Sarah told them various things about their games, with her telling Kevin that she respects his game. He is very encouraged by this because Kevin is all about ego. Dillon, Karen, Ika and Demetres came up with the term #Karanoia during the #DreExposedParty, and Sarah lets them know that it’s caught on with BBCAN5 fans. Karen is hysterical with her paranoid behavior, but Sarah said she is freakishly correct in most of her predictions. Dillon’s mother also made a surprise visit, while the houseguests were required to be frozen. This task may play into the upcoming HOH comp, so Ika and Demetres plan to study everything that is said throughout the day. They are also studying days with Karen in hopes of beating Kevin should days be part of the Final 4 Veto, which has been the case in some past seasons. They win a Chinese takeout meal for completing the task. 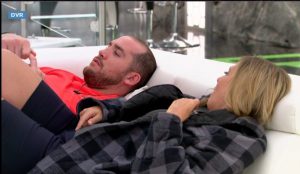 Karen told Dillon Monday night that she is going to vote him out. She explained that on Day 1, Ika and Karen formed the Broadgade with Cassandra, Sindy and Neda, but only Ika and Karen were loyal to it. She said that Demetres has protected her throughout the game, so she is voting him out on Thursday. He understands and thinks Kevin is a piece of shit because he admitted to making a fake Final 2 with him so he wouldn’t try his hardest for the POV. He also told him that he checked his morality at the door and will do anything to win the game.