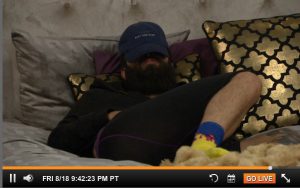 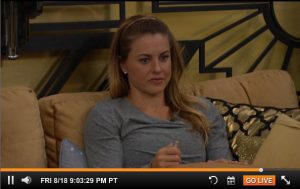 The three of them are working to position themselves between Jason/Alex and Raven/Matt. Right now, they are hoping that the order of evictions is Mark, Jason, Matt and Kevin with Paul and Josh pulling in Alex after Jason goes and Paul pulling in Raven after Matt goes. Alex is constantly saying how shady Kevin is so they feel that her connection to Kevin will be broken when Jason leaves and Raven will be co-dependent enough to need a partner in Paul. They also don’t want to be seen as a threesome, so they are trying not to meet together very often. 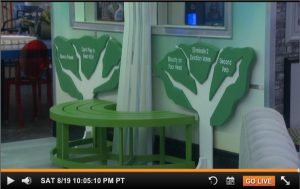 On Friday, the houseguests learned of a new twist called the Tree of Temptation. They can pick apples from a tree that correspond with a new Prize or Curse. There are 5 options: Save a Friend, Second Veto, Bounty on Your Head, Eliminate 2 Eviction Votes and Can’t Play in Next HOH. Mark ended up with this week’s temptation, which was Save a Friend. He selected Paul, so he is safe this week from nominations, which doesn’t really matter since Christmas is HOH and wouldn’t put him up anyway. Only 1 apple can be picked per week. 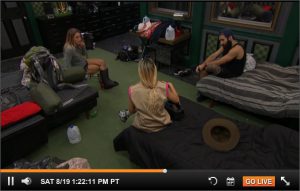 Alex points out to Paul and Christmas that Kevin knows Derrick in real life and she thinks he’s an undercover cop. They think he is continuing to act sketchy by pushing for Matt to leave instead of Mark, which is against Christmas’ agenda. Kevin won’t leave Jason’s side, and it’s bugging the shit out of Alex because she can’t get a moment alone to talk to Jason. She wants Kevin out sooner rather than later, and Christmas and Paul agree.

Zingbot made his annual appearance. From what I picked up on feeds, he mentioned Trump and Russia, zinged Matt for just banging Raven all season long and Alex for carrying Jason. Christmas had a song that was to the tune of ‘On The First Day of Christmas’ that mentions 10 broken bones. Kevin’s zing was about using oil to preserve his youth, but it’s too late. I’m not sure what Paul zings are. Zingbot went after Josh about his weight and people on Twitter are PISSED! Betcha that zing is edited out of Wednesday’s episode. 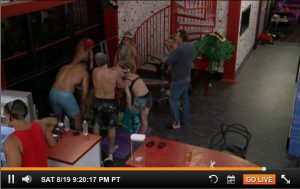 The POV was Saturday. The POV players were: Christmas, Matt, Jason, Raven, Paul and Mark. Christmas wasn’t medically cleared to compete. The only 1 that couldn’t win was Mark so that they could follow through with the backdoor Mark plan. Jason pulled out the win. It ended up being the Crisco challenge where they fill up a giant bowl with oil, which is usually an HOH competition that we get to watch on live feeds. Jason doesn’t know that us feedsters like to see the veto on the winners neck, so he didn’t wear it. However, Paul congratulated him while Jason was in the shower. 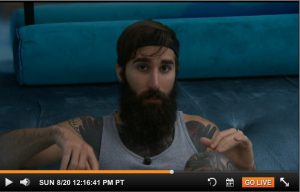 Paul gave a friendship chat Sunday explaining his strategy in aligning himself with each of the 3 power couples as their #3 (Christmas + Josh, Jason + Alex and Raven + Matt). He is setting himself up for end game scenarios. He is considering the top 5 of Christmas, Josh, Raven, Kevin and himself, but also considers putting Alex in that mix if Kevin is sent out. Alex is the only one that he worries about not beating, He doesn’t want to end up with 2 pairs and himself in top 5 like last year, although he was part of a pair with Victor. He’s trying to decide if he brings Christmas or Raven and Josh to final 3. He says that he is doing his best to leave nice goodbye messages to the jury for proper jury management, which he didn’t do last year. He explains that he is playing a much more strategic game this year. He is hoping not to go on the block in the next 2-weeks so that he can say that he hasn’t been on the block all season. He thinks if he makes it through the next 2 weeks, he has a legitimate shot at winning. He has controlled everyone’s HOH by suggesting targets. He even controlled Jessica and Cody’s, because he did the opposite of what they wanted and flipped the house against them. He is constantly putting targets in front of himself. He is already thinking about his finale speech.  It’s crazy to him that he hasn’t been on the block for 65 days by this coming Thursday. He is hoping to win his way to the top 3 by winning the HOH when there are 4 houseguests left.

Tomorrow is the veto ceremony, and Jason will use the veto on himself and Mark will be backdoored, unless Kevin loses his shit between now and then, but even then, Mark is the better competitor and should be headed out the door on Thursday.