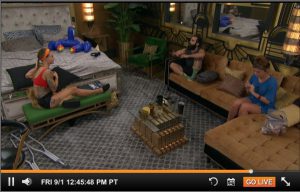 Thursday night’s HOH competition was Ready, Set, Whoa, and Paul convinced everyone to throw it to Christmas. He supposedly even threatened Kevin that if he didn’t throw it, Paul would win it and put him on the block. So, the player with the broken leg won the HOH comp that involves running.

No one took an apple from the Tree of Temptation. The tree has been a big epic fail. I think we all liked it better when we got to vote for America’s Care Package, although who knows if production just picked the winner of each one. We know they change the rules when it suits them, especially during OTT. Still have OTT PTSD. 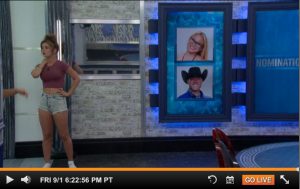 For nominations, Alex offered to go up as a pawn. Alex has been working on overdrive to make Kevin this week’s target. Christmas decided to put up Alex and Jason. Jason had no idea he was going up, so he was completely discombobulated after the nominations. Christmas said in her speech that she wants to get out a strong male competitor. Alex told Jason that they are just pawns, that Kevin is the backdoor plan and target so he has nothing to worry about. Actually, Jason is Christmas’s target. 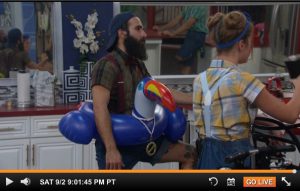 For the POV, everyone except Josh played. Bobby Moynihan and his wife hosted. Apparently, they are huge Big Brother fans. Bobby’s new sit-com “Me, Myself and I” premieres on CBS the week after BB ends. Bobby brought in pans to bang at Josh and was apparently very funny. The competition sounds like a new one. It involved a series of recognizing a pattern of Slap, Kick, Punch and pressing buttons to coincide with the series of actions performed by what I’m picturing as something like when Cody had to kick himself in the ass repeatedly during BB16. They were literally slapped, punched and kicked by some apparatus. Then, they had to press the corresponding buttons. It went on for 15 or 16 rounds including 8 tie breakers. Kevin and Raven both threw it, and I don’t think that Christmas could play. Paul won the POV. 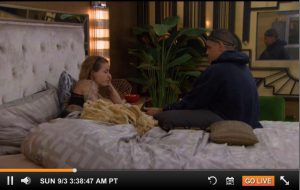 Christmas, Paul and Josh (although begrudgingly on his part) have come up with a plan to get them through the next 4 evictions. Paul is going to use the POV on Alex and tie her in through their AMF connection. Kevin will be the replacement nominee. They are going to do a split vote between themselves and Raven, and Christmas will break the tie, sending Jason home. She has been working to tie Alex in, too. Paul is going to act like he didn’t know it was going to happen and blow up after Jason is sent out. Josh is going to tell Jason straight up before the eviction that he is voting him out.

They are all under the impression that Alex already kind of knows that Jason is the target, and she may not mind Jason going out of the game. They think that she realizes that she can’t beat Jason in Final 2. They’ve been bickering ever since he didn’t backdoor Kevin. We saw on Thursday’s episode that she didn’t approve of not taking Raven off the block like he promised. He handled his HOH poorly, didn’t take Alex’s advice and Paul, Josh and Christmas all think booting Jason is the right thing to do. 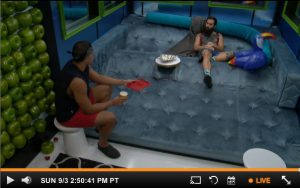 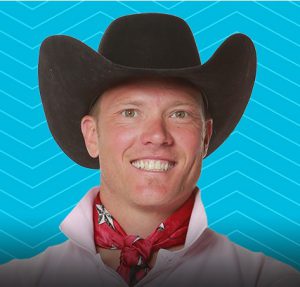 According to Paul, Kevin has already mentioned not using the POV and getting out 1 of Jalex, although I didn’t see it on feeds. They are selling it that Kevin is going home. Kevin is going to freak out when he goes on the block next to Jason, and they are going to feed each other’s paranoia this week, but Jason will be the one going to jury this week. The houseguests realize that another double is coming and suspect that it may be on Thursday. The next houseguest to be sent packing will either be Alex, Raven or Kevin depending upon who wins the double HOH. Paul thinks he can get Alex to throw it, but after Jason leaves, she may not be keen on doing so. If 2 of Christmas, Paul and Josh aren’t on the block, they are clearing a path to the finals.