Hurricane Irma delayed this blog. Thanks for your patience! 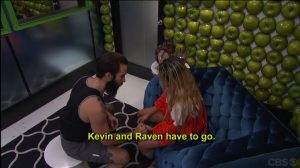 We get to see all the behind the scenes drama that wasn’t included in the double eviction episode. We see Paul and Josh plan their fake fight prior to the double eviction. Josh feels he must go along with Paul’s plan but he doesn’t like it. During the staged fight, Paul says that if he had been on the block, Josh would’ve voted him out. Josh says, “Yeah” while sobbing. Paul grabs Alex, pretending that he was also blindsided and goes into the APSR, saying “what do we do?” He leads her to believe that targeting Raven and Kevin is best and that Christmas and Josh can come after them. Paul, Josh and Christmas had planned on taking out Raven if Alex were to win HOH. 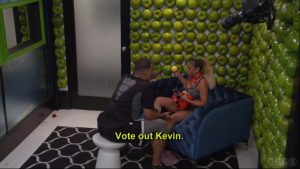 After Josh won the POV, he tells Paul to leave the APSR so he can talk to Alex. He asks her what he wants him to do and tells her that it’s her and him now. She tells him to leave noms the same and vote out Kevin. In the storage room, Josh tells Paul and Christmas in front of Alex that he wants to take out Kevin. Afterwards Christmas hugs him and says, “Raven or Kevin? We need to be unanimous.” Josh says that he wants it to be a split vote and he’s voting out Kevin. 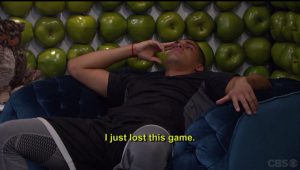 After Raven is evicted, we see the full extent of Josh’s sobbing and histrionics. What a fucking baby. Paul tells him that this is Big Brother, not Big Baby. If this fucker wins BB19, I’m going to lose my shit—you’ll see my histrionics on full display. Everyone tells him to quit crying. He goes into the APSR and bawls his eyes out. As Raven exited, she told him that he said he had her back and he didn’t. She thinks Paul voted to keep her, not Josh. Plus, Josh went against the plans of his team. He says to himself that he just lost the game. I fucking hope so. He is the most emotional player I’ve seen, possibly ever. 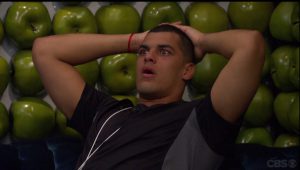 Alex was blindsided by both evictions, and her nemesis Kevin is still in the game. Josh and Alex are in the APSR. Paul comes in explaining that Raven was a better competitor than Kevin. Paul is also in tears in front of Alex. When she leaves the he goes from crying to smiling, telling Josh that there’s no way for any of the 3 of them to be voted out this week. Josh is completely shocked that Paul could turn his emotions on and off like that. He says in DR that it was like looking at the devil. Damn—Paul is getting the villain edit!! 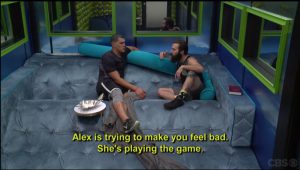 Paul goes to Kevin and asks him to throw the HOH. He says that Christmas will take it. Josh is supposed to take it as they planned last week. He says at first that he can’t take the shot at Alex, but he changes his mind after Paul explains that Alex is playing with his emotions. In DR, he says that he is going to do what he wants and take a shot, but they won’t know which way he’s aiming. He sees what an awesome game that Paul has played. On feeds, he compared him to Dan Gheesling, Derrick and Vanessa. 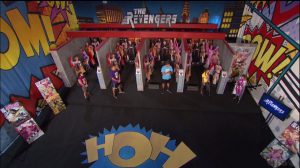 For The Revengers HOH competition, Alex is dressed as a super hero and welcomes everyone to BB Comics week. They watch The Revengers movie trailer and then go to the back yard to answer 7 questions about the trailer. Kevin says he doesn’t know if he wants to throw the competition; he wants a letter and pictures of his family. Kevin gets the first 3 right. Paul realizes after he gets the first 1 right that he is now playing in the competition. It’s a neck and neck competition, but in the end, Josh wins the HOH just as planned. 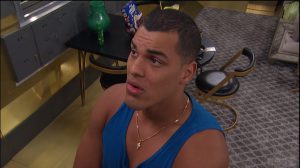 Paul checks in with Josh after the HOH. He says, “You know what to do? No questions asked.” Josh speaks to live feeders trying to figure out if he can take a shot at Paul. He says that the only way he can win the game is to take a shot at him because Josh can’t beat Paul, even with him being a vet. On feeds, Josh figured out that he wouldn’t have the votes to take out Paul even if he nominated him or backdoored him, so he must follow through with the plans that were previously mapped out by Paul, Josh and Christmas. 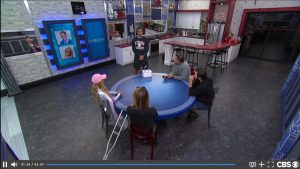 At the nomination ceremony, Josh nominates Kevin and Alex. He says to Kevin that he has floated his way to the end of the game and he would’ve liked to see him play more. He tells Alex that she is a competition beast and these are the nominations that he must make. In DR, Alex is pissed because she could’ve taken a shot at Josh for voting out Jason. Kevin jokes in DR that he never gives up, never stops or he wouldn’t have 7 kids.

Who will make it to Final 4?