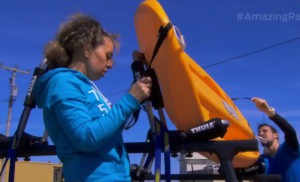 We were in for one crazy leg this week as teams all leave Halifax for the Magdalene Islands in Quebec. The Double U-turn and the brand new Face Off this leg and I can’t wait to see how this plays out. All the teams are on the same flight once the touch down they need to find the marked trucks. Before they can read their clue they need to pack their trucks up with camping gear exactly as the pictures provided and given the thumbs up by the judge before they can head out. Gino and Jesse knock it out an are first to leave, followed by Cynthia and Brian. Sean and Brent seem to have a bit of hard time but all teams make it out relatively easily. Nic and Sabrina are way behind the back leaving last. Teams now are all driving to Plage de la Dune du Sud.

The Magdalene Islands are famous for their beaches and host the largest sand castle competition. For the Road Block teams need to decide Who’s the Kin of the Castle. One team member needs to exactly recreate the demo sandcastle around their partner who is laying in water and buried in sand to their neck. Gino buries Jesse and uses his construction background to make the perfect sandcastle on his first try. Cynthia 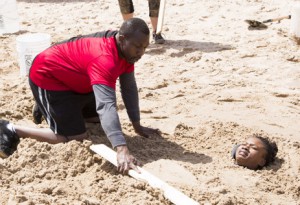 buries Brian and almost crushes his “boys” in the process. Neil  and Ope are burying their daughters. Matt, Dujean, and Brent are all building for their teams. Where are Nic and Sabrina. Cynthia gets denied her first try. Nic and Sabrina finally show up and Sabrina almost breaks Nic’s arm. After 45 minutes Kristin is visibly struggling with the cold and Neil gets denied his first check and they discuss taking the penalty. Sean is struggling as well. Cynthia finally finds her mistake and her and Brian are off. Ope makes a strong third finish. Nick and Matt, Brent and Sean and Dujean and Leilani all finish quickly after each other leaving Neil and Sabrina still building. Kristin is struggling more and more by the minute. Finally Neil finishes and as he pulls Kristin from her sand tomb she screams in pain. Her muscles have cramped up from the cold and inactivity and to be safe she is taken to the hospital.  Nic and Sabrina are still plugging away while everyone is at the detour but she finally finishes her castle.

Once done with sand castles they make their way to Monument aux Pecheurs for their next clue. Gino and Jesse being the first to arrive find the clue to the first Face Off. Before moving on with the race they must beat another team in a sport made in the Magdalen Islands, Kayak Hockey! The first team to two points

moves on. The brothers need to wait for Brian and Cynthia to arrive, but when they do the brother make quick work of them and Brian and Cynthia wait for Simi and Ope. Brian and Cynthia defeat Simi and Ope (who’s afraid of the water) and they wait for the cluster of teams to arrive to the challenge. The leg from hell as Sean says continues for Simi and Ope as Matt and Nick, Brent and Sean and Leilani and Dujean all defeat the father daughter duo. Having spend more time in the water than on the kayak Ope is struggling with the cold and decide to take the 4 HOUR penalty and move on to the roadblock. Cleared to continue racing but still in obvious pain and on crutches Kristin and Neil get to the FaceOff, but with Kristin unable to use her legs, the duo opt for the penalty as well. With no one left to dual Nic and Sabrina face no one, and don’t have to wait the allotted time the losers would have had to wait and can continue on race. 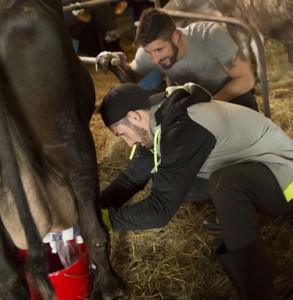 The Ref hand them their Detour Clue. Ride it or Pull it. In Ride it they need to make their way to the stables and complete an equestrian dressage course in less than 8 minutes. In Pull It teams need to locate the barn push a 75lb hay bale from the field to the barn than each team member needs to milk a cow and each get a litre of milk each.  Gino and Jesse choose Pull it as do Brain and Cynthia. The brother overtake the married couple pushing the hay and are able to maintain their lead. Sean and Brent, 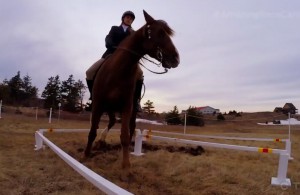 Nick and Matt are all milking their cows together. While Dujean and Leilani head over to Ride it. Leilani has a horse background and tames her feisty horse. Dujean masters the course as well. An injured Kristin decided to go look at the horse challenge. She’s super upset because she could do it so easily and once she’s there realizes that it’s all in the reigns and is excited to think she can actually do this challenge. Simi and Ope are alone milking their cows and Nic and Sabrina show up.

Gino and Jesse are the first to head to L’escalier de la Pointe aux Meules. The sight of the Double U-Turn but they have to climb 185 steps to get to it.  Brian and Cynthia find it first and choose to not use it. Gino 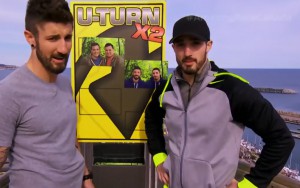 and Jesse get strategic and try to flush out the Express Pass from Brent and Sean. Matt and Nick choose not to use it. Sean and Brent U-turn Nic and Sabrina so they can save their express pass. They pass Leilani and Dujean on their way in and Leilani tells them they can do it. Confidence restored the boys get on their horses and save their express passes and do it with 17 seconds to spare. Simi and Ope, Kristin and Neil and Nic and Sabrina all see each other at the Doubl;e U-turn where Nic and Sabrina find out they are Uturned. Luckily for them when they get to the riding challenge they are told it’s too dark and dangerous for the horses so they just have to wait out an allotted amount of time and continue on.

Brain and Cynthia are first to take off for the Old Harry Beach but get lost along the way opening up first place for Gino and Jesse. win a year of free gas and 2 tickets to any Canadian destination Air Canada 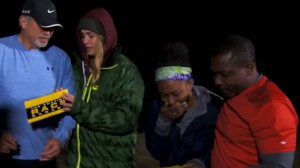 flies. Brian and Cynthia arrive second. For the fourth time Nick and Matt check in third. Dujean and Leilani drop from 1 to 4 and Brent and Sean are fifth with their express pass still in tact. Neil and Kristin beat Simi and Ope because they read a road sign but both have to wait out their 4 hour penalties. In the mean time Nic and Sabrina check in 6th. The father/daughter teams share the mat and Simi and Ope think they are done for but Jon has good news, this leg isn’t over, keep on racing! He hands them their next clue and no one can believe their luck.

They are now on their way to Sudbury, Ontario. Will Kristin’s legs heal up enough for her to compete effectively on the journey? I have to give the girl credit, the amount of pain she was in would force anyone to withdraw and she went to each challenge in hopes she could figure out how to do it! I LOVED the Face Off challenge. It’s an exciting new element to the race that can completely change it up like we saw for Sabrina and Nic. What did you guys think of this leg? With there be a chill in the air between the Uturned and their punishers? Comment below and let me know.