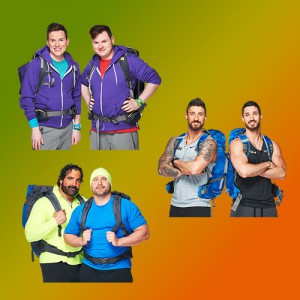 Here we are everyone! The final leg of Amazing Race Canada 3. I’m excited, nervous and sad all at the same time. Can’t wait to have a winner but I don’t want the show to be over. It’s been so much fun watching them all summer long!  So to recap our final three teams are Brent and Sean, the underdog brother team who have beaten the odds, escaped elimination and won 2 legs of the race. Then we have Gino and Jesse or Captains Canada. With 4 wins under their belt, they either have a great leg or a bad one but there is no challenge these boys can’t pull off. Lastly Nick and Matt, wrestling partners that have been steady top 3 in 9 of 11 legs. Who will take the prize as they all jet off from Edmonton to Vancouver for this last leg of the race?

Once they land in Vancouver they need to locate Terry Fox Plaza to receive their next clue. The teams are relying on cabs again this leg so lets hope the listening skills of the cabbies in Vancouver are better than in Edmonton and they wait when asked. Gino and Jesse arrive first. It’s the first roadblock of the leg Who 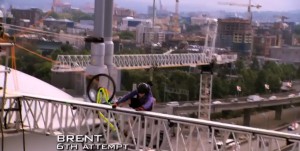 Wants to Roll with It.  Not me! No thank you. No way I’m riding a bike way up in the air across a narrow plank. Not enough harnesses, safety straps and catch nets in the world. Nevermind the plank is painted to throw your eye off so you fall. The wrestlers aren’t far behind and Gino is feeling the pressure. He is afraid of heights. If you fall you have to wait in line for your turn so it’s crucial he pulls this off in one go as Brent has also arrived to do the challenge. Gino pulls it off first go. The trick is not to look at the plank so the optical illusion on it doesn’t freak you out. Matt is up on the plank and Nick is thinking he should have done it. He’s better at biking and Matt is the bigger of the two. Matt looks like a bear on a bike (Nicks words not mine) from the ground but gets the job done in one try as well. Now for Brent who is terrified. He immediately falls off over and over again. Sean is on the ground feeling helpless and just wants to be able to support his little brother. These guys make me cry EVERY episode! Finally Sean goes up to his brother and with his encouragement and on his 20th try Brent makes it across and now has a lot of time to make up. Watch the boys hearfelt moments at the roadblock here. Can they do it?

After completing their roadblock they are now making the long drive to Whistler where they need to find the Squamish Lil’wat Cultural Center. It’s time to see how well you studied in between legs of the race. Here everyone is given a white board and a giant world map. They need to remember the cities they visited in each of the 12 legs and with a string and a scale in miles they need to measure the distance between each city 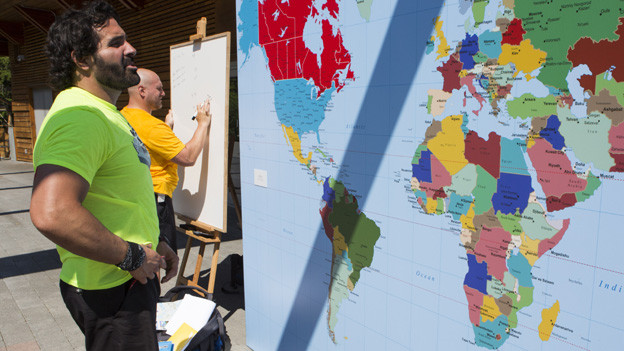 then convert the total miles into kilometers to get the total distance travelled. They need to come within 5% of the 48500 km they travelled this season to get their next clue. Gino and Jesse arrive first and start to methodically figure it out. They start out strong but once Nick and Matt arrive they start to feel the pressure. Nick is a geography teacher and Matt is good with numbers so they are feeling pretty confident in themselves. The boys start to bicker and Nick and Matt pull ahead. They come up with 48541 which is amazing. They were only 41 km off! Smartly they erase their board before taking off of no one can steal the answers. Not to long after Nick and Matt leave Gino and Jesse get their clue with the answer 48179. They only erase, and not very well, their last answers so when Brent and Sean show up they can still see a bit of it. They guess it with 48979, the guess is within the 5% so off the go. Thanks Gino and Jesse for helping them make up A TON of time! 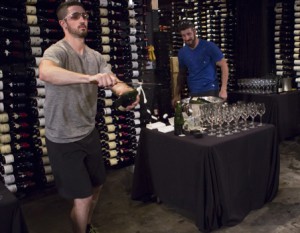 Everyone is off to the Bearfoot Bistro to learn the art of wine sabering from a guiness book of world record holder. Here they learn to saber a bottle of Champagne. Each of them need to cleaning saber 2 bottles one with a sabre and one with a wine glass. I think once you learn to do this you will never uncork a bottle again! It’s the coolest thing ever. All the teams seem to breeze through it with no issues. The only issue was Gino and Jesse again had cab trouble giving Nick and Matt some breathing room. Nick and Matt leave the challenge first but Gino and Jesse are right on their tail and catch them trying to steal their cab but manage to stop them. It’s time for the second roadblock –  Who’s ready to meet ones match. Here Jesse, Nick and Sean are given one ski and must find the identical match on a rack of thousands. It must match markings, height and binding size. Jesse’s first try is wrong and realizes is the binding size and get his match on the second try. Nick tries several times before realizing the binding size. Sean is methodical and calm and finds his ski quickly. Once they find the ski the have to head over to Whister Blackcomb Mountain launch themselves off a ski jump and into the water. Literally my worst nightmare, skiing, heights and water! Jesse is first to complete his jump, followed by Nick and lastly Sean completes the roadblock. 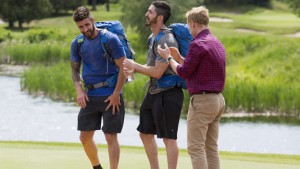 All teams are now making their way TO THE FINAL PIT STOP on the 12th hole of Nicklaus North golf course. My hometown boys Gino and Jesse are the first to run up to the mat. Racing this race for their single mother the boys on top of all their leg prizes have now won 250000, 2 Chevy trucks, free travel for a year and a life time of free gas! Congratulations Gino and Jesse. You ran a truly amazing race and deserve this win. Nick and Matt place second with Brent and Sean hitting the mat third. Of course Sean must start this race as he began it…..puking. Jon just wants him to do it over the side. Please don’t ruin his shoes or the mat LOL. All three teams raced well and I would have been over the moon at any of them winning this race. They all had me in tears at the mat.

The highlight of this race for me was definitely watching Sean and Brent. Their support of each other was always unwavering, they took on each challenge even though you would think oh they won’t be able to do it and did it and their overall attitude to everyone they came across on the race was just an amazing representation of our country. All three teams gave Canadians something to be proud of so congratulations to all of you for making it that far. What was the highlight of the race of you? Comment below and tell me what you thought of the season and the winners. To relive the highlights of season 3 check out the video with the highs and lows!

Until Season 4 begins we can look forward to Amazing Race 27 that premiers tonight! Hanne is back covering the US season for us so don’t forget to check out her recaps and Eric is doing You Now shows before every episode so you won’t want to miss out on any of that fun either!