We are in the final stretch of Amazing Race Canada now! Final five and it’s been a wild ride. I have truly love watching these teams this season and it’s been hard for me to pick a favorite. We saw Brian and Cynthia leave the race and now all teams are leaving for Delhi, India on the same flight. One more international leg before our teams head home to finish the race off. Once our teams land in Delhi they need to make their way to the Ghazipur Fish Market to find their first clue. Simi and Ope have made leaps and bounds since their near elimination in Quebec and get to the market first. Sean and Brent have a hard time finding a taxi but once they do take a minute to appreciate all they have as Canadians when they see a woman washing her dishes in the street. These boys are so endearing. They are positive, funny, charming and kind and I love them to death. Their clue tells them to Use Their Head.  Each need to carry 20 catfish in a basket on their head to a fish vendor to get 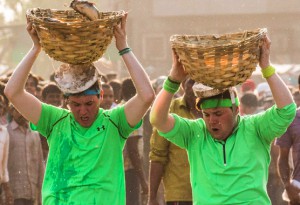 their next clue. The catfish are alive and they do not want to be caught or moved. Simi and Ope quickly devise a strategy of gathering them in the basket and using another to keep them from jumping out. Matt and Nick aren’t too far behind the father/daughter team and end up finishing the task first. We’ve got fish jumping out of baskets, teams chasing fish down the street is by far the funniest were Sean and Brent. Coming from Atlantic Canada you would think the brothers would be cool with fish but not Sean. He is freaking out all over the place  and I don’t blame him. It’s stinky and slimy and just plain gross. Even the locals are laughing at him, but he does manage to make it through. The brothers leave the market last. To watch more of Sean VS Catfish click here!

After turning in their fish everyone needs to find Faily Bartha Village for their next clue. Here they find 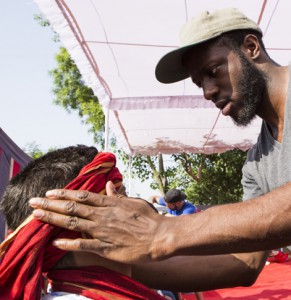 their Roadblock Who Wants a Head Start. We all know that Indian men are known for their turbans. In this challenge one team member must learn how to wrap turbans in three different styles. Once the judge has decided they did it right they will move on. Matt takes on this challenge and finishes first, keeping the wrestlers on track for their first victory. Ope takes on this roadblock and Simi instantly wishes she had since it’s similar to doing the head wraps the women do in Nigeria. Ope struggles and doesn’t read his clue and does three of the same style making way for Gino. Gino’s attention to detail gets him out on his second try. Ope finally finds his groove and they leave in third, after the judge plays a little mind game with him. Turban judge is tough and likes to mess with you! Leaving Dujean and Sean to duke it out in the battle of the turban. Dujean gets the lead and the brothers leave the roadblock in last place.

After completing the Roadblock everyone is on the way to M-Block Market in Greater Kilash. Teams 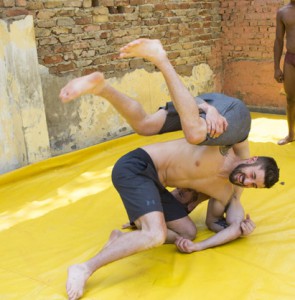 are reliant on Tuk Tuks which are these little tiny vehicles on three wheels. The traffic is terrifying to everyone and Matt and Nick barely fit in their Tuk Tuk but they along with Brent and Sean manage to have some fun in them. Check out the fun in the Tuk Tuk here. Once at the market they find their next clue. It was a tight race between The wrestlers and Gino and Jesse so it called for a little covert clue reading. They grab their clue hide it and walk off so the boy have no idea they have it. Matt and Nick are delighted at their choices of Spice It and Slam It. In Spice It they must find the oldest spice market in India and grind up 100g of hot chilis. Once the vendor is happy with their grind and the amount they will get their next clue. In Slam It teams will learn 7 traditional wrestling moves  and perform them in sequence. When the judge is satisfied they will get their next clue. A wrestling challenge for the wrestlers. No brainer off to wrestling they go. The moves look similar to moves you would see in the ring here so I did ask them if they were similar and here was their answer.

Gino and Jesse also choose wrestling as did Leilani and Dujean. I was shocked to see the exes take on that challenge but Leilani again proves to be a beast. She uses this challenge as therapy to deal with her ex and enjoys every minute of taking him down. Simi and Ope opt for Slam It as well but Ope’s back opts out and they switch 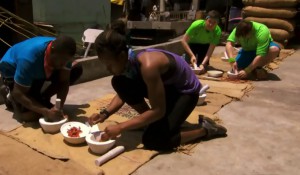 to Spice It. Brent and Sean are grinding spices as well. Nick and Matt have no issue with the wrestling and knock it out quick with Gino and Jesse not far behind them. Simi and Ope have their grind turned down for being too big and Ope was blowing on it and got some in his mouth and needed to stop for water allowing Sean and Brent to over take them. After some issues with move number 3 Leilani and Dujean are given the OK to move on. As the Detour ends it seems Simi and Ope have fallen from first to last place. 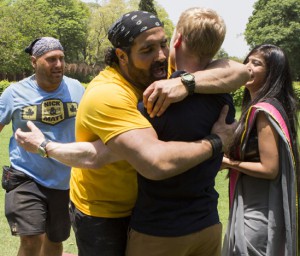 After completing the detour everyone needs to find Jon at Humayuns Tomb for the pit stop for this leg of the race. It’s a Tuk Tuk and foot face for the Gino and Jesse and Nick and Matt. Finally Nick and Matt come in first place for the first time this race. The boys win themselves a trip to Amsterdam and a year of free gas! After so many third and second place finishes it was nice to see these guys finally come out on top. Gino and Jesse come in second place. Out of nowhere Simi and Ope land themselves in third place. Not having fun in the Tuk Tuk anymore and stuck in traffic Sean and Brent seem out of the race. Dujean and Leilani arrive fourth and the brother look defeated as they step on the mat.  My heart 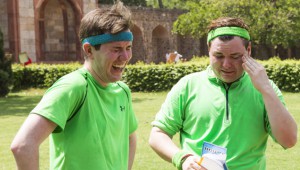 is literally breaking for these guys and I am very aware of the fact that Jon asks them how they feel but has yet to say you have been eliminated. I know what this means and my heart is racing. YES it’s a non elimination leg of the race! My boys Sean and Brent are safe. These guys have been such a great representation of Canadians that the good karma they received today is well deserved. They have a speed bump to take on next leg in Penticton, BC and a Double U-turn is in play next leg as well.

Do you think the teams will get cut throat next week? It’s down to the wire. I have a feeling it will get a little dirty when the Double U-turn shows up! Who are you rooting for? I love all the remaining teams so much I’d be happy for any of them to take the prize. Comment below and let me know who you want to win Amazing Race Canada.