This leg of The Amazing Race started with Tanner recounting the ACL injury he got during the sprint to the pit stop on the last leg. Understandably, Tanner & Josh are worried about how this will affect their game on the race, because they can’t just rely on being the athletic team anymore. At 5:45 am, Justin & Diana leave the pit start to travel by bus to San Antonio de Areco. Once they arrive, teams will choose a pickup truck and catch a ride to their next clue. After getting a bus driver to take them to a local bus terminal, Justin brags about how knowledgable he is of the race, therefore no other team can beat them. Of course, this could just be production trying to amplify the drama between the green team and Tanner & Josh. Tanner & Josh and Kelsey & Joey are on the first bus. On the second bus are Chris & Logan, Denise & James, Cindy & Rick, Tiffany & Krista and Jazmine & Danielle. Justin & Diana have just reached the bus terminal, and are trying to get tickets. Meanwhile, Josh & Tanner tell Joey & Kelsey that they’re planning to give the Express Pass to the team that U-turns Justin & Diana. I think this is a pretty smart plan, because Justin & Diana are big competition. 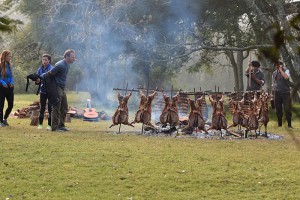 Shortly after this, the bus makes a stop and – prepare to be shocked – Diana and Justin get on! Once the first bus arrives in San Antonio de Areco, the three leading teams jump in the back of trucks and are driven to the roadblock. In Gaucho Grill, racers must properly hang meat on racks to be cooked based on the examples provided (the bones have to be facing out, it has to be right side up, and it must be skewered properly). The meat looks like it weighs a lot, and some of the racers are having trouble skewering it properly. Meanwhile, the teams on the second bus are wondering where Ernest & Jin are; the dancers are stuck at the bus station for a while before they finally board a bus. Joey is the first to think he is done with the roadblock, but one of his carcasses is facing the wrong way. The teams on the second bus arrive while the 3 leading racers are struggling with the roadblock. Josh finishes the roadblock and receives the next clue which tells the team to pick up a rack of lamb and proceed to Plaza Principal. Rick seems to be doing pretty well at this roadblock, which he attributes to his surgeon background.

Joey completes the roadblock while Justin seems to be having a breakdown, because he can’t figure out 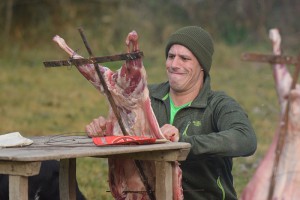 what he is doing wrong. Rick finishes the roadblock on his first try, and Justin finally finishes after he starts all over. Tanner & Josh make it to the detour, which is centered around horses. Horse requires teams to choose a polo mallet, get into uniform, and properly equip a polo horse (the horse is fake). In Carriage, teams must select a buggy whip and detail a carriage, then drag it down the street to a specific tree and have it harnessed to a team of horses. Both detours end with teams bringing the horse/carriage to a gaucho festival in order to receive the next clue. Tanner & Josh and Kelsey & Joey choose Horse, while Cindy & Rick decide to do Carriage. Unfortunately, Cindy & Rick didn’t read the entire clue, so they head to the detour without the buggy whip. During the roadblock, James can’t figure out that the biggest slab of meat is facing the wrong way. Denise realizes this and yells to James that he should look at the big piece, “There’s got to be some trouble with the big slab.” This is true, and James fixes it. Denise then realizes that they might get a penalty because she game James advice. Logan says that you just have to know when to keep your mouth shut during roadblocks. 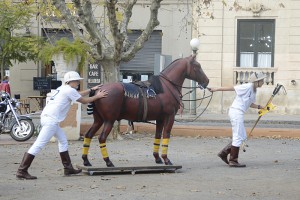 James finishes the roadblock (thanks to Denise’s help), then Danielle completes the challenge. Chris is really struggling, he keeps running back and forth between the display and his area. Chris finally gets it right, leaving Tiffany at the roadblock by herself. Tanner & Josh are disappointed when Kelsey & Joey catch up to them, and befuddled as to why the inspector doesn’t approve their horse. Tiffany finally completes the roadblock, and Cindy & Rick get to the detour when they read the clue again and realize that they forgot the buggy whip and need to turn around. The brothers finally reach the roadblock, and Ernest tries to complete the roadblock quickly to make up time. Tanner & Josh finally realize and fix their mistake (which was tiny), and set off to the gaucho festival pushing their horse. Other teams are arriving at Horse, putting Joey & Kelsey and Justin & Diana on edge. Tanner & Josh finish the detour and receive their next clue, which directs them to the pit stop at Museo Gauchesco.

Denise is bossing James around at the detour – surprise, surprise. Justin & Diana finish dressing their horse 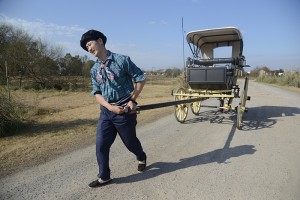 and set off to get their next clue. Ernest finishes the roadblock on his first try, while Joey & Kelsey are now pushing their horse to the gaucho festival. It’s now a foot race to the pit stop between Josh & Tanner and Diana & Justin, although the guys start in the lead. Denise and James argue about which direction they need to push the horse in. At this point, I’m hoping they will get a penalty and be eliminated this leg. Tanner & Josh reach the pit stop in first place and win a trip for 2 to Cambodia. Justin & Diana are in second place, and Phil tells the four racers that there will be a double U-turn in the next leg. The guys pretty much admit they want to use the U-turn, but Justin doesn’t seem worried. Kelsey & Joey come in 3rd place. Carriage definitely seems like the harder challenge, but Krista & Tiffany are forced to choose it because there are no more mallets. They arrive at the detour as Cindy & Rick start pushing/pulling the carriage to the gaucho festival. Jazmine & Danielle get 5th place, and Denise & James arrive at the mat in 5th place. However, because Denise cheated at the roadblock by giving James a clue, they have a 30 minute penalty. I think it should be longer, because teams have gotten longer penalties for doing things that didn’t impact the challenges (like giving taxi drivers your belongings in place of cash to pay for the fare). 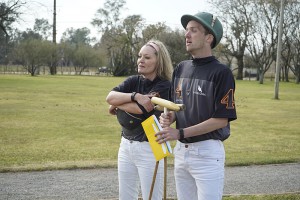 Tiffany & Krista arrive at the tree where they need to hook horses up to their carriage, only to realize that they forgot the whip at the start of the detour. The cheerleaders decide to run back to get the whip, while Denise is telling James not to be mad as they wait out the penalty she caused. Logan & Chris arrive at the mat before team mother/son’s penalty is up, making them 5th. Denise & James get 6th place; Cindy & Rick are trying to find a way to the pit stop, because they can see it but a pond separates them. Finally, Cindy & Rick find the mat and get 7th place. Ernest & Jin finish the detour, but Tiffany & Krista still get to the pit stop before the brothers, in 8th place. Ernest & Jin come in last place and are eliminated from the race. What did you think about this leg of The Amazing Race? What penalty do you think Denise deserved (if any) for breaking the rules at the roadblock? Let me know who your favorite team is in the comments below!