The fourth episode of The Amazing Race Season 27 began with footage of Tanner & Josh working out their Double U-turn/Express Pass plan. Josh & Tanner plan to get to the detour and use their Express Pass to skip it, then U-turn Justin & Diana. Then the next team that arrives at the double U-turn will choose to U-turn Tanner & Josh, wasting the second U-turn so Justin can’t use it to stay in the game. Tanner & Josh will then give the team that U-turns them the Express Pass.This is a smart strategy, probably copied from season 21 when the chippendales U-turned Abby & Ryan, then Trey & Lexie U-turned the chippendales. At this point, it seems like Justin & Diana will only stay in the race if they make it to the U-turn second, or if this is a non-elimination leg. 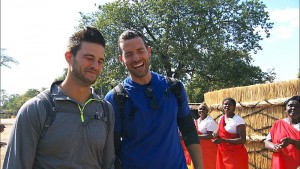 When the leg actually begins, Josh & Tanner learn that they will be flying to Zambia, Africa, home of Victoria Falls. The clue says that the racers only have two flights to choose from, and there are only seats for 4 teams on the first flight. On flight #1 are: Josh & Tanner, Joey & Kelsey, Jazmine & Danielle, and Justin & Diana. Chris & Logan seemed to get a little lost, resulting in them being on the second flight. However, the flights are only 15 minutes apart, so teams from the second flight could easily catch up. While waiting at the bus station (to Buenos Aires, then they’ll fly to Africa), teams agree to the double U-turn plan. Once in Africa, teams are off to Mukuni Village, where they will receive a traditional Mukuni welcome. Teams were unaware that this welcome involved a woman spitting water on them, but everyone except Denise laughed it off. Kelsey & Joey are the first to get their next clue, which tells them to go to Batoka Aerodrome in search of their next clue. The four leading teams have all received the Mukuni welcome when the second plane lands. Joey & Kelsey reach the roadblock, Rise Above, which requires one team member to ride an open-aired cockpit (basically a motorized engine with wings) above Victoria Falls. While in the air, they must spot a clue hidden in the mist.

Tanner & Josh decide to use their Express Pass on the roadblock, which is interesting because it looks 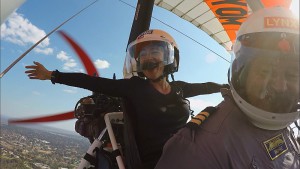 like a pretty easy challenge. The detours are much longer and more difficult than the roadblocks, so it would’ve made more sense for Josh & Tanner to save their Express Pass. They are now headed to the town of Victoria Falls in Zimbabwe, where they need to go to Shoestrings Backpackers to get their next clue. While Kelsey is performing the roadblock, Joey feigns ignorance as Justin brags that Tanner & Josh shouldn’t use the U-turn this early, since it won’t work. Justin asks Joey to form in alliance, and he agrees, although it seems like his true allegiance is to Tanner & Josh. This is a smart move, because saying no would have created a powerful enemy. Kelsey finds the TAR flag pretty easily, on a bypass bridge at Victoria Falls. Joey & Kelsey find the clue box at the same time as Justin & Diana, while Danielle & Tiffany’s taxi got a little lost. They accidentally cross the border before going to the bridge, so they have to retrace their steps and go back to Zambia.

When Tanner & Josh arrive in Zimbabwe, they learn that they have to take a keychain with a time on it 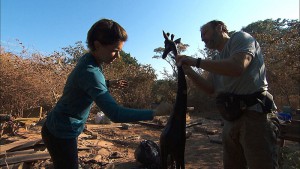 and wait until the morning to continue racing. Once they realize this, Josh & Tanner are devastated that they wasted their Express Pass. I honestly can’t believe they screwed the plan up so horribly; it seemed foolproof, but apparently Tanner & Josh are a little too foolish for their own good. It does make the show more interesting though, because now it’s everybody’s guess as to who will be eliminated. At 8:00 am the next day, Josh & Tanner and Diana & Justin get their next clue, which is a detour. In Wood, teams must finish off (stain) a wooden carving that has been hand-crafted by a local artist. Croquet requires teams to score 5 points against a local player in a round of croquet. Tanner reveals that he and Josh have no idea who they will give the Express Pass to now, they might just give it to the team that comes in behind them (unless it’s Justin & Diana). Kelsey and Joey have a great croquet strategy, where Kelsey tries to knock the pro’s ball out of the way so Joey can score. 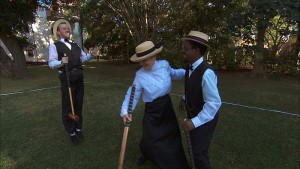 Diana & Justin finish Croquet first, and receive a clue telling them to go to the pit stop at the Rose of Charity orphanage. Tanner & Josh finish right behind them, and both teams are searching for taxis to take to the pit stop. Logan and Chris have been arguing throughout this leg, and Chris keeps getting the stain on Logan’s face despite her asking him to pay attention multiple times. Wood seems like a tougher challenge, as the judge is very critical of the staining process. After the stain dries, teams must cover it in polish. Denise & James finish Croquet, followed by Kelsey & Joey. Justin & Diana reach the U-turn fist and decide not to use it, then they donate all of their money to the kids at the orphanage. After telling Justin & Diana that they’re in 1st place, Phil says that the leg isn’t over, and hands them the next clue. Tanner & Josh don’t use the U-turn because their target came in 1st place. Phil asks Tanner & Josh to decide who they will give the Express Pass to, and the episode ends before the guys make a decision.

Who do you think Josh & Tanner should give the Express Pass to? Although it’s possible they might give it to Kelsey & Joey, I’m guessing they’ll choose a weaker team, like the cheerleaders. Let me know what you thought about this surprising episode in the comments below!