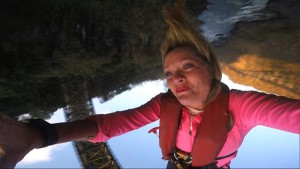 James & Denise started off this leg of The Amazing Race at 5:40 am, with the first clue being a roadblock. Phil starts talking about a sponsor of TAR, Fitbit, and how teams have to record their heart rate after each challenge throughout the leg (apparently they’ll need this info later in the race). The roadblock requires one team member to bungee jump 364 feet off the Victoria Falls Bridge. The roadblock doesn’t start until 7 am, so all of the teams have caught up when Denise bungee jumps. After finishing this roadblock, teams will fly to Paris, France. All teams are on the same flight to Paris, and once the plane lands it’s a race to the trains. The green team are the only ones on the first train, which puts them in the lead when they arrive at 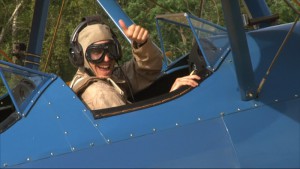 another roadblock. In the roadblock, racers will fly in a Boeing-Stearman (a vintage training biplane) and look for the three words that best represent the French revolution: Liberte, Egalite, and Fraternite. The team member that didn’t complete the first roadblock of this leg must do this roadblock. After Justin finishes the challenge, he and Diana head to Square Louise Michel to get their next clue. 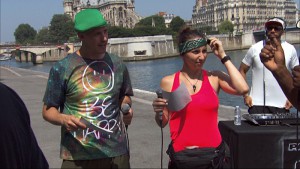 Josh and Tiffany complete the roadblock, but Logan doesn’t see the last word, so she has to go again.
Since she has to wait for one of the other three teams to finish the task (because there are only 3 planes), this mistake puts Chris & Logan in last place. Logan sees the word “Fraternite” on her second try, which gives her and Chris 6 minutes to get to the train station before the train with 5 of the other teams leaves. Chris & Logan don’t make it to the train station in time, so they have to wait another hour for the next train. In Paris, the green team maintain their lead as they reach the detour. In Drops Mic, teams have to rap a platinum hit while being judged on their pronunciation, rhythm, and vibe. Bust A Crab requires teams to shuck, crack, and split seafood to create and decorate the restaurant’s signature dish. Justin & Diana disagree on which detour to choose, but they go with Justin’s pick, Drops Mic. Diana and Justin both struggle to learn the French lyrics, but they decide to try it. The 5 teams from the second train are wandering around the square aimlessly, unable to find the man with their clues. Eventually they find him, while at Drops Mic, Diana has problems with pronunciation and rhythm.

Finally, Justin & Diana complete the detour on their 4th 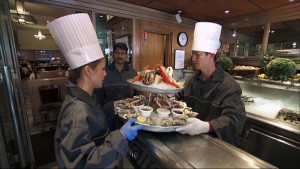 attempt and get their next clue, which is a postcard with a photo of a bridge. Chris & Logan get the detour clue while Tanner & Josh and Rick & Cindy try Bust A Crab. The green team finds their next clue on the bridge, which tells them to go find Phil across from the Arc De Triomphe. Joey & Kelsey make a first attempt at Drops Mic, but Kelsey basically yells the words and is stopped by one of the rappers. Krista & Tiffany have a great time rapping, and they get the clue on their first try. Cindy & Rick finish Bust A Crab while Tanner & Josh are struggling. Denise & James have been lost in Paris for a long time, looking for the detour. They eventually find Drops Mic, and James seems to have a knack for rapping while his mom isn’t doing so well. Josh & Tanner complete the detour while Logan & Chris walk in, which of course Chris has to complain about. If I were him, I would be happy to see such a strong team even remotely near me in the competition while I was in last place, because it shows they’re struggling too. Justin & Diana look for Phil at the Arc De Triomphe until Diana has them reread the clue, and they go to look for Phil across the street. 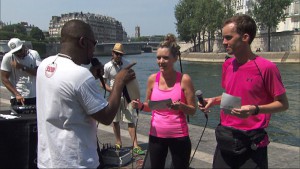 Cindy & Rick’s taxi driver took them right past the bridge the clue was on, and took a while turning around. Denise really can’t get the hang of rapping, and Logan & Chris’s first dish gets rejected. Chris & Logan figure out and correct their mistake, and finish the detour. Diana & Justin arrive at the mat in first place, only to have Phil tell them to keep racing (again). Understandably, they’re a little disappointed that they don’t get a break at the pit stop. Tiffany & Krista come in 2nd place, Kelsey & Joey are 3rd, Tanner & Josh get 4th, and Cindy & Rick are in 5th place, and Logan & Chris are in 6th place (which they’re shocked about). James & Denise are still struggling to rap after over 15 failed attempts when the episode ends in a cliffhanger. What do you think will happen on the next leg of The Amazing Race? Do you think James & Denise will be eliminated? Since this leg was another no pit stop leg, I’m guessing they won’t be eliminated at the start of the next episode (although they may be eliminated at the end of the leg). Let me know what you thought about this episode of The Amazing Race season 27 in the comments below!