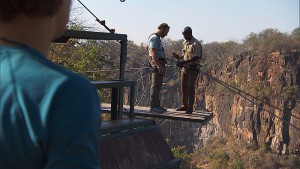 This episode began by recounting last week’s cliffhanger ending; at the mat, Phil told Tanner & Josh that they needed to choose which team to give the Express Pass to right then. Josh & Tanner pick team mother/son, because they’re the weakest competition. Phil gives the guys their next clue, which directs them to Lookout Cafe. While Justin & Diana and Josh & Tanner are on their way to the cafe, other teams arrive at the Double U-turn. Denise & James are overjoyed when Phil reveals that Tanner & Josh chose to give them the express pass. At the Zambezi River, Justin & Diana encounter the roadblock. Take a Big Swing requires one team member to repeat the first ever challenge of TAR, a zipline over the river. This challenge looks pretty easy, unless you’re afraid of heights, and there’s a spectacular view. After Justin finished the roadblock, he and Diana received a detour clue. In Crocs, racers are submerged in an underwater cage while they feed crocodiles raw meat. Canoes requires teams to paddle a canoe across a section of the Zambezi River, then one racer must hoist their teammate to the top of a tree (on a cable) to get their next clue out of a bird nest.

At the fake pitstop, Chris initially gives $20 to the orphanage, unlike the rest of the teams, who donated all of their money. Once Phil points this outs, he convinces Chris to donate the rest of their money, $155. I understand that it’s a race and they obviously need money to race, but they should’ve just donated all of their money from the start, and hoped that they would get more money on the next leg. Jazmine & Danielle get to the pit stop in second-to-last place, and they decide not to u-turn the cheerleaders. When the cheerleaders arrive, they see Jazmine & Danielle leaving, and contemplate over whether or not they should u-turn the green team (Justin & Diana). Even though they realize that the green team “probably” already passed them, the cheerleaders decide to stick to their word and u-turn Diana & Justin. I don’t think I need to explain how much of a giant waste that u-turn was, except maybe to Krista & Tiffany. Phil watches this in amusement, then tells the cheerleaders that they’re in last place – but they aren’t eliminated. At Canoe, the green team and Josh & Tanner worry about the crocodiles in the water. 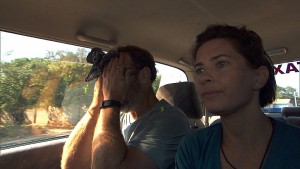 Cindy & Rick and Logan & Chris reach the roadblock, then get confused after reading the clue and get back in their taxis instead of following the path to the actual challenge. Jazmine & Danielle pass the two teams leaving the roadblock, putting them in 5th place instead of 7th. Eventually, Rick & Cindy’s taxi driver explains that they already were at their destination, so both taxis turn around. Tiffany & Krista get to the roadblock and are shocked to learn that they’re not in last place, thanks to the other teams’ mistakes. When Chris realizes that they’re now in last place thanks to a silly mistake, he’s not too happy. That’s just how The Amazing Race is – you can’t afford to make mistakes, period (especially this far into the race). However, teams still have to face the detour, so the order could change before the pit stop. Justin & Diana finish Canoe relatively easily, and are off to the Lion
Encounter. They then have to paddle back to the start of the detour, which the green team is better at than Josh & Tanner. At Crocs, Denise & James use their express pass which puts them in 3rd place. Joey & Kelsey are the first to feed the crocodiles, which is so much faster than the other detour. It definitely seems a little claustrophobic, trapped in a cage with crocodiles surrounding it.

The green team reaches the Lion Encounter, where the 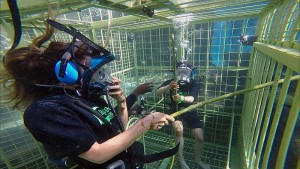 clue instructs them to walk with the lions as they search for their next clue. Before they walk with the lions, racers are informed of the various safety rules. Denise & James had to change out of their bright pink clothes so as to not attract the lions’ attention. Kelsey & Joey arrive at this challenge just before Tanner & Josh, proving how much faster of a detour Croc was. The final four teams are now at Croc: Jazmine & Danielle, the cheerleaders, Cindy & Rick, and Logan & Chris. When Chris learns that they’re behind three other teams, he decides that they should switch detours. Logan convinces Chris that they should stay, but he still continues to whine about the possibility of switching. When the cheerleaders are in the cage, one of the crocodiles freaks out and starts pulling the pole that had food attached out of the cage. The cheerleaders won’t stop freaking out, until finally one of the professionals got the stick back from the crocodile. Meanwhile, Chris complained enough that he convinced Logan to switch detours, then kept arguing about the decision while they were changing their clothes. Finally, Chris & Logan put their wetsuits back on to wait for Rick & Cindy to complete the detour. 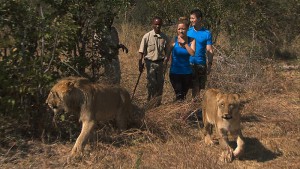 Diana & Justin find the clue inside a skull, which tells them to go to the pit stop at the Masuwe Private Game Reserve. In order to keep things interesting (according to Phil) teams have to each carry a bucket of fruit on their head to the mat. It’s the green team vs. team mother/son for first place, with the twist that each racer must have all the fruit in their basket in order to check in at the mat (if they drop fruit, they have to stop and pick it up). Justin drops his fruit as he and Diana are trying to catch up with team mother/son. James & Denise come in first place and win a trip for two to Slovakia. Justin & Diana come in 2nd place, which Justin is very unhappy about. Jazmine & Danielle’s taxi takes them to the pit stop before taking them to the Lion Encounter, so they have to run back to the challenge. Tanner & Josh get 3rd place, and Joey & Kelsey are in 4th place. 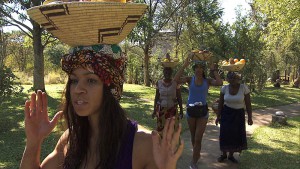 Since Jazmine & Danielle didn’t see the clues in the skull they have to do the task again, but they have to wait for one of the two teams ahead of them to finish first. Cindy & Rick find the clue, then Logan & Chris find it. Tiffany & Krista get 5th place, and it’s now a three-way fruit basket race to the pit stop. Both Chris and Rick had a lot of trouble initially, but they eventually figured it out. Chris & Logan come in 6th place, and Rick & Cindy get 7th place. Danielle & Jazmine & Danielle come in last place and are eliminated from the race. What did you think about this leg of The Amazing Race? There were a lot of silly mistakes, the biggest being Jazmine & Danielle ignoring the skull because they didn’t read the entire clue. Let me know who you think will be eliminated next in the comments below!