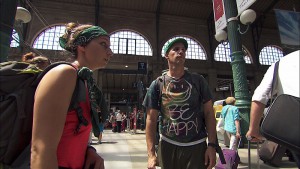 This is the second consecutive leg that racers haven’t have a pit stop  (there’s been a total of three episodes without a pit stop). Team Alabama is still struggling to rap while the green team is off to Rotterdam. All teams are booked on a 7:00 pm train, but Justin & Diana get standing room only tickets on a train that leaves at 4:19 pm. Finally, James & Denise complete the detour! Tanner & Josh decide to go sightseeing until the 7:00 pm train arrives, while other teams are buying new tickets and leaving France. Once Diana & Justin arrive in Rotterdam, they have to take a tram to a red boat. The green team reaches the boat first and gets a start time of 5:00 am the next morning. The last team to arrive will leave at 6:30 am. Tanner & Josh realize that they shouldn’t have wasted time sightseeing when the teams they thought were behind them aren’t on the 7:00 pm train. Cindy & Rick thought that Rotterdam was the same city as Amsterdam (because that makes so much sense), so they missed the correct stop on the train. The cheerleaders get to the boat second, followed by Cindy & Rick. 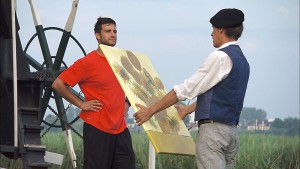 Teams sleep on the boat overnight, and in the morning Diana & Justin open a clue telling them to take a water taxi to a windmill village. The clue also says that teams should watch their steps, because every step counts, so I’m guessing the team with the most steps this leg will win something. Justin & Diana walked to the terminal instead of taking a taxi like other teams, which Justin blamed on Diana. The cheerleaders are the first to reach the roadblock. State of the Art requires racers to search among the windmills to find an exact replica of Van Gogh’s sunflower
painting. The roadblock is harder than it seems, because teams have to run quite a bit from the windmills with the paintings to the judge, then back to the easel if the painting is incorrect. Joey gets it right on his first try, and he now has to calculate the difference between his highest heart rate in the last leg and his heart rate now. Then he has to deliver that exact number of tulips to a woman in order to get his next clue. Rick completes the roadblock, followed by Cindy, which makes Justin more annoyed as he watches Diana struggle with the challenge. 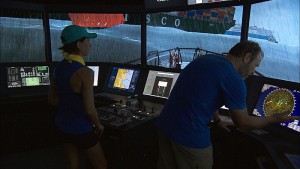 Kelsey & Joey deliver the tulips and receive their next clue, which sends them to the Nolet Distillery. Diana finally finds the right painting, followed by Tanner, as Joey & Kelsey encounter the detour. Ship requires teams to navigate their vessel through a storm and locate two specific ships in under 5 minutes. In Skip, teams have to learn enough double dutch to skip while performing a clapping routine. All teams are now either on their way to the detour (Cindy & Rick are a little lost) or in the midst of the detour. Joey & Kelsey choose Ship, and after doing a short practice simulation, they feel confident to start the 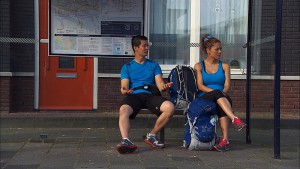 challenge. The green team passes the cheerleaders, who are waiting for the next tram when Josh & Tanner arrive. Meanwhile, Rick & Cindy are at some random bus stop, and they seem very lost and confused. Joey & Kelsey enter a room designed to look like the inside of a ship. They have to deliver the pilot to a specific ship, which Kelsey searches for as the navigator. Joey is steering the boat, which becomes difficult in the stormy waters when he has to carefully direct the boat alongside the target ship. Joey is unable to do this in the allotted time, so he and Kelsey have to start over again. 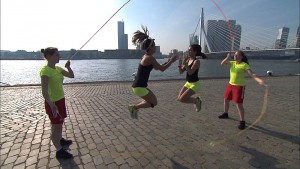 Kelsey & Joey are attempting Ship for the second time when Justin & Diana arrive. Joey & Kelsey manage to deliver the pilot, but they now need to rescue the ship by responding to an S.O.S. call. They can’t reach the ship in time, which allows the green team to try the simulation before Kelsey & Joey can attempt it for a 3rd time. Diana & Justin deliver the pilot, but Diana can’t find the sinking ship before the time is up. Rick & Cindy are still sitting at a bus stop, arguing because Rick won’t admit that they are wasting a lot of time and could be jeopardizing their spot in the race. They finally get on a bus, while the cheerleaders arrive at Skip. Kelsey & Joey get very close to finishing the task during their 3rd try, but they are still unable to save the ship in time. Krista & Tiffany decide to try the double dutch routine, but Krista messes up after 15 seconds of jumping because she’s so exhausted from the roadblock. The cheerleaders manage to double dutch for 45 seconds without messing up, putting them in first place. They now have to take a train to the pit stop at Peace Palace. It’s interesting that the green team and Kelsey & Joey have been arguing so much about who should be number 1, yet the cheerleaders might come from out of nowhere to take first place this leg. 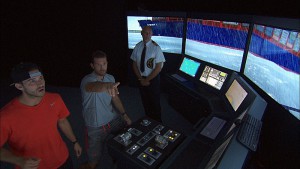 Justin & Diana finish the mission with 3 seconds to spare, putting the pressure on Joey & Kelsey as other teams arrive. Kelsey & Joey finish the task, while other teams are struggling to even navigate. Somehow, the green team gets on the first train, leaving the cheerleaders and Kelsey & Joey to wait for the next train. Justin & Diana come in 1st place for the fourth time, and get an amazing prize: Fitbit is going to pay them $31,873 (the accumulative total of their steps for this leg). Diana & Justin say they are excited to use this money for their wedding, then Phil announces that they also get a 90 minute massage. Kelsey & Joey come in 2nd place, and the cheerleaders are in 3rd place. Tanner & Josh complete the detour, followed by Logan & Chris, leaving Rick & Cindy 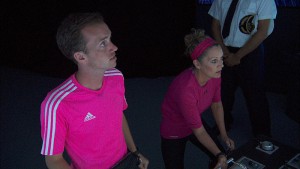 in last place behind team Alabama. Only now will Rick acknowledge that Cindy isn’t being pessimistic by pointing out that they are in trouble. Denise & James finish the detour, then finally Rick & Cindy complete the challenge. The two teams are at the train station together, but Cindy & Rick take a train that has two stops, leaving team Alabama to wait 7 more minutes for their direct train. Josh & Tanner come in 4th place, followed by Logan & Chris in 5th.

Rick & Cindy talk to a local women on their connecting ride, who tells them that they are on a tram headed to the beach, which is in the opposite direction of the pit stop. Perhaps Rick will finally take a second look at his navigational skills now, but I doubt it. As team Alabama boards their direct train, Cindy & Rick follow the directions of the locals and get off at the next stop, then board the correct tram. When Denise & James reach the mat, Phil asks if they already know what he’s going to say. Of course, team Alabama replies that they’re in last place and are going to be eliminated. Phil tells James & Denise that they are actually in 6th place, and they’re overjoyed to still be in the race. Rick & Cindy reach the mat in last place and are eliminated from The Amazing Race. I definitely think that they were the weakest team this leg, and eventually their navigational mistakes caught up to Rick, despite his refusal to admit it. Now that there are only 6 teams left, the competition is getting more intense. Let me know what team you want to win TAR season 27 in the comments below!