To start off this leg, teams will be driven to Swakopmund, where they will go to the local bookstore and scour the paper for their next clue. The hairdressers tell us that they’re planning to work together with Laura & Tyler because they want to U-turn Jenny & Jelani. Once the two leading teams find the clue, the hairdressers speculate that they might be going to Germany because the clue is written in German. Laura corrects them and tells them it’s in German because Namibia was once a German colony. The two teams go to a hotel to have the ad translated, while Hayley & Blair ask a local. They both learn that they will be going to a skydiving club. The men are very excited, but it turns out that this roadblock won’t involve any racers skydiving. In Airdrop, one member will watch a skydiving instructor throw a dropbox out of a plane, then they must navigate (on foot) to the box, which will be about a mile away. Both Laura and Ashley choose to do the roadblock, assuming that they’ll just have to skydive, not run and search for a box. Jenny & Jelani are having troubles making it to the roadblock, as their car has a nail in one of its tires. They’ve stopped at a gas station, and one of the attendants manages to take out the nail and plug the hole in the wheel. 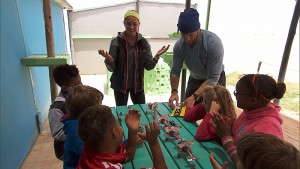 Ashley returns to the start with the clue, which instructs them to drive themselves to Snake Bend Pan and search for their next clue. The lawyers arrive at the roadblock at the same time as Mike & Rochelle. Since they are the only teams there, Jelani & Jenny decide to save the express pass (which they must use this leg) for the detour. Aly & Steve reach the roadblock, but first they must complete their speed bump, which requires them to make toy planes out of coke cans for children. The hairdressers and Laura & Tyler have reached the detour. Work requires teams to smooth out five miles of 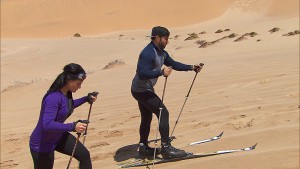 ridged dirt road by dragging 5 tires behind a truck. In Play, teams will sand ski; after instruction, they must strap on skis and follow a marked path up, over, around, and then down sand dunes. The hairdressers choose Play, while the other two teams pick Work. Mike finally finishes the roadblock, and the olympians complete the speed bump. Steve ends up going in the wrong direction, which Aly notices immediately. After what might’ve been hours of wandering, Steve gets the box. Work seems to be pretty easy, aside from the strength needed to move the giant tires. Ashley & Matt have climbed the course, and at the top an instructor has them take off their skis and slide down the mountain on a makeshift sled. They then have to walk to the double U-turn. Laura & Tyler finish the detour as well, and head off to the U-turn while the lawyers arrive, planning to use their express pass at Play. 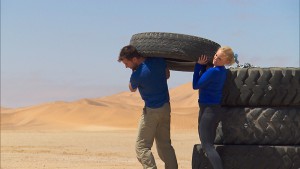 The hairdressers U-turn Jelani & Jenny, while Laura & Tyler U-turn Aly & Steve. I don’t really think it was wise for Laura & Tyler to U-turn the olympians, because the olympians were so far behind anyways, and now they don’t have a U-turn anymore. Ashley & Matt are now off to the pit stop, Goanikontes Oasis. According to Phil, teams can pick an exotic animal to bring to the pit stop with them “just for fun.” Mike & Rochelle choose Work, and they seem to be doing better than most teams, because Rochelle is very strong, so they’re not relying on just one teammate. The hairdressers and Laura & Tyler are now racing for first place. Matt & Ashley were initially in the lead, but they had to go back to the car because Ashley forgot their Travelosity gnome. Tyler has named their zebra Nora, and she seems a lot more cooperative than the 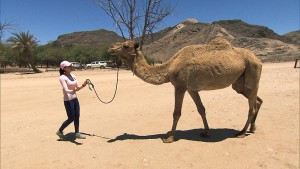 animal (I’m honestly not really sure what it is) Matt is dragging along. All of a sudden, Nora freaks out and starts kicking at Tyler, but he manages to get her calm again. Laura & Tyler come in first place and win a trip to Queenstown, New Zealand! Matt & Ashley get 2nd place, and Hayley & Blair (and their camel Dave) come in 3rd place. The olympians choose play, while Mike & Rochelle and the lawyers finish work. Mike decides to bring a zebra to the pit stop, until it revolts and kicks him. Jelani & Jenny are in 4th place, and Mike & Rochelle come in 5th. Unsurprisingly, Aly & Steve come in last place and are eliminated.

What did you think about this leg of the race? Who would you have U-turned, if you had the chance? Let me know your thoughts in the comments below!