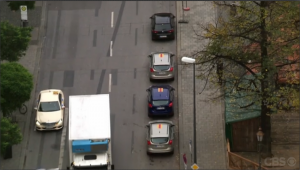 After what felt like a ridiculously long break (but was actually only two weeks), The Amazing Race is back! This episode started with teams learning that they will be flying to Munich, Germany, where they will go to a clothing shop and pick out proper attire in order to be part of Oktoberfest. All of the teams are on the same flight to Munich, resulting in a foot race to the clothing shop. After changing into their costumes, teams must search for their next clue at Alter Peter Tower. At the tower, Laura & Tyler learn that they will have to climb to the top to look for Ford Focuses on the street below, then drive themselves to their next clue. Laura & Tyler get in a car, then decide to switch to the car in front so they don’t have to go in reverse at all, but they forget their fanny pack in the move. JJ were in second place, but they got disoriented so Jeff decided that they should go back to the top of the tower to look for the cars again. Jackie was upset with Jeff ignoring her opinion, and then yelling at her to hurry up when they eventually found a car. Many couples seem to be arguing right now, although Hayley seems to be mad at Blair for no reason at all. It could totally just be editing, but she’s getting on my nerves.

At the factory, the olympians get a clue telling them to drive their car in reverse through a winter 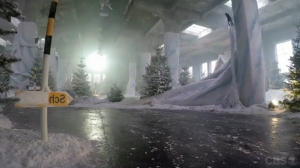 wonderland. They must use the rearview camera to piece together their next clue. When Laura tries to get a pen from the fanny pack, Tyler realizes that he left it in the back of the blue car. Tyler says they should do the challenge and then wait for the other car to arrive, but TAR usually has at least one extra car, so I think they might be in trouble. The olympians correctly spell/pronounce the clue, and are now off to Schliersee. In the car, JJ reconcile when Jeff apologizes for yelling and telling Jackie to shut up. Meanwhile, 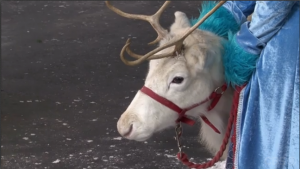 Bergen is having trouble driving a stick shift, so Kurt says that they should just take a cab and accept a penalty. Bergen is understandably upset about this, because he was able to drive, just not smoothly. Once again, one of the things you need to know how to do if you’re going on TAR is drive a manual transmission! I don’t think Bergen should have given up so easily, though; teams are composed of two people, and he could have insisted that he was doing fine driving the car. The lawyers are also having trouble driving, and Mike & Rochelle (who are in the blue car) are very lost. Aly & Steve arrive in Schliersee and have to row a boat to their next clue, then row it back to the shore.

Teams finally have a real challenge – a detour! In Stein, teams need to carry 22 steins of beer at once (with each teammate carrying 11 steins) and deliver them without dropping any to receive their next clue. Stack requires teams to make a tower out of empty beer crates; they are strapped into a harness and must stack 15 crates on top of each other. Laura & Tyler are still waiting for the car with their fanny pack to arrive. The hairstylists pass them, then Hayley & Blair show up in a blue car, but sadly it isn’t the right car. I think it probably would have been faster to drive back to where the cars were and get the fanny pack before completing the driving challenge, but I do understand that they had no idea if someone would have taken their car already. Tyler & Laura witness Hayley freaking out at Blair (again for no reason) and have a good laugh. I think it’s pretty safe to say that the only blind date couples with a chance at romance are Laura & Tyler, JJ, and the lawyers.

Aly & Steve complete Stein, and are off to the Markus Wasmeier Museum. Bergen & Kurt arrive at the 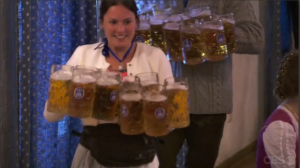 challenge, only to discover that they can’t complete it because they don’t have a car, so they receive a two hour penalty. The olympians arrive at the roadblock, Singing A Different Tune, which requires one team member to sing in German. If they forget the words or are off-tune, they will be doused with cold water. JJ make it to the challenge and lie to Tyler & Laura about the fanny pack (which is in their car), but Laura finds it anyways. I think it was pretty stupid to lie, because obviously Laura & Tyler would search the car anyways. There’s really no point in creating enemies for no reason. Laura & Tyler discover that either Jeff or Jackie shoved their fanny pack under the seat in an attempt to hide it. Aly forgot one of the words to the song, so she got doused in water and has to try again. She gets it correct the second time, and receives a clue instructing them to go to the pit stop Lake Spitzingsee. Mike & Rochelle are still incredibly lost, making it a race between them and Bergen & Kurt, who are still waiting out their two hour penalty. 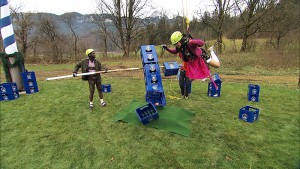 Even though Blair is carrying more steins of beer than her, Hayley keeps dropping hers. To his credit, Blair doesn’t say anything negative to her, although he also doesn’t offer any words of encouragement (can you really blame him?). The hairstylists pass Hayley & Blair, making them team number two (so far). Hayley & Blair have yet another argument as he tries to help her get a grip on the steins and she keeps saying that she already knows everything he is telling her. Finally, Blair & Hayley decide to just switch detours. Ali & Steve reach the pit stop in first place, and they each win a 2015 Ford Focus. Poor Phil sounds like he has a cold, I hope he got better soon! JJ, the lawyers, and Laura & Tyler choose Stack, which seems incredibly difficult. One team member has to climb the stack, while the other hands them crates. As if that’s not challenging enough, after the 10th crate they aren’t allowed to hold the stack in place. At first, every team thought it would be best to let the girls climb on the crates, but after it didn’t go so well, both Blair and Tyler switched to climbing. Blair is doing a lot better than Hayley did at climbing, because he is balancing himself well. Matt & Ashley arrive at the pit stop and get 2nd place. Blair was putting the last crate in place when he fell, knocking the entire tower over. 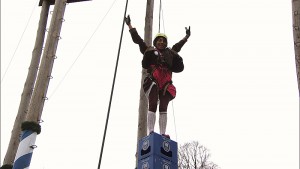 penalty to be over. This is why you shouldn’t give up on anything on the race (or at least not until you’ve been at it for a few hours); Kurt & Bergen (well, mostly Kurt) basically eliminated themselves, plus they had to endure the torment of watching everyone pass them until they were in last place. Honestly, I feel bad for Bergen, because he kept saying he felt like Kurt wasn’t really in it to win it, and that definitely showed today. Even though Kurt’s family is well off, I’m not sure how anyone could willingly give up half a million dollars. Jackie finishes putting the last crate on top of the tower, followed by Tyler, then Jelani, and finally Blair. Although everyone tried to stand on the top of the crates once they finished the tower, Jackie was the only one to successfully do so before falling (this wasn’t required, and everyone still received their next clue). Bergen & Kurt finally receive their next clue, although I’m not sure how they’ll be able to afford what must be a super expensive cab – especially because they can’t rely on Kurt’s family money. At the roadblock, the 4 blind date teams are together again, and Tyler and Jeff seem to be getting along well. 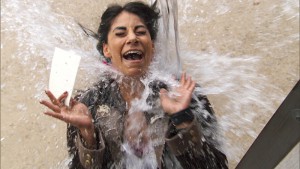 Turns out Bergen & Kurt decided to take a train instead of a taxi (so I guess they’re still capable of making some smart decisions). On her second try, Jackie aced it. Like seriously, I thought they were auto-tuning her voice somehow. Is she secretly an opera singer? Blair got it on his first try, despite Hailey laughing at him. Jeff & Jackie are team number 3, Jelani & Jenny are 4th, Blair & Hayley are 5th, and Laura & Tyler are in 6th place. Rochelle is freaking out being up on the crates because she is afraid of heights, but Mike talks her through it and they complete the detour! Mike finishes the roadblock on the first try, and they’re off to the pit stop, while Bergen & Kurt are wandering around looking for the detour. Mike & Rochelle come in 6th place and they’re all adorable and happy. After that, Phil goes to the train/bus station – I’m really not sure what it is, it seems like some random building – and eliminates Bergen & Kurt from the race. Phil asks about the tension between them, and Kurt says there’s no tension, he’s not bitter. Obviously he’s not bitter, he apparently doesn’t need the money and he made the decision that eliminated them. Bergen is understandably upset, as he cries and swears in his elimination interview. Kurt says that it wasn’t meant for them to win the million; all I can say right now is that I understand why Kurt has never been in a relationship.

Well, that started out as a boring episode, but it had one of the biggest WTF moments ever – I’m pretty sure no team has even just voluntarily given up their car. I think I should take this time to apologize to Jackie, because in my cast preview blog, I wasn’t very kind to her. Jackie, I just have to say, you completely won me over! As of right now, my favorite teams are: Tyler and Laura (duh), Jeff & Jackie, and Jelani & Jenny. I do have a soft spot for Mike & Rochelle, but I doubt they’ll last much longer in the race. Let me know what your thoughts were about this episode in the comments below!