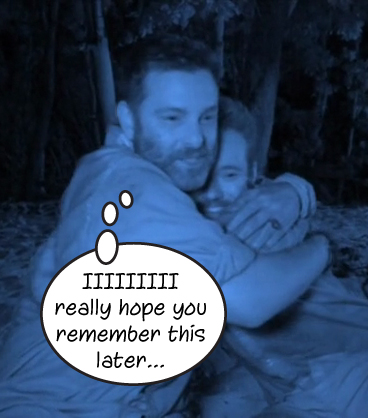 This time on Survivor… After Tribal Council, Debbie is very happy to be with Nuku, where she belongs, and comments to the rest of the group that Tribal was scarier than Exile! She lies when people ask her about Exile because what happens on Exile, stays on Exile and she doesn’t want to let Cochran down. Ozzy takes a poke at Tai by stating that HE is happy to still be around, and Tai keeps things light by saying that there is no way Ozzy was actually worried; Ozzy says that he was actually ready to vote out Tai! That’s how worried he was at Tribal. Lunettes de soleil Ray Ban To us, Tai says that he was very confused by things said at Tribal, and Ozzy is a huge threat to win a bunch of Individual Immunities so he did what he felt he had to do by bringing up his name. Later, Zeke apologizes to Varner about not letting him in on the Sandra vote and Varner gets it, he’s done the same thing, BUT – he would have voted out Sandra with them and not told her a thing. Zeke also lets Varner know that he would like to take Varner to the end with him, not a seat on the Jury, a seat next to him at the Final Tribal and Varner is down for this. They hug it out and it’s all friendship. 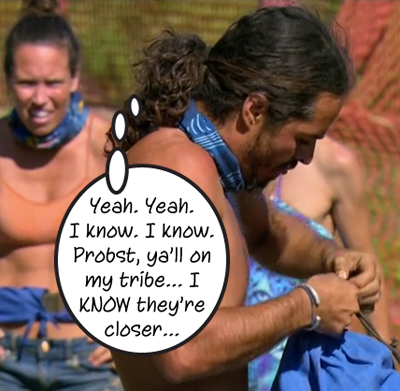 Come on in, guys! It’s time for Reward. Up for grabs? TEN PIZZAS and soda! In this challenge, tribes will unspool ropes around a pole to release a key, untie wooden planks to build a ladder to reach a bag of balls, which they will use the key to retrieve. Next, all tribe members must squeeze themselves through a net sling to reach the final stage of the challenge where one tribe member will launch the balls into five targets on a slanted wall using a catapult. Survivors ready? GO! Sooo, Nuku is first to release their key, the first to build the ladder, the first through the net sling… Nuku is doing very well, but Mana is nipping at their heels at every stage. When Ozzy begins to untie the bag to release the balls to begin working with the catapult, Mana begins working their way through the sling. Buuut, by the time Mana is through the sling, Ozzy has already landed a ball for Nuku, then he lands another, and another before Sierra has launched one. asics gel kinsei 5 peso Brad takes over launching for Mana, buuut… it’s all over because Ozzy is a beast and he lands the last two balls for Nuku. A very unhappy Mana walks back to camp without pizza and soda… 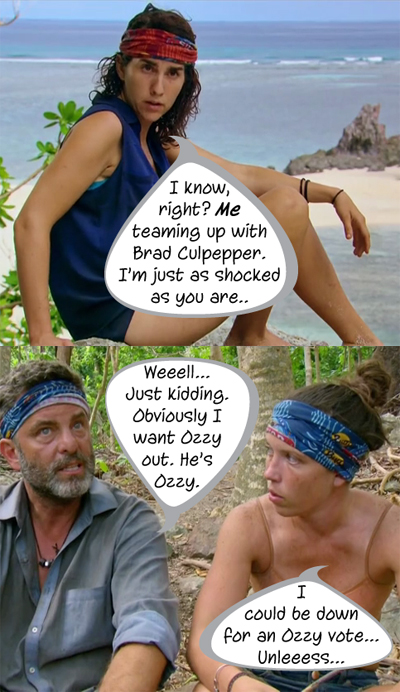 At camp, Mana is very bummed about not winning pizza, but losing the reward has triggered almost everyone’s emotions. Aubry mentions how people kept asking why she was different when she got back from playing the first time and she couldn’t explain it. Her tribe understands it though, they’ve all been through this before. Sierra admits that right before she left she was asking herself why she was doing this again.

Brad opens up about how he thought Monica was different when she got back from playing the first time, and even after Blood vs. Water he didn’t quite get it, but now, having been around so long… He totally gets it. And everyone except Troyzan and Michaela are shedding some tears, then Brad says he’s good, he’s good, and he heads to the beach to do some laundry. Aubry takes this opportunity to talk to Brad alone and she t hanks him for opening up about Monica. She tells us that she thinks Brad is the most genuine person she’s met out “here” and she’s just constantly amazed by it. Cirie is equally impressed and has a private chat with Brad too and Brad loves it. He’s very happy to have solidified a better relationship with Aubry and Cirie because now he has a solid group of five with the two girls, Sierra, and Troyzan. At Nuku, everyone is really loving the pizza, weeell, everyone except Varner because he’s still on the bottom so this reward means nothing to him. nike tn requin pas cher He knows he needs to make a move to keep himself in the game and he wants to make it against Ozzy because he IS a beast and he’ll win every single Individual Immunity. Later, Varner is with Sarah talking about wanting to work with them, yeah he has people on the other side who they could pull into their group, and he tells her his target would be Ozzy. And Sarah kind of agrees that it may be time to kick Ozzy off the island because yeah, she would like to win that necklace a few times and that Merge is getting closer… 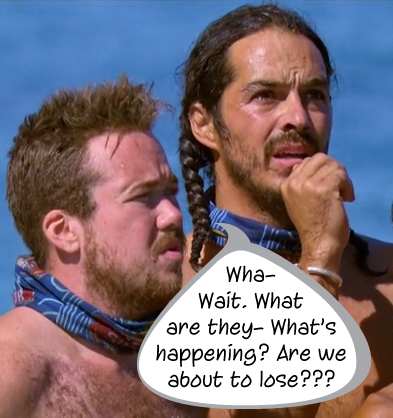 Come on in, guys! It’s time for Immunity. In this challenge, tribes will begin on a platform in the ocean, swim to a raft, board it and use a pully system to pull themselves to shore stopping at three stations where one tribe member will dive down to release buoys with letters on them. After all 13 buoys have been collected in a bag, they can pull themselves to shore where they will use the buoys spell out a word: Metamorphosis. Survivors ready? GO! Nuku takes the early lead; with Ozzy the Beast diving down to gather buoys they zip right through this part of the challenge while Mana struggles to stay one set of buoys behind them. So obviously, Nuku is first to the puzzle platform and Varner, Debbie, and Andrea get to work on the letters. When Mana finally arrives at the puzzle platform, Cirie, Sierra, and Michaela desperately try to make up time. When they decide to try something with “Meta”, they quickly see the word starting to form and before you know it – they’ve spelled out Metamorphosis and Mana has won Immunity. Varner is not happy and he’s gonna do whatever he has to do to ensure he’s not the one going home… 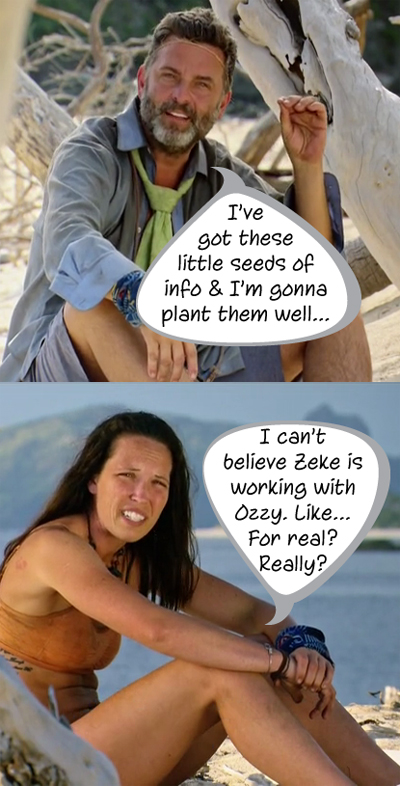 After the challenge and back at camp, Varner lets everyone know that he is aware that it’s his head on the block and asks for the opportunity to talk to everyone individually to make his pitch and then he can be at peace with what will happen at Tribal. Everyone is cool with this then Varner asks if anyone needs/wants water – Ozzy stands up to accompany him to the well. Adidas NMD Heren While they are gone, Debbie, Sarah, Zeke, Tai, and Andrea talk about the upcoming vote.

Debbie puts it out there – if they were to vote right now, she would vote Varner. Sarah says her gut is telling her to vote Ozzy, she trusts Varner a lot more than Ozzy, she doesn’t think Ozzy will stick around with them for a few votes, but that’s just her perspective – she’ll vote how they want her to vote. Andrea is conflicted. Charlotte Hornets Zeke really wants to keep Varner around, buuut… He tells us he doesn’t want to get rid of Ozzy yet either. Ozzy is a good meat shield. Alone with Varner, Zeke lets him know that he is doing everything he can to keep him around, but he’s not sure that he can swing it, oh, and Andrea and Sarah will probably act like they are with him. Nike Air Max Norge Nettbutikk Varner understands and tosses Ozzy name out there, but Zeke is hesitant to jump on board with it, which, in addition to the comment about the girls, causes Varner to think that Ozzy and Zeke are working together and he tells Sarah and Andrea about his suspicions. Varner also tells the girls that Zeke brought up their names and the girls are NOT happy about this. Varner ALSO says he knows something about Zeke that no one else knows, that is insignificant to the game, but he will NOT go quietly off this island… 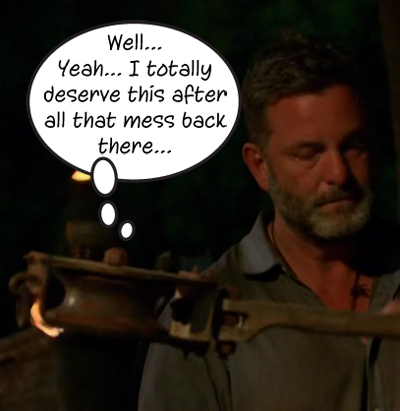 So, awaaay we go to Tribal Council… Jeff immediately brings up the fact that Varner was on the bottom with Sandra last week, Sandra’s gone now so is Varner still on the bottom now? Oh yeah.

Varner knows he’s going home tonight, he talked to everyone and he knows. Debbie comments that she’s just preparing herself to be shocked. Then Varner begins to stir the pot and at first, he’s not doing a bad job of it. He throws Zeke and Ozzy under the bus saying that they have a secret alliance that no one knows about, there is deception going on, and they can end it right now by voting out Ozzy. Debbie says it’s a good pitch. Buuut… That’s where the brilliance of Varner’s strategy to stay in the game ends. Debbie was waiting to be shocked and shocked she is by what Varner says next. It’s not pretty and everyone, including Jeff, is immediately offended. So, Varner outs Zeke as Transgender by asking why he hasn’t told anyone here about it. Silence. He defends himself saying that it’s a deception and has nothing to do with the game, but it shows how easily Zeke can lie to them all. Aaand… Varner is eliminated from the game. Nike Air Max 90 Donna They don’t even vote. Everyone is very disappointed in Varner, even Jeff lectures him about the wrongness of his actions, and before he leaves, Varner does agree that it definitely crossed the line, he apologizes several times, but the damage has been done. Zeke actually handles all of this very well, he doesn’t get angry, and even though he doesn’t have to explain why he kept this secret, he does. Despite the fact that it’s personal and nobody’s business, Zeke also didn’t want to be known as the Transgender Survivor. He wants to be known as Zeke from Survivor, but if some good can come from this, he’s ready to embrace it. Good for Zeke! Next time on Survivor! The MERGE! As usual, if you like my blogs, check out more stuff here at Your Reality Recaps.