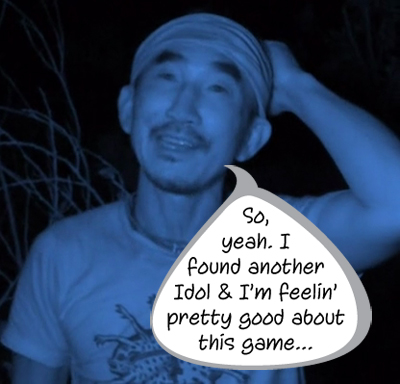 This time on Survivor… When they get back to camp, Aubry congratulates everyone else on Nuku for a really great move. nike roshe run mesh She’s been trying really hard to build relationships, but that’s out the door. She asks why they kept her and Sandra explains that revenge fueled her decision to get rid of JT – payback for his part in Malcolm’s demise. Aubry knows Sandra is the Queen and she’s hoping to learn some things from her. Over at Mana, Tai is awake while the rest of the tribe is sleeping so he decides to go look for this board he needs to moisten sooo… He goes to the water well. And guess what! He finds an Idol buried in front of one of the boards around the well. Come on in, guys! It’s time to DROP. YOUR.

BUFFS. There are mixed emotions throughout all tribes. When the packages are opened, it is revealed that one person does not have a Buff and it’s Debbie and she’s going to Exile, but first… The new Mana Tribe: Troyzan, Michaela, Seirra, Hali, Aubry, Cirie, and Brad; the new Nuku Tribe: Sandra, Sarah, Varner, Andrea, Zeke, Tai, and Ozzy. Jeff points out that Sandra and Varner are the only two from their previous tribe, but Sandra just hopes they meet HER first and that she won’t be on the wrong side of things. As for Debbie, to Exile Island she goes and Jeff directs the tribes to head back to camp. 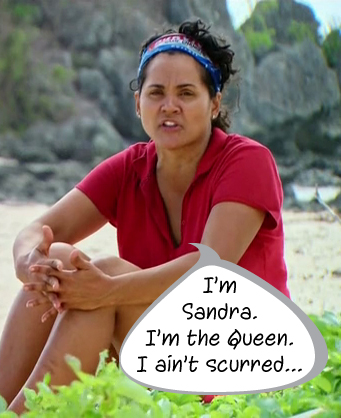 At Mana, Troyzan couldn’t be happier, but Brad doesn’t feel so great. He doesn’t really know many people, but he does have a connection with Troyzan because he played with his wife – and they are both men. So, Brad finds a moment to talk to Troyzan who is totally cool with aligning a bit with Brad. There are five women and he doesn’t want to get bamboozled by women, again, so he makes sure to solidify some loyalty with Brad.

This is great for Brad, but all he has is Brad and Sierra so he’s still got some work to do. Over at Nuku, Sandra feels pretty confident that once she gets her feet wet she’ll be back on top of things with this new tribe, buuut… Elsewhere, Zeke is telling Ozzy that Sandra has to be their target and Ozzy agrees – Andrea and Sarah do too, but they all agree that they have to make it seem to Varner and Sandra that they are both safe so they hatch a plan to tell them that they are voting out Tai. Later alone with Zeke, Tai tells him that yeah, Sandra is the obvious vote. Zeke is still worried about Tai because he’s known to be all flip-floppity so this plan could blow up in their faces. And Tai is worried about everyone thinking he’s dangerous – they could easily flip on him and put his head on the chopping block sooo… Tai heads to this camp’s water well to see if he can find a symbol on one of the boards around it – and he does! So, now Tai has two Idols and he couldn’t be happier, but he doesn’t have any idea of how he might use them. 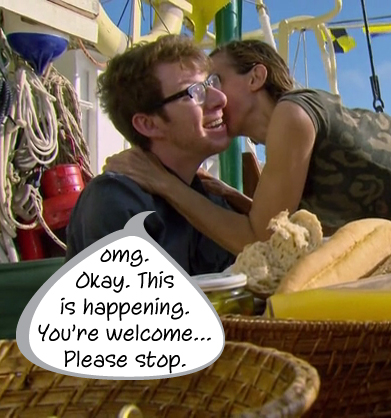 Time to head over to Exile Isl– well, not an island. It’s more like Exile Luxury Yacht. Auburn Tigers Debbie might be away from all the action, but she’s got it made on this boat. Food, alcohol, sodas, dessert – it’s definitely worth being away and no one knows! But wait! There’s more! Guess who’s coming to visit! Cochran! Debbie is thrilled; she’s met Presidents, but she is super duper extra excited to meet Cochran. new balance 420 homme bleu bordeaux So Cochran is there to help Debbie in any way he can, buuut, he’s seen Debbie play before and he knows he’s got his work cut out for him. LOL! It becomes obvious to Cochran that Debbie’s fatal flaw in the game could be over-confidence because she’s telling him that she feels really secure, she doesn’t mind being away from the other players, and that she feels really good about moving forward. He does get her to admit that she exploded at Brad, and he tells her that she should play up to Brad’s ego, because they both agree that he has one. For now, it seems Debbie is really listening to his advice. Before he goes, Cochran has a little surprise for Debbie – Advantage Options! As if things couldn’t get any better for Debbie, omg, she also gets to choose an Advantage to take with her when she joins her new tribe. There are three options: a Fake Idol Kit, an Extra Vote, and a Tribe Challenge Advantage. Pretty self-explanatory advantages and Debbie chooses the Extra Vote. Not what I would have taken – and that Fake Idol Kit is kinda silly if you ask me… So, as he leaves, Cochran tells us that he feels pretty good about Debbie’s mindset at the moment, but only time will time… 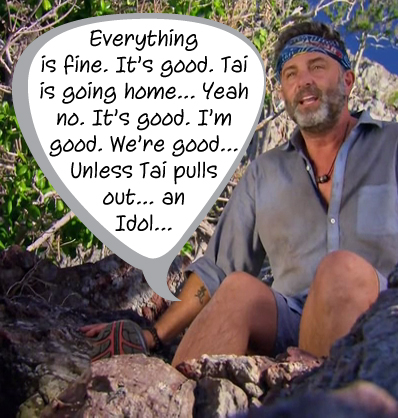 At Nuku, we see Varner and Zeke talking. Zeke tells us that he totally sees Varner as someone he could pull to his side and save later, but for now, he has to convince Varner that they are all voting Tai, which will technically blindside Varner. So, Zeke tells him that he doesn’t think Varner is on the bottom, he’s really worried about Tai and Varner feels sooo much better. Later, Sandra and Varner are alone on the beach and he tells Sandra about the plan the others have to vote out Tai. Sandra is totally cool with this, but she doesn’t trust it. Something isn’t right. It doesn’t make sense to NOT vote out her or Varner. All that matters right now is winning the challenge, then, if needed, the Queen will take control of the situation. Come on in, guys! It’s time for said Immunity Challenge! In this challenge, tribes will start at the platform in the water, dive off of it and swim to a set of monkey bars, make their way across it one-by-one, then collect barrel puzzle pieces in a sled as they make their way over another platform and back to the beach. Buty Adidas Męskie At the beach, they must use rollers to drag the sled up an incline to the designated area where they can unload the pieces and get to work on the puzzle. Survivors ready? GO! Mana takes the early lead aaand, they pretty keep it for the entire challenge. It seems that Nuku is keeping up at one point, but the incline was their demise. I mean, both tribes make it to the puzzle, but Mana is sooo far ahead by the time Nuku starts working on it that it doesn’t matter. So, Nuku has a date with Jeff, but Varner isn’t worried – Tai is going home tonight… Unless he pulls out an Idol… 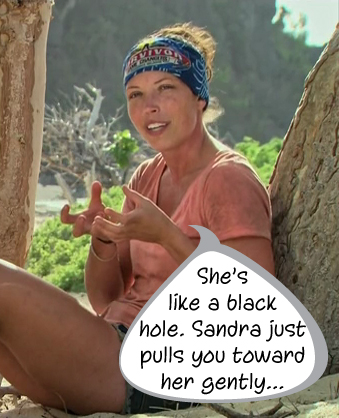 When Nuku returns to camp, everyone is bummed, but Zeke is okay with the loss because now they can kick Sandra OUT of this game. And for the first time in her Survivor career, Sandra is worried that something could go wrong. She doesn’t buy that the other want to vote out Tai so she strikes up a conversation with Zeke, Ozzy, Sarah, and Andrea – when Debbie joins their tribe, they are NOT going to want Tai, Debbie, and Aubry to be all buddy-buddy. Nike Sko Norge Nettbutikk They all kind of agree with her and Sandra vows to help them if they keep her around. Sarah can see why Sandra does so well in this game, she’s always very calm, she’s never pushy – it’s like she is grooming them and Sarah admits that it kind of sucks you into the Sandra web. Later, Ozzy, Sarah, and Andrea agree that Sandra is still the next to go, Varner definitely still thinks it’s Tai, but Sandra DID bring up some good points about Debbie, Tai, and Aubry. And Tai is so all over the place… Speaking of Tai, he’s getting nervous, he doesn’t think he’s as smart as the other players. When he’s alone with Varner and Ozzy, he mentions weird vibes he has about people leaving the area. Then… He tells Varner that he’s 100% safe, Sandra’s going home… That’s what they talked about, right? So yeah… Ozzy can’t believe Tai just spilled the beans to Varner about their plan, it was stupid, unnecessary, buuut… Come on, Ozzy… Come on… You guys didn’t tell Tai the WHOLE plan… So now, Sandra knows for a fact that she’s in trouble, but she plans on throwing Tai under the bus and twisting up everything at Tribal Council. 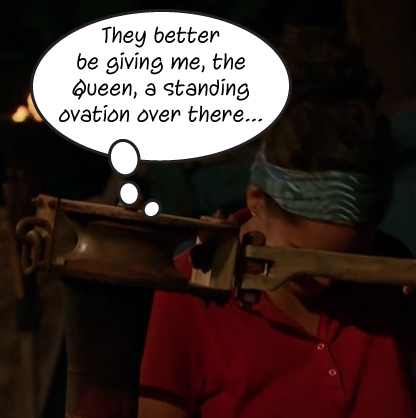 And awaaay we go! After Jeff brings Debbie into the scene, Andrea tells him that the state of the game is “get rid of the threats”, but as Jeff points out – aren’t they ALL threats? Ozzy says they all are, but some stand out more than others sooo, you just gotta make sure they take the hit before you do. Jeff notices that Ozzy was looking at Sandra who admits that she thinks this is the end for her since no one has talked to her about anything involving the vote. Now Jeff notices that Tai was staring at Sandra the whole time. Tai admits that he’s nervous about this vote, anything can happen. Sarah admits that Sandra’s name wasn’t the only name she heard being talked about and that coming into Tribal, some of them may still be open to changing their minds about the vote. Sooo, this makes Tai even more nervous because he was certain that they were all together about voting out Sandra, which is exactly what Sandra wants to hear. She tells Tai that she’ll vote with him, as long as it isn’t her, and he can whisper it to her if he wants sooo, he does. Then he tells Varner “Ozzy” and he says they need one more to make it happen. Sarah asks if he would like to just share with the rest of them… And he does. Goedkoop Adidas Schoenen Tai knows he can’t compete against Ozzy and while he’s talking, the others are whispering about changing the vote, and Sandra says that she and Varner will vote with them if they do change the vote to Tai. Zeke finally asks Tai who DOES he trust on their tribe, he thought he trusted all of them, can HE trust Tai? He’s always going off to look for Idols and finally, Varner asks if they can vote so Jeff sends them off to do so. When Jeff asks THE question, Tai does NOT play an Idol and the votes are read: Tai, Tai, Sandra, Sandra, Sandra, aaand… Sandra. Four is enough sooo for the first time, Sandra has been voted out of Survivor. Next time on Survivor! Mana is all bummed out about something, the Nuku core is imploding, and Varner sees a way to get himself further in the game. Should be fun! As usual, if you like my blogs, check out more stuff here at Your Reality Recaps.