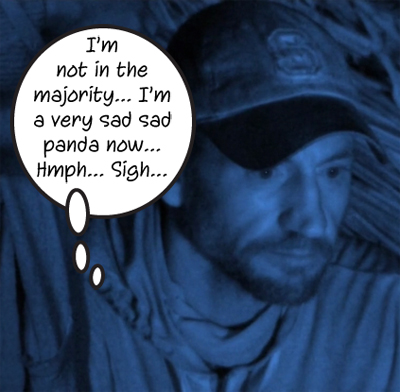 This time on Survivor… Upon returning to camp, Brad congratulates those responsible for a well-played move; he is pretty bummed to not be in the majority alliance anymore. Sarah confesses to Brad, Tai, Troyzan, and Sierra that it was she who flipped and Zeke lets them know that they voted Debbie because she seemed to be the one in charge. Cirie is happy to have taken the power away from Sierra and Brad, but she knows what game she is playing… Come on in, guys! It’s time for Reward! Up for grabs? An over-night trip to a luxury resort complete with a great meal and cheesecake! This is the challenge where one person runs through the quick obstacle course and is then hoisted up to gather numbered bags with lettered tiles. They have to gather the tiles in numerical order and after 10 tiles, a new team member must run the course and take over tile-gathering; after all 30 tiles have been collected, they must unscramble the letters to put together the phrase: Reinventing How This Game Is Played. A schoolyard pick results in the following teams: Blue Team: Brad, Sarah, Zeke, Aubry, and Andrea; Orange Team: Troyzan, Cirie, Sierra, Michaela, and Tai. Survivors ready? GO! 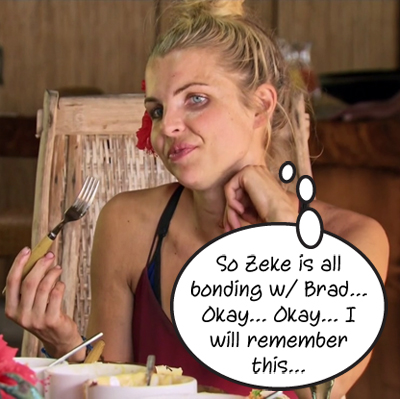 Michaela and Brad are first up to gather tiles and Michaela reaches the chair first, but the Blue team catches up and Brad is first to finish. Troyzan and Andrea are nest to take the seats and Orange is beginning to fall behind while the Blue team is working very quickly. asics uomo Andrea finishes first, but can’t carry all the tiles at once; Troyzan can so we’re tied again. Sarah and Sierra are the last to gather tiles and Sarah is done first, buuut, it doesn’t matter because this puzzle is difficult. After 15 minutes, they are still working on figuring out the phrase. Then we are shown that 50 minutes have passed since the challenge began so Jeff starts dropping some subtle hints to hopefully turn on a lightbulb… Probably because the crew is getting anxious to have their lunch break and want to get this challenge over with already. And a light is what Jeff sparks because Andrea suggests the word “reinventing” and it’s all over. Blue team wins Reward. So! Zeke comments that Rewards are sooo important this far in the game because it gets harder and harder and you need the boost you get from Rewards then we see that he is bonding pretty hardcore with Brad and it does not go unnoticed. Andrea is NOT happy and thinks that Zeke should know better than to buddy-up to the odd man out during a Reward. And she’s still unhappy that he betrayed her earlier in the game… 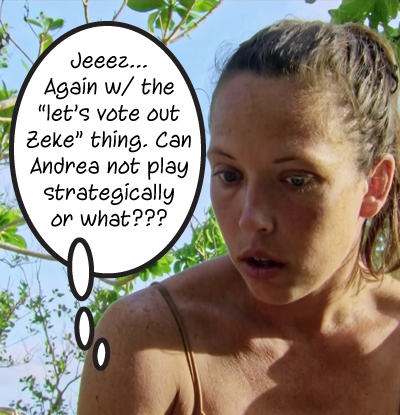 Back at camp, the next day, Sierra is hoping to find a nice spot to slip into; it’s very humbling being on the bottom with Brad, Troyzan, and Tai. Speaking of Troyzan and Tai, they agree to let each other know if either of their names come up in conversation. Troyzan mentions that there could be another Idol, but Tai isn’t sure that there is another one.

LOL! Funny that the two guys with Idols are buddying up, eh? This is the first time that Tai has really felt on the bottom of all the seasons he’s played; if his name comes up – he’s playing one of his Idols. When the others return from Reward, Aubry feels really lucky, buuut, she’s concerned about Brad and Zeke too. Cut to Andrea and Cirie talking; Andrea doesn’t want to be the person throwing out names, but she wants to put the target on Zeke. Cirie agrees that Zeke is the smartest person out there, he’s way more threatening than Sierra, and she thinks they should feel out Sarah. Cirie knows that Sarah is very touchy about Zeke, but she has a chat with her on the beach about it anyway. Of course, Sarah is not down with voting out Zeke and in order to gain some trust with Cirie, she lets her know that she can steal a vote so she’s not worried about Zeke right now – she has back up. nike air max 90 femme pas cher They should go after Sierra now while they have the majority numbers because they can take out Zeke later. Again, Sarah finds herself in the middle, which makes her very happy, and she’s just gonna let things play out and go with whatever group can get her further in the game. 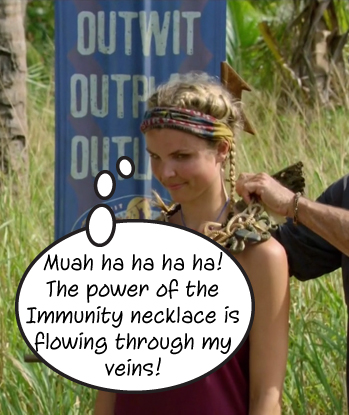 The next day, Zeke is nervous because it’s eerily calm at camp and he can’t get a read on where the line has been drawn. He hasn’t been able to play like he wants to play, but he feels like he can now. At the well, he talks to Sarah about loose plans. For now, they are staying with the girls; Sarah doesn’t trust them, but she DOES trust Zeke. And Zeke wants to work with Sarah too. He asks her if it’s okay if he proposes a final five deal with Troyzan and Brad and Michaela – at least tell them all, even if they don’t stick with it. She’s cool with that. Zeke knows he needs options; he doesn’t trust Andrea or Aubry because they are pretty close. New Balance 990 damskie After this conversation, he seeks out Brad and Troyzan and proposes the final five deal and they are cool with it. HE lets them know he can’t let them in on the next vote, but after this one – they are gonna start doing some damage. Brad will be bothered if he has to vote for Tai or Sierra, but he’s here to win. Come on in, guys! It’s time for Immunity and it’s the “stack the blocks like dominos” challenge. Nike Air Max 90 Fleur Homme Survivors ready? GO! So! The ladies minus Aubry take the early lead and Brad is first to knock down his blocks. Very quickly, Sierra, Michaela, and Andrea are all about in the same place, but Andrea is getting really close, buuut, after she places her last block, she’s too far away from the end of the beam and has to reposition all her blocks. Michaela, Sarah, and Sierra are very close to catching up while she repositions, buuut, Andrea works quickly and wins Immunity. 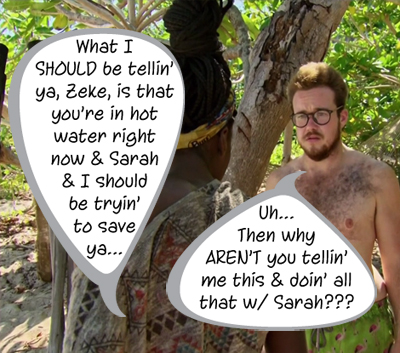 Back at camp, Andrea has decided to play the game on a personal level because she wants to target Zeke; he won’t see it coming because he betrayed her – or some such reason that Andrea gives us. Walking to the well with Cirie, Andrea divulges her big plan to send Zeke over to Jeff at Tribal and Cirie agrees that eventually Zeke will turn on them, but they have to convince Sarah. Air Jordan 1 When they arrive at the well, Cirie has an idea – she’s pretty sure Sierra would vote with them. Air Jordan 6 Retro And wouldn’t ya know… Sierra appears on the scene. She will do whatever the girls tell her to do, she’ll mark her vote to let them know it’s her – whatever they want, as long as it’s not Sierra’s name that’s getting written down. Even if it’s someone in her initial alliance, Sierra will do what it takes to keep playing. Matthew Stafford Jerseys Sierra exits, Cirie and Andrea discuss that they now need to talk to Sarah and DING! Here’s Sarah. Andrea says that Zeke will come after Andrea so they need to vote him out now. She tells the girls she’s okay with voting Zeke as long as the remaining five stay very solid. Oh yeah, oh yeah, they say. Sarah is NOT cool with this plan, though… Later, Andrea rallys Aubry and Michaela. Aubry thinks voting Zeke is great because you gotta strike or be struck. Michaela agrees to vote with the girls as long as she can be confident with them, buuut… Michaela agrees with me – It’s stupid to vote out Zeke now because they have the numbers six to four. Why narrow the gap by kicking out Zeke and making the numbers five to four? It doesn’t make any sense. Those four people only need ONE person to flip if they vote out Zeke now. Even later, Michaela and Sarah talk about it – neither one of them want to vote out Zeke, but Sarah knows not to press the issues because she needs these people to trust her. She also knows that who goes home tonight will come down to how she and Michaela vote… 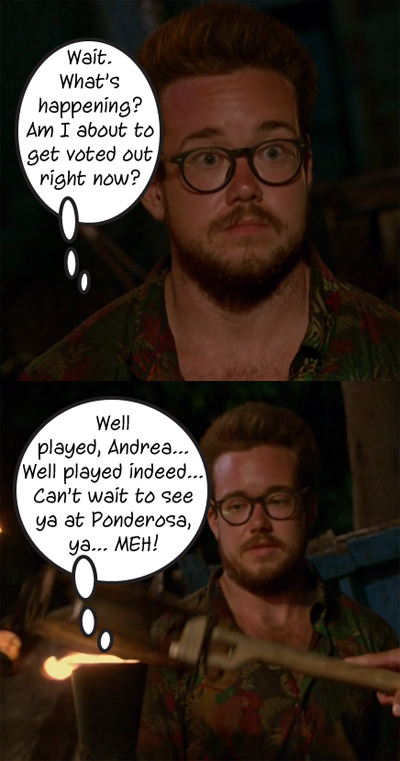 And awaaay we go to Tribal Council! Jeff asks Sarah what happened when they got back to camp after the blindside of Debbie and she tells him that she admitted to be the person who flipped. ray ban pas cher Brad is asked how he feels now and he says he knows himself and the rest of his alliance definitely feel vunerable now. Tai agrees; he’s never felt so uncomfortable in this game. Sierra says she just hopes things work out for the best for her. Zeke says this “cat and mouse” game that the six are playing with the four is just like last week only flipped and that if you have a group of six that want to stick together, they should just do that. Andrea is asked if this is like any other season she’s seen or been a part of and she says it’s not – it used to be that you’d have a majority alliance and you pick people off, but now it’s all loosey-goosey and you just never know. She hopes this six will stick together, though. Michaela is asked how she thinks the vote will go and she thinks that the six will stick together to keep solid numbers and make the simple move to progress everyone forward in the game. Jeff then asks Zeke if he agrees that six to four isn’t a wide enough gap between the majority and minority alliance and he does. air jordan 5 oreo damskie Now is not the time to make a move. Cirie says that you’re always running the numbers, constantly, even while Jeff is asking them questions. Seirra is asks what you do if you’re in her spot and she says you do whatever you have to do. And blah blah blah let’s get to the vote because I don’t like the outcome and I wanna get this over with already. So basically, it’s like Andrea was Head of Household this week by winning Immunity because she forced her own agenda onto Michaela and Sarah. They didn’t wanna vote for Zeke, but they didn’t wanna upset the Princess either sooo… The votes: Tai, Sierra, Tai, Sierra, Tai, Zeke, Zeke, Zeke, Zeke, and Zeke. And Michaela is so upset that she’s crying. Next time on Survivor… Sierra tells Sarah about her Legacy Advantage aaand it looks like the alliances are all scrambled up… Whatever! I’m mad that Zeke is gone… Cheers to Cirie and Aubry taking this thing all the way! As usual, if you like my blogs, check out more stuff here at Your Reality Recaps.