?he ladies have all finally arrived in Amsterdam and check into their hotel. Lisa Rinna greets Eileen and Lisa in the lobby with excitement. She begins to tell them of their flight fight with Kim. Lisa says Kim got so angry and started yelling at her over her sobriety and said she was going to back off. Eileen doesn’t quite understand tho why everyone is scared of Kim Richards. Lisa then warns Eileen that she is coming after you too.

Everyone later meets in the lobby for dinner after settling their belongings in their rooms. At the restaurant Lisa Rinna asks about this whole prostitution thing that is legal in Holland. They joke about it a little and Yolanda says if she were single she would do whatever she had to feed her kids including that! Yolanda says she wo 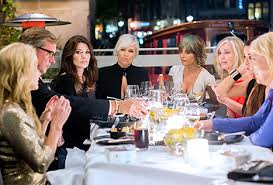 uld like all the ladies to share something to help them all get closer. She shares with all the ladies now of Bella’s DUI (Poor girl her mom just can’t stop talking about it). Lisa Rinna shares that she lost her sister at 21 when she was 6 to drug and alcohol abuse. She then follows it up with an sorrKim if she butted into her business that it was coming from a caring place. Kim immediately fired back but you did but in my business! Says she’s bin sober and doesn’t like that Lisa and Eileen keep bringing it up. Lisa says been I have seen odd behavior that gives me warrant to question it a little. Kim said everyone here who is my friend would have to come to me over last 3 years and told me if I was slipping. Again says was the pill that she took of Monty’s that she had a bad reaction to and put her in the hospital for a week after poker night. Kim starts to point fingers at Kim and Eileen which pisses Eileen off. Kim doesn’t like them asking so many questions about her sobriety. Kim fires at Lisa “Lets talk about your personal life at home” causing Eileen to step i 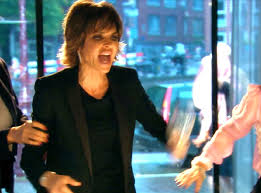 n telling Kim your being nasty. Kim then turns on Eileen saying “I don’t like you”. Eileen tells her she has been struggling to find anything to like about Kim. Kim goes off saying I hate your face…your hair…your aditude. All this is going on and Brandi is quiet and actually for once not in the middle. Kyle tries to stop Kim asking “Whats wrong with you” (probably not the best thing to say at the moment Kyle)! Kim turns to her with anger saying “Kathy would have my back…Kathy wouldn’t be treating me like this!”. Again says Brandi has been there more lately then Kyle has. Lisa tells Kim it’s not right to speak to your sister like that. Yolanda jumps in saying she understands where they are both (Kim and Lisa) are coming from. She then starts to say “Kim you have been sober for 3 years and Lisa husband has..” causing Kim to say “Lets talk about the Husband”. Pissing Lisa off she says don’t talk about my husband. Kim tells her “Don’t talk about what you don’t want out”. Lisa Rinna then reaches for Kim’s neck but pulls back and throws her wine at her before smashing the glass on the table! Kyle runs out of the restaurant and the other ladies all leave.

The ladies are now in two groups talking. Yolanda asks kim what the hack happened. Kim says ive told her numerous times to not bring it up. Brandi says “she is at a loss of words”. Kim tells them she is tired of them bringing it up.  Yolanda tells Kim you should talk about the kids or husbands. Kim feels tho questioning her sobriety is going after her kids since her drinking caused issues for her kids.The Lisa’s , Eileen and Kyle talk in Kyle’s room. Lisa tells them maybe she should head home early. Kyle says no nobody is leaving early cause of her.

Next morning Kim goes to Lisa Rinna room to talk about the night before cause it really upset her. Says she wishes she would have come to her 1 on 1 and not in a  group and that questioning her is hurting her kids to and that’s why she gets so defensive. Lisa tells Kim that her talking about her Husband made her get defensive to and they easily come to an understanding. Lisa tells her that she is now backed off after that dinner fight and that is overall she was coming from a good place.

Ladies all gather in the lobby for a relaxing bike ride. Yolanda wants to show the group her town and countryside Windmills. Girls are all enjoying themselves and getting along. At the windmills they meet this guy who claims to have dated Yolanda. Yolanda laughs and says must be her Lyme disease cause she doesn’t remember him! Lisa V jokes saying “Yolanda this could have all been yours” and tries to get them to kiss for old times sake.  They then head over to Yolanda’s mom’s house (Ans). Her brother Leo and friend Giena are over 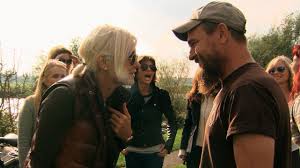 as well. They hangout a little bit and chat going over the evening plans. They are going to a bar place where you can order pot related things. Yolanda surprisingly has never done drugs even tho it is legal there. Kim asks what else there is to do if you don’t do those things..her mom says “Stay home”.

Ladies meet up again and head out to the place minus Kim. Kyle was surprised at first of Kim not going till DUH they tell her she can’t be around it. They start to debate on what to get and who is even going to have some. Brandi is annoyed by the ladies all acting like they have never done it before. Brandi tells them she isn’t going to have any cause she wants to be on her best behavior but Kyle not doing it causes her to say “That last time she smoked it was with Kyle”. Which of course annoyed Kyle. They end up getting a cake with the Lisa’s, Eileen & Yolanda have a piece. Lisa Rinna said her kids know she never says NO to cake!! Walking back to their hotel a little argument comes up between Kyle and Brandi. Lisa V tells Brandi there are some things you just don’t say. Which in turn makes Brandi frustrated cause of the double standards. It’s okay to shame Brandi for things but if she says something that is truthful its a problem. Kyle tries to tell her of her issue with her statement and Brandi starts to scream and storm away. Clearly Brandi is very over being stuck with these women. They don’t agree so walk back separate from each ot  her.

Who do you think handled the situation better at dinner…Kim or Lisa Rinna? How will Amsterdam go moving forward? Make sure to check out Jon’s audio blogs for RHOBH, RHOA and Vanderpump Rules and Dana is blogging RHOA and Vanderpump rules. You can find ALL our Bravo coverage at yourrealityrecaps.com/bravo