They leave their vegan spa retreat and head on to Manila to experience some of the Philippine’s culture. Lets say I want to travel like these ladies who are given a presidential suite to congregate into complete with private butler and then they all get their owns room. I’m so jealous. No one wanted to leave The Farm especially Kenya, but they are all still laughing and getting along. They all leave hopeful that Kenya and Phaedra are will on the road to peace and maybe friendship. 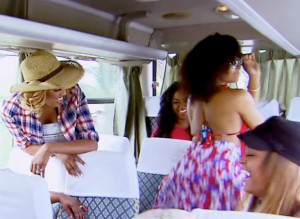 First on the agenda is a trip to see a volcano. The ladies all pile on the bus which is always the breeding ground for some great conflict. Women + confined space = WAR! But the ladies surprise me yet again. Without NeNe around to instigate conflict everyone is in a much more accepting head space. They laugh and joke around and just be girls. They have to ride a horse up the volcano and Cynthia is nervous. Now you could 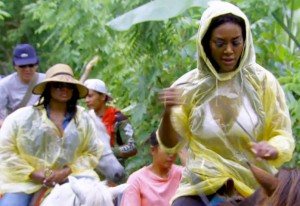 knock me over with a feather watching Phaedra (who weeks earlier walked out on a lunch with her) was comforting and encouraging Cynthia. YES the Philippines is a magical place I tell ya. They get to the top and knock some golf balls out into the crater which is custom and go back down again. At the bottom Phaedra is so moved by her guides story of her husband being killed that she wants to help. The guide is shy and knows little English but through a translator she lets her know that she wants to help her and gives her a wad of money for her and her children. I like THIS Phaedra. Honest, genuine and nice. 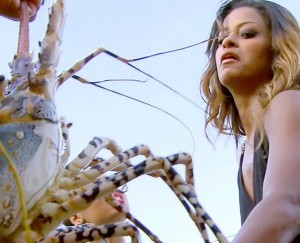 After the ladies are all showered they tour the local market. Where is Tom Ford, Versace, Chanel, Minolo Blanik? asks Porshe. Not here honey. Today you try the local cuisine which consists of smelly fruit and a stinky fish. Again the girls are laughing and having fun despite not wanting to touch or eat anything. I keep waiting for some crazy argument to erupt and a weave to be pulled out of someones head. Doesn’t happen here. We are still waiting for Kenya and Phaedra to have their sit down though.

Claudia decides it would be fun to have a slumber party in the suite, all the girls show up except for Kenya and Phaedra. While the girls sit and talk about 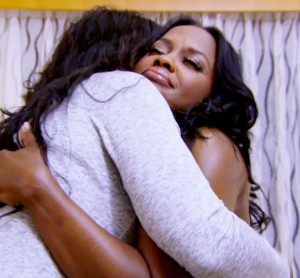 girly things and play never have a I ever the other two are in Phaedra’s room having a heart to heart. Kenya starts it by admitting she has a tendency to over talk, she’s working on it and wants to just listen to what she has to say. Phaedra tells her she was hurt and angry, they were working on a friendship when all this went down. She can’t change the past but she wants to move forward. Kenya agrees but adds that Phaedra’s behaviour didn’t reflect that. She was called a whore every which way, she felt disrespected and that she wasn’t even being treated like a human being. Kenya believe that Phaedra was trying to destroy her. While Phaedra didn’t deny any of it she said she had to have her husband’s side, back then, but now she’s in a different place. Phaedra tells her the slate is clean, the past is the past and nothing can change it but her heart and mind are open to building this relationship. The ladies are crying and it was really a touching moment. I didn’t feel, like every other time, it was for the cameras. I think these ladies finally reached each others hearts and are legitimately going to try. They end up joining the slumber party already in progress and everyone has a nice time. They do try to pry into what was said between the two girls, and Phaedra shut it down. They’ll find out  when they watch the show! 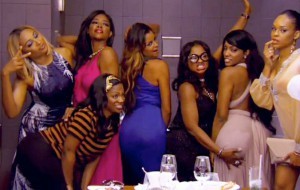 It’s the last day in the Philippines, and Claudia is feeling the effects of the night before. The ladies partied a little hard. She gathers the ladies for one last lunch before they head home.  They all think back on the trip and what a great time it was. Why was it a great time? No NeNe. After some laughs the ladies take one last group photo together and it’s back to Atlanta! Next week is the finale and NeNe is back with the group. Will she erase the progress that Phaedra and Kenya made? Will all the ladies who seem to have made peace with each other keep it that way? It’s been a season of fighting so we’ll just have to find out next week.

Don’t forget to check out our BRAVO page for all our recaps on all the Bravo shows plus Jon is reading you the ladies blogs and giving you his take on the weeks events. ALSO we are covering HELLS KITCHEN, Survivor, Amazing Race, RuPaul’s Drag Race and so check out their pages to keep up on what’s happening. Head over to AMAZON.COM to do all your online shopping. You’ll get all the same great prices and it will also help us to continue to bring you coverage of all your favorite reality shows.