We are now dealing with the aftermath of Kandi’s sex party. Kenya and Cynthia are discussing NeNe’s behaviour and they finally come to the realization that she likes to be mean just for the sake of it. NeNe wants the reaction after she snubs you, there is no denying that. Meanwhile NeNe and Phaedra meet Demetria at her recording studio and NeNe wastes no time bringing up the Roger Bob cheating bomb dropped at Kandi’s party. Demetria says she did talk to him about it and defends him by saying it happened while they were on “a break” so she is going to move past it. Both NeNe and Phaedra think that is stupid but they move on. Phaedra doesn’t beat around the bush in asking why Demetria waited til she was 35 to start singing if that was what she always wanted to do. Phaedra is reading Demetria like a book. Why aren’t you married, what are you waiting for, make him chase you. She can’t believe Demeteria would DATE someone for 8 years.

All the ladies are off to Puerto Rico for a vacation. Kandi, Porshe and Demetria show up first. Demetria will be performing on the trip. Claudia, Kenya and Cynthia arrive together. Demetria is taking the time without Phaedra to get a read on how she operates with other girls. Kenya doesn’t want what happened to her to happen to Demetria so she gives her some sage advice. If what Phaedra is saying bothers you, you HAVE to say something! Demetria takes that advice and meanwhile the storm of NeNe and Phaedra have no arrived in Puerto Rico. The ladies spend the ride to the hotel throwing shade at Demetria. Phaedra insults Demetria’s stylist and NeNe is going to make do with her small room. 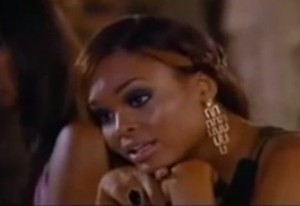 Night one the ladies meet up for dinner. All anyone can do is complain about I’m not facing the water, it’s a little cloudy instead of thanking Demetria for the trip. Demetria decided before things get even more shady she’s going to call Phaedra on her shade. She didn’t want opinions on her relationship and managed to quiet Phaedra down for a minute when she said that the only thing they have in common is the number 8. Her man’s been their for 8 while Phaedra’s has been leaving for 8. After a moment Phaedra finds a response while the other ladies are trying to have conversation. Claudia says she needs more wine, Kenya offers her wine to 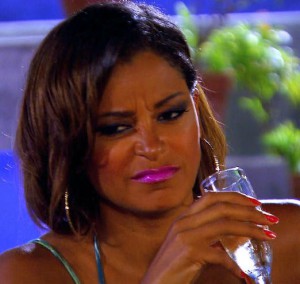 her and NeNe finds this the perfect opportunity to offer up some shade of her own saying you don’t know where Kenya’s lips have been. Oh Lord this dinner is going downhill FAST. The argument turns back to Demetria and Phaedra with Phaedra telling her she should be a folk singer. Phaedra and NeNe are being such bitches to everyone in the room. If I were Demetria I’d be taking back my room key and sending the stateside! For two women who were offered a free vacation they are THE MOST ungrateful women I have ever seen and the rest of the RHOA cast agree with me. Claudia finally breaks it down and tells them to stop being such catty bitches and discuss the issues like grown ups. Well NeNe doesn’t like being told anything. NeNe has now turned her shade to Claudia. The difference with Claudia is that she gives it back. She’s not letting NeNe steamroll her. NeNe has left and NaNa has arrived. The topics fly from NeNe being a stripper, to Claudia wanting NeNe’s money, to NeNe being in jail and the episode ends with NeNe calling Claudia a whore using one of the nastiest comments I’ve ever heard stunning the group of ladies.

Next weeks episode will pick this fight up where it left off. Who is going to win the reading contest, NeNe or Claudia? Will this trip to Puerto Rico be a total bust? Comment below and let me know what you think of the antics of the ladies? Don’t forget to check out our BRAVO PAGE where you’ll find written recaps of all the current Bravo content AND Jon is reading you the ladies Bravo blogs so you’ll get to know what the ladies were really thinking during all this chaos!