The ladies have agreed to go on this group bonding trip to The Philippines planned by Claudia and Porshe. Even Phaedra despite having reservations is going. Only NeNe is staying behind telling them it’s because she has blood clotting issues and work commitments. After a quick stop in Korea they ladies finally make it to the Philipines and nobody has fought. Claudia gave Phaedra the best room at the resort because she’s had such a hard time with Apollo and she’s very appreciative of her efforts. Everyone agrees that the energy of this trip is different without NeNe. Do the girls stand a chance at having a good time here? 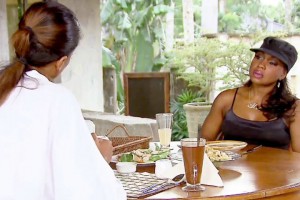 After a quick rest Claudia and Pheadra meet for lunch. These two ladies haven’t interacted much this season because of Phaedra’s issues and her friendship with NeNe has put up a wall between her and Claudia. These two begin to talk and Claudia tells Phaedra she wants her to relax, she isn’t starting anything with her. Claudia then opens up about her divorce, letting Phaedra know that she can relate to what she is going through. Her ex wasn’t exactly faithful and she felt pressure from his family to stay with him. She asks her what was the breaking point with her and Apollo. Phaedra doesn’t want to talk about her marriage, but she does open up to Claudia about her feeling about how this affects her boys. Those two cuties are always Phaedra’s main focus. Claudia also asks if she is ok with Kandi, and Phaedra tells her they are cool. I’m so happy to see conversation happen where it doesn’t end in a screaming match. 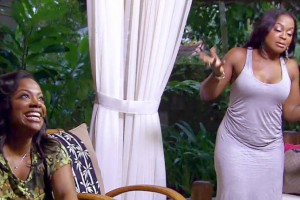 Kandi has scheduled a massage for her and Phaedra after learning in the Dr Jeff session that they still have issues. Phaedra tells her there are no issues people would just ask if they talked and she’d say no. Things in the group get so lost in translation. They talk through it, which is never an issue with Kandi, she’ll always have a discussion with you. The both agree that they need to engage each other more and communicate better. With their lives both being so busy they got lost in their own problems. Phaedra says that her relationship with Kandi is strong enough to weather this little bump in the road. I’m liking this new calmer, more rational Phaedra. NeNe detox has done wonders for her! Kandi does want her to try to work on her relationship with Kenya. If her and NeNe could put aside their difference, Kenya should be no problem. They both end their massage session laughing with each other. It’s nice to see a genuine smile on Phaedra’s face. Before dinner girls all meet for a yoga session. They all have a good time, Kandi wasn’t really feeling it and even fell asleep during the class. I’m with you Kandi. I just don’t bend that way! 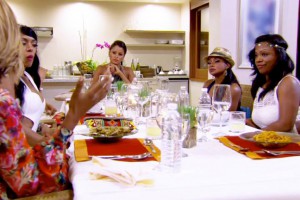 Can all this love last through dinner. I have hope. Even Porshe and Cynthia are getting along. Dinner begins and Claudia has assigned seats. She is trying to make people mix that would normally avoid each other. Cynthia starts the dinner off by apologizing to Phaedra for bringing up the “Chocolate” business. It was out of line and she realizes that now. The two are having a discussion and of course Porshe chimes in. Claudia nicely tries to tell her to let the ladies work it out but now Porshe feels like she has been “checked”, she is grown and won’t be hushed at the dinner table. Kenya quietly says that Porshe is just trying to have a moment when hell breaks loose. Claudia is desperately trying to reign in the chao and starts hitting a glass with a knife to 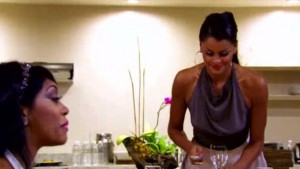 get the attention back to her. She hits the glass so hard she shatters it which stops the fighting enough for Claudia to get things back on track. Kenya wants to talk to Phaedra, but she wants nothing to do with her. After being begged to listen. They both spread vicious things around about each other. Phaedra says she’s sorry but in her heart she believes something happened with Apollo even though he said it was a lie. Kenya wants to move forward and asks Phaedra to meet with her privately so they can discuss this matter more. There is no need for an audience and EVERYONE at the table has an AMEN to that. Phaedra actually agrees to sit with Kenya and have a conversation. I have so much hope now that NeNe is no longer whispering in her ear that something good, be it a friendship or an agreement to just tolerate each other can come from this. By the end of the dinner the ladies are laughing and comparing asses. THIS is what a trip away should be. Good fun with friends, laughing and joking. I haven’t enjoyed an episode of RHOA this much in a long time.

Is NeNe’s absence the thing all the girls needed? Truth be told, we at YRR think NeNe’s time as a housewife is coming to an end. Find out why here.  Don’t forget to check out our BRAVO page for all our recaps on all the Bravo shows plus Jon is reading you the ladies blogs and giving you his take on the weeks events. ALSO we are covering HELLS KITCHEN, Survivor, Amazing Race, RuPaul’s Drag Race and KING OF THE NERDS so check out their pages to keep up on what’s happening. Head over to AMAZON.COM to do all your online shopping. You’ll get all the same great prices and it will also help us to continue to bring you coverage of all your favorite reality shows.