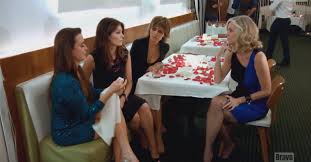 Well we continue where we left of last week with Kyle’s gay mixer. We have Kyle in Kim’s face screaming “Your gonna let this person come between us” meaning Brandi. Then follows it up with a “Fuck You” before finally walking away. Brandi and Mark come to console her before finally leaving the party, while Kim is still confused on why Kyle was acting the way she was. Brandi says Kim asked for her help which Kyle doesn’t understand but wants to be there for Kim best she can. Kim says she is so upset cause she felt like Kyle was trying to get Brandi to say stuff Kim had privately told her. Kyle is screaming that Brandi is a mean girl and Lisa tries to calm her down telling her Brandi is only looking for attention. Kyle also doesn’t understand why Kim was blaming her. Lisa Rinna chimes in asking “why is Brandi get so angry” and feels bad seeing two sisters fight so much. Eileen completely understands sisters fighting since she has four sisters herself. Lisa Rinna thinks Kim is an addict and everyone is scared to talk about it.

Lisa and Pandora are setting up a display for her wine from her restaurant. Lisa tells her of Max’s wanting to know his heritage. Pandora doesn’t exactly receive the news well and gets upset saying “he’s ours”. We see adorable pictures of when Ken and Lisa picked up Max. Max comes over to Lisa’s house to have her look at his results with him. Finds out he is part Irish and Scandinavian. Lisa asks how he would feel if he met his birth mother tomorrow and he tells her he doesn’t want to meet them. Asks if she was worried and she admits she has since the day she picked him up.

Brandi heads over to Yolanda’s house for some yoga relaxation. The ladies begin to discuss the gay mixer party and Yolanda tells Brandi she was upset at the stories she was hearing. Brandi clears the air with her saying she wasn’t the drunk one but Kyle was. Yolanda says she doesn’t want people calling Brandi an alcoholic to which she follows up with “but if you are I am here to help you”. Brandi snaps back that she isn’t and that how does she feel when people call Bella an alcoholic? Yolanda takes offence to the statement saying she is only trying to help her and to not snap at her like that. The ladies finally get over the tiff when Brandi apologizes saying she didn’t mean it that way.

Eileen sets up a lunch date with the Richards sisters hoping to try and help their situation. The girls all sit down and Eileen asks if everything is ok and Kim says “yes that is my sister no matter what we are sisters”. She shares with the girls that she has had two of her sisters pass away one being 5 years ago and the other 4 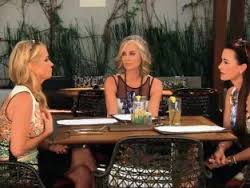 months ago to cancer. The sisters pretty quickly begin to fight again. Kim is still clearly holding onto past issues as well as Kyle. Kyle is worried that Kim has shared too much personal info with Brandi that could possibly blow up in their faces. Kim finally tells her sister she is so hurt and disappointed because of Kyle’s constantly dragging her into all the fights with Brandi. And that last party pushed her over the edge after Kyle asked Brandi to repeat what Kim has told her. Kyle fires back that Kim doesn’t even bother to try to stick up for her to Brandi. Eileen thinks she has now opened a Pandora Box with these sisters. She tells them this will go on forever until someone drops the sword.

Lisa Rinna and Brandi meet for lunch after doing Brandi podcast show. Brandi talks how she was nervous to do it since they are on the show together. Lisa tells Brandi the girls don’t understand why she is so mean. Brandi informs Lisa she is tempered, a mama bear to her close friends and she hits back twice as hard when she is hit. Says it is hard for her since Kim has told her she is her best friend since Kim doesn’t have many girlfriends. Lisa is clearly worried something is going to happen and why is everyone so scared to talk about it. Brandi is worried cause he thinks she is not the best person for Kim cause she is not sober. She can’t change who she is to help her. Lisa ask if she has seen her do anything to which Brandi says she has never seen her smoke, pills or drink. Kyle asks why don’t you go to Kyle. (did she not see how well Kyle responded to Brandi) Brandi says no but that maybe Lisa should try since Kyle doesn’t listen to her.

Did Eileen’s effort to fix things make it better or worse for the Richards sisters? Will Lisa talk to Kyle about Kim? Be sure to check out Jon’s audio blogs for RHOBH, RHOA and Vanderpump Rules and Dana is blogging RHOA and Vanderpump rules. You can find ALL our Bravo coverage at yourrealityrecaps.com/bravo