Now that Sarah is in power the Diaper Alliance is now pooping in their well diapers! Zach and Ashleigh as predicted are on the block. Their only chance is to try to control the veto. The numbers are even right now so it’s a 50/50 chance that the Diaper Alliance will win it. The best case scenario is Pilar (stop laughing it could happen) winning the Veto. That forces Sarah’s hand into nominating Godfrey giving the Diapers 2/3 votes.  Zach’s plan if that doesn’t happen is for the girls to convince Sarah that they 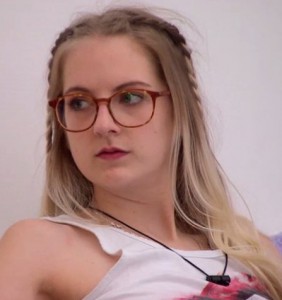 are totally down for an all girl final four (which hasn’t happened since Season 6 of BBUS) Zach tells Pilar the plan and the two then separately need to go to Sarah. Pilar is up first! She goes in and she can’t even remember who the hell they want evicted. First she tells her they NEED Zach evicted, then she forgets and says Godfrey. Sarah is LOVING every minute of this. She knows it’s a crock of crap but it really is funny to watch Pilar after 2 months try to talk some game with Sarah. Really they should have role played with Pilar a bit before sending her to Sarah. It’s like sending a guppy in to swim with a shark. 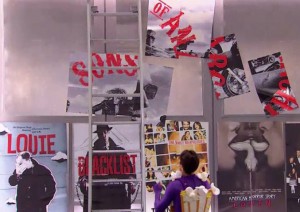 We are at the final 6 so everyone is playing this Veto. In Shomi the Veto they are shown clips of different Shomi shows and clues to the puzzle they need to solve. Once they are done they need to go over to their giant board and recreate  what they were just shown which was 4 posters for shows and a giant Sons of Anarchy poster. The one to do it in the fastest 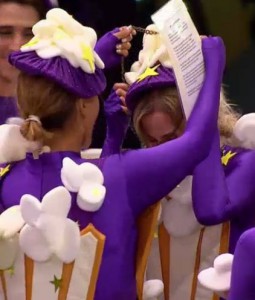 time wins not only the Veto put a 5000 entertainment package! The bottom row of shows everyone gets to problems, it’s the larger SOA poster that stumps everyone, only Ashleigh gets it right her first try. Zach and Godfrey spend way to much time on the upper puzzle to win. Then there is Pilar! Who cast this girl? First she quit the swing challenge which if it made you sick I can totally understand but then she quits this one too. She got frustrated and just couldn’t do it anymore. If I were in her alliance I’d go to Sarah and tell her to put her up! You alliances back is against the wall, you are their best case scenario to ensure you get to the next week in tact and you freaking quit! I can’t with this girl anymore. Brittnee reveals the winner of the Veto with a time of 28 minutes it was Ashleigh. 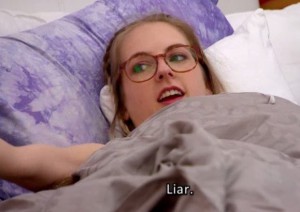 With Ashleigh holding the Veto she Finally goes to Sarah about the all girl final four. We need this all girl final four, it’s the best thing for my game, no one can win against Zach. The words are all their too bad the girl is basically hiding behind a door and can’t even look at Sarah. Where was this pitch days ago Sarah wonders. Why now that you have the veto hanging around your neck are you pitching this idea? Oh right so your other best friend doesn’t go on the block. Again, Sarah sees right through it. All these two amateurs did was cement in Sarah’s head what needs to happen! These two girls are playing FOR Zach, not with him, for him and she can’t work with them unless he’s gone. 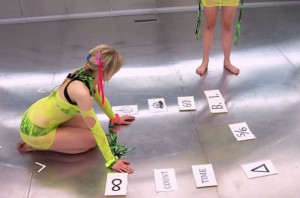 Godfrey is called into the Diary Room where he finds a Big Brother card so you know what that means! Mission time. His mission is to make the house guests get as paranoid as he can using all the random clues that Big Brother is leaving around the house BUT first it’s rap time complete with man thong and fish net dress costumes. Godfrey in his neon man thong brings me great joy. That boy has a killer body! First they create this rap song which was pretty bad then Big Brother starts having fun. First the leave cards with numbers in the back yard. Then you hear  “you guys look sick” To me it sounded like Arlie but they think it was 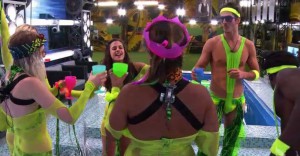 Bruno. Now they think these numbers have something to do with Bruno. Then they are sent to the vault where they find more weird symbols and words. You guys look sick continues to be played randomly fueling the hysteria. Godfrey couldn’t have had an easier task. Once the picture of Bruno’s kids comes into play it’s craziness. They are all bound and determined to solve this puzzle while Godfrey sits back munching on pizza. Finally Godfrey is allowed to break it to them he has successfully completed a mission. For the torture they are rewards with a dance party complete with alcohol. It’s been a while and these guys dig in, still in their fish net and man thongs! 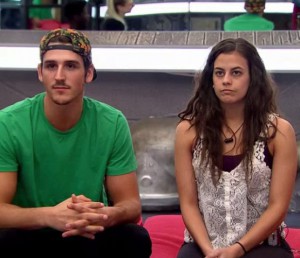 Sarah tells Pili she’s going on the block. She is trying to force Ashleigh to take a side. It’s also testing Pili’s trust in Ashleigh. If she has 100% trust in her she knows that she’ll be safe. At the POV ceremony Zach tells Ashleigh not to use it on him BUT  tells Sarah to think long and hard who she puts next to him because if he stays he’s coming after her and Brittnee. Zach trying to be threatening is laughable and even Sarah thinks ya sure Zach bring it on. Tough words from a guy who had his closest ally evicted on his HOH. Let him have another HOH he’d probably get Ashleigh evicted.  As expected Ashleigh uses the veto on her and Pilar is named as the replacement.

Everything now rests on Godfrey. Will Zach be able to sway him into keeping him? Don’t forget to vote for the BBCAN3 Awards before it’s too late! Jon and I are live recapping this weeks Double eviction this Friday AT 3pm You aren’t going to want to miss this show! Before then though you need to check out the amazing exit interviews with all the evicted and our shows with Graig and Johnny  and Naeha below. As always  all our recaps are on our BBCAN page.  We also have exit interviews every Thursday so tweet us your questions #YRRLive right after the episode so we can ask them what you want to know.