After the nomination ceremony, Tyler says that things are looking up for him since he got a Power App, and 2 perfect pawns are sitting on the block. It’s imperative that Kaitlyn’s alliance not find out about her true plans. 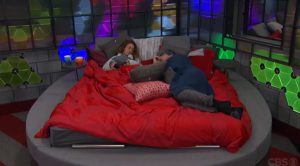 All hopes for the week depend on Swaggy not getting drawn for the POV. Kaitlyn, Scottie, Winston, Fessie, Rachel and Tyler are picked, so the plan is on. After the draw, Kaitlyn tells Fessie that he shouldn’t win, or he’ll create a target on his back. Fessie is clearly a recruit. He doesn’t understand that racking up a bunch of wins early is bad for his game. He says that he’ll win the veto this week, and if he is nominated next week, he’ll win that one, too. See…he doesn’t understand backdoors yet. He says in DR that he’s always in competition mode, so he’s not throwing any comps.

Kaitlyn is having a hard time keeping the truth from the Foutte alliance. She hates lying to Fessie in particular. We get it; you have a massive hard on for him. Everyone is on board with Winston being on the block, but several members of Foutte are questioning Scottie’s nomination. She states that the alliance must not find out her plan, so she is pretending with them until the POV ceremony. 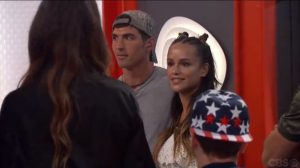 Cody and Jessica are back to host the POV competition and to show off her engagement ring. Jessica says that they fell in love last year in the BB house, but not all houseguests are so lucky. So, BB has created a dating app called HouseguestsOnly.com. She tells them they’ll learn more about it when it’s their turn for the competition. 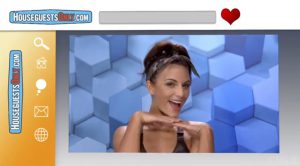 Each houseguest does the comp individually, and must place cardboard cutouts of Jodi, Jozea, Christmas, Meech, Cody, McRae and Boogie in front of places that correspond with their dating profiles’ likes and dislikes. The maximum time allowed is 20 minutes. Rachael does well, scoring a time of 5:49. Scottie scores a time of 18:20. Tyler scores 5:29. Fessie scores 6:22. Winston times out at 20:00. Kaitlyn scores 13:12, so Tyler wins the POV. 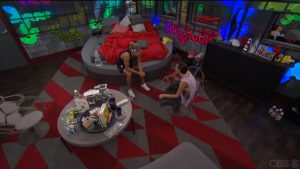 As Tyler is still wearing the veto necklace, Kaitlyn tells him that she is starting to get nervous about backdooring Swaggy. Tyler says in DR that they got the stars to align perfectly for this backdoor, and now Kaitlyn is nervous. He reminds her of all the reasons why she should make the move, and she tells him that she needs him to keep reminding her. She’s straight up codependent. 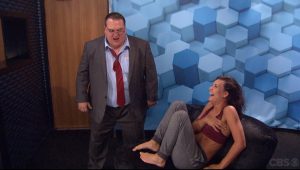 Rachel’s Yell Reviewer comes in and starts berating her, giving her 0 Stars. He throws all the sheets off her bed for the worst bed making he’s ever seen. He even busts in on the whole house and reviews what a terrible sleeper she is. My favorite is when she is talking about him in DR, and he busts in on her to tell her this is the worst DR session ever. 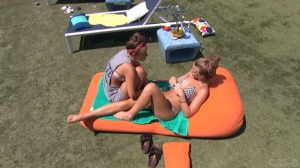 In the backyard, Kaitlyn tells Haleigh that she may not be okay with what she is doing this week. Haleigh says that she’s fine with whatever it is if it’s not her. Haleigh correctly guesses a Swaggy backdoor. After promising to keep this a secret, she tells Rockstar. Rockstar then tells “Finessy” that she has a bad feeling about this week and feels like Tyler has too much influence on Kaitlyn, and she doesn’t trust him. 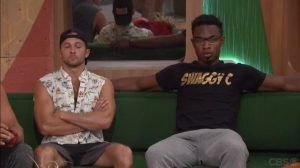 Just before the POV meeting, Kaitlyn pulls Fessie aside and tells him not to be mad at her for what she’s about to do. He is. At the POV meeting, Tyler decides to use the POV on Scottie. Kaitlyn is crying because she knows some people may not be able to forgive her. She names Swaggy as the replacement nominee. Then, she runs upstairs and plays victim, bawling her eyes out like we want all our feminist icons to do when they stand up for themselves.