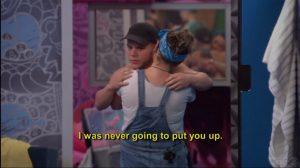 Either Rockstar or Kaitlyn will be evicted, and because of Sam’s Power App, they will also have the CHANCE to return to the game post-eviction. Picking up after the Veto meeting, Kaitlyn is crushed that Fessy didn’t use the POV on her as promised. Sam picks JC up like a rag doll, swearing that she wasn’t seriously going to nominate him. 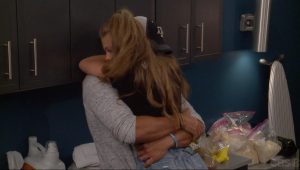 Tyler and Fessie have a brief convo in the storage room about keeping Kaitlyn because Tyler feels that they can control her, so he wants to keep her in the game if he can. Haleigh interrupts them, waits for Tyler to leave and gives Fessie a big hug. She wants to make sure that they are voting together this week, and Fessie says he will vote however she wants. She says she needs to keep Rockstar in the game. Kaitlyn who? 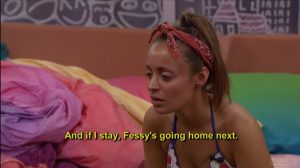 After the POV meeting, Kaitlyn is furious and upset with Fessy. She cries hysterically about how many men have fucked her over and lied to her. (Like how she fucked her boyfriend over?) Tyler talks to Kaitlyn and pumps her up to campaign to stay. She says that Tyler is all she has left in the game. They discuss her staying, winning HOH and then backdooring Fessy. Fessy joins Kaitlyn and is frustrated by the endless emotional rollercoaster with her crying all the time. He thinks she could rally the votes to stay, but she only wants to talk about being a victim of his lies and betrayal. 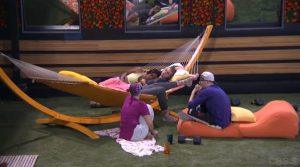 Rockstar joins her alliance by the hammock, and she’s not sure she can trust their votes after 3 weeks of blindside votes. Haleigh says that they must vote as a unit, which includes Haleigh, Bayleigh, Fessy and Scottie, and she only needs to flip 2 votes. Haleigh points out in DR Fessy promised to vote whichever way she wants this week, and Haleigh needs Rockstar to stay. She’s cracking that whip, and they aren’t even having a real showmance. 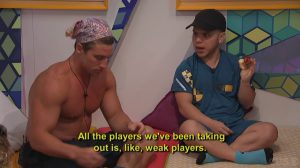 JC is not down to vote with Level 6 this week. He thinks that Kaitlyn is the stronger competitor and needs to be voted out this week. He says that Rockstar isn’t winning anything as Tyler and Brett point out they are her targets. Angela points out that keeping a bigger target in the house like Kaitlyn protects Brett. JC isn’t buying any of it, and he promises to get everyone on board to vote out Kaitlyn. 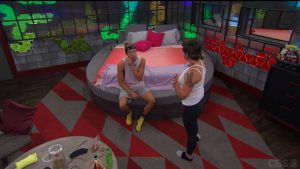 Tyler checks in with Sam to let her know that the votes are up in the air right now, and it might come down to a tie. Sam says that if they can’t make up their minds, she’s putting 2 dots in a cup, only both dots will be Kaitlyn’s color. Sam promises that she damn sure isn’t losing to Kaitlyn. Tyler asks about the possibility of her returning to the game, and Sam says that she’ll just beat her again. She says that she’ll ‘stomp a mudhole in that bitch’s chest.’ I have no idea WTF that means, but Sam sounds like a badass saying it. 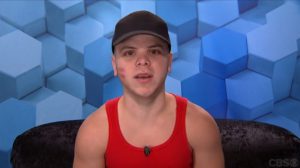 Time for the eviction: Rockstar says how much she loves the houseguests, which even includes Brett. She said he gave her a shout out in his speech, so she’s returning the favor. Kaitlyn thanks a bunch of motivational speakers, and it’s clear from the way the 2 ladies are dressed that Kaitlyn knows she’s headed home. Maybe. After JC spent the whole week campaigning for Kaitlyn to leave, he surprisingly votes out Rockstar, but he’s the only one. Kaitlyn is evicted 9 to 1. 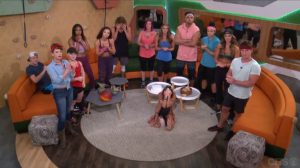 The Bonus Life Power is revealed, and Kaitlyn gets a chance to stay in the game. She falls to her knees. Julie tells her to head up to the BB App Store to compete to stay. 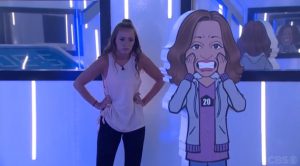 To stay, she must put together a 6-piece puzzle of herself in 2:30. The ridiculous part is that production clearly expected her to complete the task. The funny thing is that had she just put her legs closer together, she would’ve stayed. Pretty much sums up her game. This is a major gut punch to #TeamFunFeeds; we need some crazy in that house. It’s best summed up HERE by Eric. If you haven’t watched this, you’re missing out on a hilarious rant. 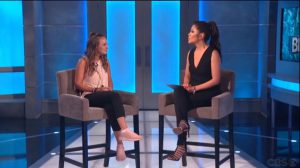 Kaitlyn’s eviction stands, which production didn’t plan on since there wasn’t even enough time for a post eviction interview. Julie takes time to tell her that the one vote against Rockstar was JC, though she guessed it was Tyler or Fessy. Nope—they compared notes earlier in the day; and Tyler learned he wasn’t her only ‘soulmate’ in the house.