After an unexpected hiatus due to illness, I’m back recapping The Amazing Race! The second episode began on the beach in Rio, where Tanner & Josh are the first ones off to Buenos Aires. Once in Buenos Aires, teams must find the church where Pope Francis was baptized. All teams book a flight for 8:25 pm. While waiting at the airport, Alex & Adam borrow someone’s phone to look up the address of the church in Buenos Aires. The green team and team mother/son also look the location up, which Justin says they should keep a secret. Denise & James seem to agree, then they go tell Tanner & Josh and Logan & Chris where the church is. Justin is understandably annoyed, but he approaches James & Denise in front of the other two teams, and it’s pretty awkward. Once teams get to the church, they have to pick a number to choose the order in which they will enter the church when it opens at 7:30 am. Justin & Diana get the first number, which annoys other teams. 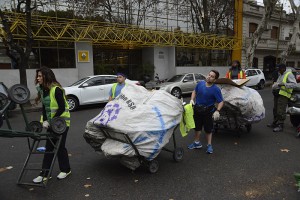 In the morning, teams enter the church one-by-one, where they receive their clue for a detour. In Cartoneros, teams must pick up 100 kilograms of recycling in order to receive their next clue. Fletero requires teams to transport valuable statues across town in a truck, with one team member driving and the other sitting in the back trying to stop the statues from breaking. Kelsey & Joey are the only team to choose Fletero. All of the other teams choose Cartoneros, but there are only 8 carts available, first come first serve. Multiple teams are struggling with the recycling detour, which is a lot harder than it seemed. Josh & Tanner load their cart with recyclables, and it ways 27 pounds, so they go back to collect more. Other teams are having trouble finding any materials, because the teams in the lead scoured most of the nearby recycling containers. Jazmine & Danielle arrive at Cartoneros last, but all the carts are taken, so they decide to go looking for an empty cart. 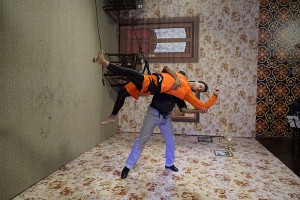 Justin & Diana finish the detour first and receive a clue instructing them to go to Bartolome Mitre. After finishing Cartoneros, Josh & Tanner run into Jazmine & Danielle and tell the girls where their empty cart is. At Bartolome Mitre, Diana & Justin encounter a roadblock. Tilted Tango requires one team member to perform part of a tango routine, then get hooked into a harness and dance the rest of the routine while standing sideways, on the wall. Tanner and Logan start attempting to learn the dance moves as well, but it’s understandably hard to perform them while standing sideways. One by one teams starting finishing Cartoneros, while Kelsey & Joey finally find the park director and complete Fletero. Logan does an excellent routine, then messes up one of the final sideways moves. On her second try, Diana nails the dance and receives the next clue, which says to go to the pit stop at Polo Stadium. Logan gets it on her second try as well, while Tanner is still struggling to get the moves right on his third attempt. 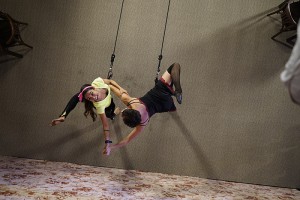 Cindy is having trouble getting the tango moves correct on the floor, and Tanner finally finishes the roadblock after multiple attempts. While Jazmine is talking about how her abs helped her tango sideways, Alex is struggling to stay on the wall. Diana & Justin arrive at the pit stop in first place and win a trip for two to Morocco. Krista was confident and graceful during her entire dance, and she got the clue on the first try. It’s a three-way race to the mat for 2nd place between team mother/son, Josh & Tanner, and Logan & Chris. Tanner & Josh get 2nd place, Denise & James are in 3rd, and Logan & Chris come in 4th place. At this point, everyone has left the roadblock except Alex & Adam and Jazmine & Danielle. Alex completes the challenge on his second try and sees Ernest & Jin trying to get a taxi. Danielle & Jazmine soon join the other two teams searching the streets for cabs to take to the roadblock. 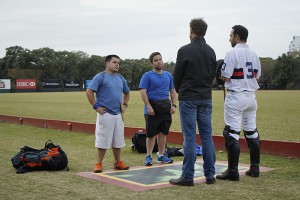 After a while, Danielle decides to run to the pit stop, despite Jazmine’s protests. Jazmine is barefoot because Danielle didn’t give her time to put her shoes back on after the roadblock. Danielle pretty much ignores Jazmine’s complaints, saying that she’ll buy Jazmine new feet when they win. Eventually, all three teams find taxis. Cindy & Rick get 5th place, Tiffany & Krista come in 6th place, and Joey & Kelsey are in 7th place. Once the three remaining teams arrive to the park where the pit stop is, there is much confusion as to where the mat actually is. Danielle & Jazmine come in 8th place, while Ernest & Jin (who spent a lot of time wandering around lost) get 9th place. Alex & Adam arrive at the pit stop in last place, and are eliminated.

What did you think about this episode of The Amazing Race? I think the next episode will be interesting, because Tanner & Josh are apparently going to try to turn everyone against Justin. While I don’t really agree with that idea, I do think it’ll make for interesting TV. Let me know who your favorite team from TAR 27 is in the comments below!