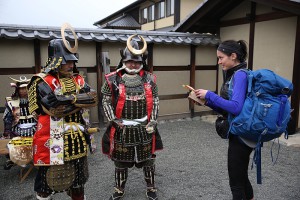 This week’s episode started with teams discovering that although they have a place to stay overnight, it’s essentially an office cubicle. Racers have definitely slept in more uncomfortable places, though – like a sidewalk in the rain. In the morning, teams discover that they will be taking a bullet train to Nagano, Japan. Jeff tells us that he has the hottest date, and hopefully it’s possible to find love and win the million dollars. Jelani & Jenny get tickets on a train that leaves at 6:30 am (it seems like the current time is 6:14 am), so some – but not all – of the other teams will be on this train. Jeff & Jackie and Laura & Tyler are also on the first train, Ally & Steve are on the second train; on the third train are Jonathan & Harley, Mike & Rochelle, and Bergen & Kurt. Harley & Blair and Matt & Ashley are on the fourth train. Bergen talks about how similar he and Kurt look, and says that he never imagined dating his long lost twin, but maybe it’s meant to be. After the first train arrives in Nagano (and Jeffrey falls), teams make it to the roadblock, Think Outside the Box, which requires one teammate to open a puzzle box using a series of complicating moves that must be performed in an exact order. Once they open the box, it will reveal a password that must be repeated to a guard in order to complete the roadblock. Teams will then be able to choose their next clue; inside one clue is a Date Night Pass, which allows that team to visit a Japanese Hot Springs at the next pit stop.

Jeffrey, Jelani, and Tyler choose to perform the roadblock. Tyler seems to be doing the best, with Jeffrey 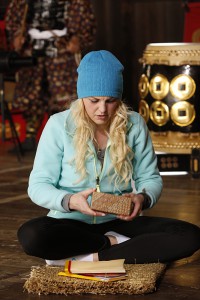 obviously struggling from the beginning. CJ & Lebya actually missed the bullet train because they were taking a selfie with it… I honestly wish that was a joke, they are ridiculous. They were talking about how everyone counted them out, but they’re going to win, right as they screw up immensely. I honestly don’t get why the selfie cam is a part of this race, it’s just annoying, but whatever. Tyler finishes the roadblock first (yay!), and he & Laura are off to Nishi-Guchi Zenko-Ji. Jelani finishes the roadblock first, and Ally begins her puzzle while Jeffrey is still struggling. At the detour, both Laura & Tyler and the lawyers (Jelani & Jenny) choose Share, which requires teams to feed each other noodles using only chopsticks, while a fan blows on them. Ally finishes her puzzle, followed by Jeffrey, who says that it was frustrating but he knew he couldn’t let Jackie down. I must say, it’s pretty entertaining to watch the teams struggle to eat/feed each other. Team soulmate (Laura & Tyler – they’re meant for each other) finishes first, but their taxi left, meaning Jelani & Jenny are now in first place. 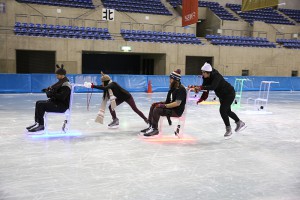 CJ says he’s pretty sure they’re far behind (really? what clued you in – that you were already in last place and then you missed a train?). JJ (Jackie & Jeffrey) and the olympians choose Chair, in which one racer must push their teammate (who is in a chair) around an iceskating rink for one lap, before switching places and doing it again, in under 3 minutes and 55 seconds. Ally is excited to be in the Olympic ice rink in Nagano, because she realized that she wanted to be an olympic speed skater while watching the 1998 olympics in Nagano. She and Steve complete the detour, although Ally struggles a bit to push him. Jelani & Jenny come in first place and win a Fitbit wellness kit – which includes one of everything Fitbit makes – a personal chef and one year of cooking classes, and a one year gym membership or one year of fresh groceries. I want this prize more than I’ve wanted any prize, besides a car. Laura & Tyler come in second place, and Phil tries to get them to talk about love again, but they sideswipe his questions well. Harley finishes the roadblock ahead of multiple other teams, and picks the clue with the Date Night Pass inside. Hayley is really struggling at the roadblock – she and Blair are now in 9th place, with only CJ & Lebya (who haven’t arrived yet) behind them – but she finally finishes it.

Jackie & Jeffrey are cute together, but Jackie seems a bit more preoccupied with flirting than with 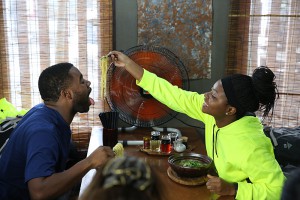 winning the race. She is struggling a lot to push Jeffrey, making me doubt that they will complete this the first try. After they fail to complete the two laps in the allotted time, Jeffrey asks Jackie if she wants to switch, but she refuses to give up. JJ finishes the detour with one second to spare, thanks to Jeffrey making up a lot of time. Bergen & Kurt are arguing over Share, because Kurt dislikes the taste of the noodles, while Bergen enjoys them, so they disagree about how hard this detour is. Mike keeps falling while pushing Rochelle on the ice, and she falls out of the chair and hurts her wrist. Mike keeps asking Rochelle to switch detours, and she finally gives in. Harley & Jonathan finish in 4th place, Bergen & Kurt are in 5th place, JJ are in 6th place, the hairdressers are in 7th place, and Mike & Rochelle are in 8th place. Hayley & Blair have trouble skating around the rink, but eventually they manage to finish in exactly 3 minutes and 55 seconds. CJ & Lebya chose Share, and they keep saying that they’re happy it’s an eating challenge, because they are so hungry. Production tries to make it seem like Hayley & Blair are neck in neck with CJ & Lebya for 9th place, but I’m guessing there was a big time gap between the two teams. Hayley & Blair come in 9th place, and Blair tries to breakdance, which is adorable. CJ & Lebya come in last, and I can’t say that I’m very upset that they’re eliminated from TAR. They just weren’t that interesting, they mostly made mistakes, and the whole “when will he give me a ring” storyline just annoyed me.

What did you think about this leg of the race? Are you surprised that CJ & Lebya went home? I wish the teams had needed to earn the Date Night Pass, rather than it be random luck, but oh well. Most of the teams worked really well together, which I enjoyed seeing. Who do you think will come in first next leg? If you could choose any of the prizes from TAR history, what would you want to win? Let me know in the comments below!