This leg of The Amazing Race, teams have to travel to Malta, then pick up an order of drinks from The Bridge Bar and make their way up Saint Ursula’s Staircase and deliver the drinks to the Knights of Malta to receive their next clue. As teams wonder where Malta is, Amy reveals that her leg has been hurting her, since she did rigorous training too fast before TAR. Brooke takes this opportunity to mock the way Amy is walking, since Amy is limping because her leg hurts. On the ferry to Malta, the dentists discuss the cyclists with Brooke. Apparently, it’s weird and sneaky that Kym & Alli are sitting by themselves. Apparently Brooke now hates the cyclists, as do Misti & Jim. This evolves into all the teams making a pact to U-Turn the cyclists. I completely understand U-Turning Kym & Alli because they are tough competition, but singling them out for wanting to sit in a different area is a bit ridiculous. I think Misti & Jim smartly targeted some of their biggest competition, but as for the other teams, the pact was a bit drastic. After all, Misti & Jim are just as much competition as Kym & Alli. 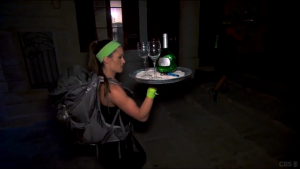 In Malta, teams are struggling to carry the alcohol without dropping it. Jim and Maya drop glasses before they leave the bar, and Bethany drops a glass right as she is delivering it. If teams drop something and it breaks, they must clean it up and then return to the bar to fill their tray before climbing the steps again. The cyclists and the wrestlers are the first to deliver the alcohol successfully. The clue instructs them to search for their next clue at the boat house at Zurieq Valley Sea Inlet. Kym & Alli get a taxi, and their driver makes a call to send a taxi to Brooke & Robbie, but the wrestlers think the cyclists are lying. The wrestlers go off in search of a taxi because of their ridiculous spontaneous mistrust of the cyclists, causing Double T to take their taxi. While other teams manage to find taxis, Brooke does what she does best – whines that this always happens to them, and it’s not fair. The next clue is a necklace 2 different departure times on it – 3  teams will 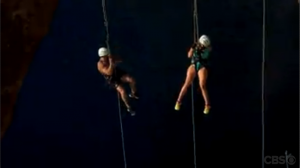 leave at 7:30 am, and 3 teams will leave at 7:45 am. The cyclists, Double T and the dentists get the 7:30 departure time, meaning the wrestlers, surfers and the scientists will be tied for last place (although only by 15 minutes). The next morning, teams get the clue for the roadblock Into the Blue, which requires one team member to repel into a cave, meet their teammate in a boat, and search the grotto for their next clue. 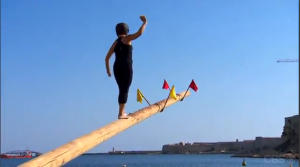 Alli gets the clue first, which annoys Brooke (boo-hoo). The cyclists are now off to the Church of St. Scholastica to search for their next clue on Triq Antica. At the roadblock, Brooke cheers on Bethany, even though Bethany is beating Robbie. I find this a bit interesting; maybe it’s because Bethany is nicer than the cyclists, but from Brooke’s cheering, it seems like she’s simply in awe of all Bethany can do with one arm. I agree that Bethany is inspiring, but it almost seems like Brooke is looking down on her by cheering for her because she only has one arm. If Alli only had one arm, would Brooke be nicer to her? Or would she still see her (and treat her) as competition that she needs to beat? Amy swam past Robbie, which she was very proud about, since she started the swimming part of the roadblock last. Kym & Alli find the clue, which is a blind detour. They have to choose between Flag or Shine with no information about the detour. Kym & Alli choose Flag, which requires teams to grab a flag at the end of a greased log – one team member must grab a yellow flag, and the other has to grab a red flag. The dentists and Tim & Te Jay see the cyclists performing the detour, so they head down

there instead of finding the next clue. Double T realizes that they need to find the detour clue, so they look for it and find their speed bump, which requires them to pain the Maltese cross on two shields. After they each try running on the pole several times, Misti & Jim realize that this is a detour, but they don’t have a clue for it. They are confused for a bit, then decide to go look for the clue box. 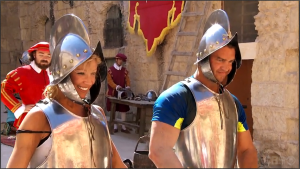 Kym decides that she can’t get the red flag – which is the furthest flag on the pole –  due to her fear of heights, so the cyclists switch detours.  The other side of the detour, Shine, requires teams to don a suit of armor and then polish their teammate. Bethany & Adam go to the Flag detour and immediately use their express pass, then receive a clue telling them to go to the pit stop at Fort Manoel. Tim & Te Jay finish their speed bump quickly, then head back to Flag. Only Double T and the scientists are currently attempting the Flag detour. Amy tries to run up the log, but her leg hurts too much, so the scientists switch detours. Adam & Bethany come in first place and win $10,000 each. After listening to Brooke complain about the Shine detour constantly, Robbie finally makes her admit that she wants to switch detours, and they head to Flag. Misti & Jim finish the Shine detour first, which they of course say is because it’s so much like being a dentist. Tim is stuck trying to get the red flag, while the wrestlers can’t even get the yellow flag. Robbie proclaims that they will never be able to do it, so they go back to the first detour. The dentists are team number 2, the cyclists come in 3rd place, and the scientists are in 4th place, leaving the wrestlers and Double T to battle it out for 5th place. Tim & Te Jay switch detours, basically ensuring that they will be eliminated this week. Even after the wrestlers leave, Double T keeps up hope. I have my fingers crossed that Brooke & Robbie won’t find a taxi, because Tim & Te Jay have one waiting for them. Unfortunately, Brooke & Robbie arrive at the mat before Tim & Te Jay, meaning Tim & Te Jay are eliminated from The Amazing Race.

Although I’m disappointed Tim & Te Jay were eliminated, the race is getting down to the wire and all of the remaining teams are really strong. I’m glad that there isn’t a team this season that’s obviously being carried by other teams. What did you think about this episode? I was a bit annoyed with how much Double T argued, especially because it was clearly much harder to get the red flag than the yellow flag. But in the end, they kept up hope instead of blaming each other. Who do you think will be eliminated next week? I think it might be Brooke & Robbie, because it seems like Brooke is cracking a little under pressure. Let me know who you want to win TAR Season 25 in the comments below!