This leg of The Amazing Race began with Misti telling us that she cut her foot at the end of the last leg, but it will just make her work harder to make it to the final 3. At the pit start, Misti & Jim receive a clue telling them to take a jeepney to Rajah Sulayman Park. Amy & Maya get a jeepney, then allow the driver to stop and pick up the dentists. I get that the scientists are nice, but I feel that it’s pretty stupid to ask a team to share a cab this late in the race, because it could take the dentists a while to find a jeepney on their own, and that lead could’ve saved the scientists in the end. The dentists and scientists catch a jeepney on the wrong side of the road, so it will take them much longer to arrive at their destination than it will take the other teams. The surfers arrive at the clue first, which leads them to a blind detour- This or That. Robbie & Brooke reach their speed bump, Roadside Assistance, which requires them to travel to Manila’s waterfront and help a vendor replace his broken padyak by transferring all of his goods onto a new padyak. Brooke says that she thinks it’s a long speed bump, but when Robbie disagrees with her, she gets mad and tells him to stop contradicting everything she says. Bethany & Adam arrive at This, which requires teams to shoot hoops into a basketball while being guarded by a neighborhood team. Once they’ve scored 21 points, they will receive their next clue. Brooke & Robbie complete their speed bump and head to This, although they think they are currently in 1st place. 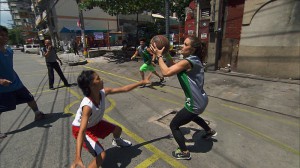 The scientists and dentists are still in the jeepney, and of course production encouraged them to talk about how smart they are, even though they’ve made travel mistakes before. It looks like either the dentists or the scientists will be eliminated this leg, because they are very far behind the other two teams. The two teams finally ask the driver what direction their destination is in, only to find out that they are headed in the opposite direction and need to get off the jeepney. Misti asks the scientists if it’s worth the risk to get off the jeepney, and they’re perplexed at her question, because they obviously need to get off the jeepney and head in the other direction. Adam & Bethany complete the detour and are off to Divisoria market to get their next clue at a marked jeepney. Although Brooke bragged that she used to play basketball, when she did poorly, she said it was because she hadn’t played in 10 years. Brooke eventually got her mojo back 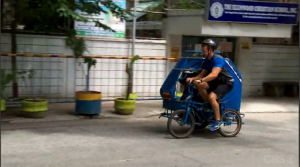 and carried the team to victory. The scientists and dentists arrive at That, which requires teams to be both passenger and peddler of a padyak. They need to complete four laps of a course in under 17 minutes and 55 seconds in order to receive their next clue. Adam & Bethany make it to the market but they lost their clue en route, so they are searching sort of blindly, as Adam partially remembers one of the street names of the junction they’re looking for. 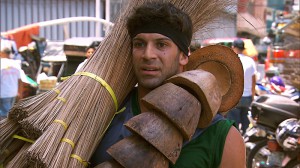 On the second lap of the race, Amy tries to pass Misti and ends up veering to the left and crashing into a car. Although Amy ends up being ok, Misti didn’t even slow down to check if Amy was alright, which I found a little rude. Misti or Jim could’ve at least called out to Amy and asked if she was hurt. Regardless, Amy gets back on the padyak and ends up passing Misti again. Amy decides to do her second lap without switching drivers, and Jim takes over again. Brooke & Robbie reach the next clue ahead of the surfers, which is a roadblock. Deliver the Goods requires teams to pick up and deliver two coconut products and deliver them to three different shops. Robbie decides to do the detour, but he misses the delivery slip telling him where to deliver the goods, and just wanders aimlessly. The scientists and dentists finish the detour and are off to find their next clue, while Robbie finally realizes that he needs to go back to the vendor and find the delivery locations. Meanwhile, Adam & Bethany search Adam’s bag and find the clue, then arrive at the roadblock right after the dentists. Adam and Jim make the same mistake as Robbie, wandering into the market aimlessly because they don’t see the list of delivery locations. Robbie finds the first vendor, but he didn’t bring the correct number of items, so he has to go back and get more coconuts. Amy arrives at the roadblock and heads off to the first location, while Jim & Adam finally realize that they need to go back to find the marked locations.

Robbie finishes the roadblock, Adam runs ahead of Jim who is trying to follow him, and Amy still can’t find the first vendor. 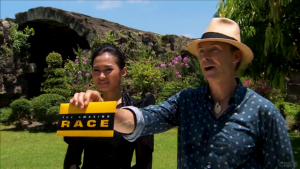 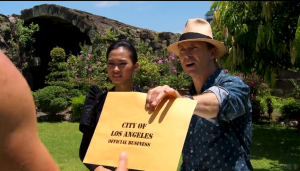 them their next clue, as well as a manila envelope that they aren’t allowed to open until they are instructed to do so. The racers are now off to their final destination, Los Angeles. In the car ride and at the mat, Amy is fighting dehydration and trying not to faint. After she receives water and some shade, Phil tells the scientists that they are the last team to arrive. However, for the first time in Amazing Race history, 4 teams will compete in the final leg! I can’t tell you how happy I am about this, I honestly teared up when I saw Maya & Amy’s reactions. They tried so hard this leg, I really think they deserve to be in the final episode of TAR. Phil tells the scientists that he will eliminate a team some time on the next leg of the race, then gives them their clue and envelope.

I honestly didn’t see this coming, although I was wondering if there would be a twist this episode because the final clue said the last team may be eliminated, whereas at this point in the race, it usually says the last team will be eliminated. I’m rooting for either Amy & Maya or Bethany & Adam to win, I think they both really deserve it. Who do you want to win TAR season 25? Who do you think will be eliminated during the middle of the next leg? Let me know in the comments below!