The ladies are back from the Philipines and jumping back into their real lives again. Can the Zen they achieved last in Atlanta, especially with NeNe around? At this point NeNe is in New York for  her broadway debut. Her husband Gregg and son Brentt (really what is with the 2 g’s and 2 t’s)  are with her. Gregg takes them to lunch at Sardis and gives her a pep talk. They also 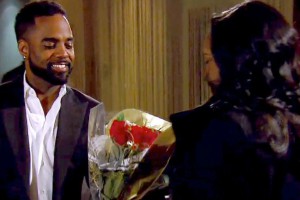 lay down some ground rules for Brentt. Answer your phone, text us back and oh, don’t walk any farther than a block. A little over protective if you ask me but OK.  Kandi and Todd are working on their therapy homework. It’s date night, no phone, no social media, just the two of them. Todd has just come from the airport and Kandi is dressed to kill, or dressed to get laid. Talk gets serious. Their one year anniversary is coming and Kandi admits she thought at points they may not make it that far. He tells her that his show has been renewed for another season and Kandi is happy. What makes her unhappy is he tells her that means he’ll be out-of-town more. She wants them to not be apart any longer than two weeks. Does this mean baby plans are on hold? He says he doesn’t have time for a baby but he wants her to be in LA with him. Is Kandi going to leave Riley and spend more time in California to save her marriage? 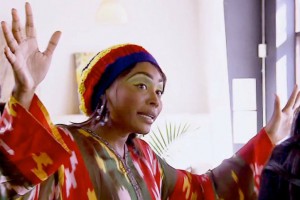 Cynthia is getting Noelle ready for homecoming and Kenya is there to help choose an outfit. It’s also time for Kenya to start production on her pilot Life Twirls On. Cynthia gets Peter to help her with her Jamaican accent because after the table read honey that accent needed some help.  She shows up on set looking the part, and sounding a lot better but can she get her lines right. It’s always hard when friends work together, especially when one is in a position of power. Cynthia is having a hard time delivering her lines and getting herself in position. Eventually she does get it right, they film the scene and their friendship remains intact. Kenya goes on to film the rest of her pilot. Will you be watching Life Twirls On if it gets picked up?

Phaedra had an epiphany in the Philipines. After being moved by her guides story of being a single mom to 5 kids and her own newly found 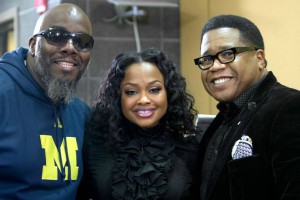 single parenthood she has decided that she needs to do something about how young black men view life. She wants to hold a rally for young minority boys that will empower, encourage and inspire them to be better people. To step up to their responsibilities and be role models. She puts together a panel of successful, responsible black men like Judge Mathis to be panel member at her Save our Sons rally.  Phaedra has invited all the ladies to help her serve at this event. All but Kandi who had a prior engagement agreed to attend. Even NeNe flew in from New York to support her friend. The rally is going well, everyone has arrived except Kenya and NeNe. They start to serve lunch and NeNe arrives. All is fine until Claudia decided to bring up Dr. Jeff. Damn it Claudia I like you but there is a time and place for drama and this is neither of them.  Claudia says the girls 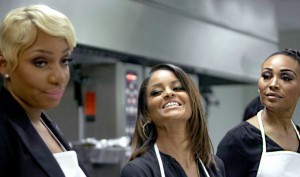 worked out a lot of issues. She asked if she like the video they sent. Not believing for a minute anything is worked out NeNe says she thinks the video was fake and while she’s “glad” they worked things out she didn’t think it was fair they all ganged up on her. Well Claudia is not backing down from NeNe and keeps badgering her. NeNe is really trying to not let Nay-Nay come out but whoop there she is. She tells Claudia she’s not important takes her gloves off and goes toward the door. Heaven forbid NeNe stay in a room right? Well Claudia follows her, the noise level is loud, everyone can hear them in the other room and Kenya walks in and has to pull Claudia away so NeNe can leave. Porshe and Phaedra follow NeNe and the other girls hold back and finish serving lunch. Looks like the zen didn’t last for long and the ladies are divided AGAIN.

Next week is the season finale. Will everyone minus NeNe still be on the same road to healing they were on in the Philipines or has 30 minutes with NeNe erased all that?  Don’t forget to check out our BRAVO page for all our recaps on all the Bravo shows plus Jon is reading you the ladies blogs and giving you his take on the weeks events. ALSO we are covering HELLS KITCHEN, Survivor, Amazing Race, RuPaul’s Drag Race and so check out their pages to keep up on what’s happening. Head over to AMAZON.COM to do all your online shopping. You’ll get all the same great prices and it will also help us to continue to bring you coverage of all your favorite reality shows.