Brandi meets at Yolanda’s house for another yoga session. They sit and chat first about their cleanse they are doing together which requires eating better and no drinking for 21 days! Brandi is fine doing it and most likely is to prove a point she is an alcoholic but she does say “Thank god for Xanax”. Brandi feels like Yolanda has taken her under her wing and has been there more for her than any of the other ladies. Yolanda is taking 20 herbs to help with her lyme disease. She later meets with Bob & Larry to organize a scavenger hunt for the ladies to play. She wants to make “The Dream Team” shirts for all the ladies to which she says she learned her lesson from last season with the name tags having hearts on only some name cards.

Kyle and Lisa V do tea time at Vanderpump estate. Kyle still can’t figure out why Kim blames her and is allowing Brandi to come between them. (Broken record much!!) Lisa tries to give her advice having reflected on all of this and tells her Brandi is just trying to stay in the circle and you have to just ignore her. Think she as well just needs to focus of her relationship with Kim and not Brandi.

Eileen and Vince go out to eat to talk about his script reading they are hosting that Vince wrote. Eileen tells him about her lunch with Kim and Kyle. She just wishes the ladies would see life is too short to fight like this. Vince tells Eileen he wants to have booze at the reading to loosen up the ladies. Eileen says no and she is nervous to do that since Poker Night was such a mess!

Brandi and Jennifer have a nice afternoon chat at the beach where we find out that Jennifer is a recovering alcoholic too. Brandi gets a call from Ken inviting her to Lisa surprise birthday party. Which was real nice but then he adds “can you be on your best behavior” which Brandi found to be fucked up to say. She tells Jen about Kim’s slip up taking Monty’s pill. Jennifer explains how that isn’t good and it took her 5 years to get back into social circles where drinking was happening. Jennifer asks if Kim is going to classes or has a sober person and Brandi says she doesn’t know.

The ladies are on their way to Eileen’s house and we got the Richards sisters in one car and Lisa Squared in the other. The sisters joke about how they had braces and were fat when they were kids! (YEAH RIGHT) Kyle says she is happy to go to the reading since she likes Eileen and Kim agrees but Kyle tells by her voice something. Kim says she is just annoyed with her butting into their issues. Kyle tells Kim again that she doesn’t trust Brandi. Lisa Rinna really feels Kim needs an intervention and that her behavior is weird but Lisa V just doesn’t think it’s a good ide. Lisa Rinna just doesn’t get why everyone is so scared of Kim. Lisa V tells her she hasn’t seen anything to do something like that but that she should talk to Kyle.

The Reading at Eileen house with Tom, Steve & Jimmy ( Vince brother )                                                                                   Ladies arrive and Vince asks Kim who the most famous person is she worked with. Kim says Betty Davis and tells a cute story of when she was a kid she hid under her bed and caught Betty taking off her wig. But she wont say what her real hair color is cause that is Betty’s secret ! HAHA All the ladies sit down and look over the script and Lisa V wants Lisa Rinna role since hers doesn’t speak much. They run thru the crazy story with hookers, poker & sock puppet which Kim played just perfectly! Lisa V asks Eileen to see her Emmy. That thing is sooo big and Lisa was so excited to hold it!The ladies again go into the same conversation of Kim, Kyle & Brandi issues. Kim just says its been so hard with Monty and that Brandi has really been there helping her with hanging out. Lisa Rinna thinks that Kim is loving the ladies fighting over her so she can have attention but at same 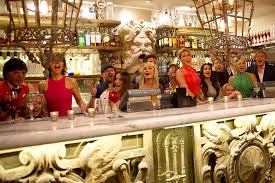 time Kim says she is annoyed this all keeps coming up.

Lisa surprise party arrives and everyone is getting there early. Eileen and Lisa Rinna look amazing in their pink dresses! Kim, Brandy, Kathy & Mark ride over together and joke in the car about the party. Brandi says she “accidentally thru a glass of wine in Eileen face” causing Kathy to joke saying should I act like I don’t know you girls! Lisa tells Eileen she is worried about Kim since she said her weakness is being isolated. Which at the same time she told them that she said she has been isolating herself more lately. Eileen just doesn’t get why Kim wont stand up for her sister to Brandi more. Yolanda arrives and pulls Kim aside and tells her she is there to support/help in anyway no matter what! The ladies have a nice hug to which you clearly notice that Yolanda and Brandi are wearing same dress just different colors. Ken and Lisa are on way to dinner when Ken says they have to stop by Pump for an issue. Lisa clearly doesn’t want to do this 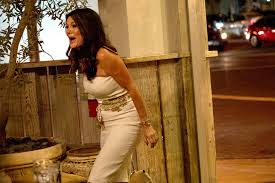 and fights it saying she doesn’t want to do that since its her birthday! Lisa walks in to everyone shouting surprise which really took her back! She’s happy to see everyone and when shaking hand says to Brandi “How did you make the cut”. Everyone sits down for dinner now. Kyle asks Ken why he invited Brandi and he tells them he doesn’t hold grudges and really didn’t want to leave anyone out! Lisa gives her little speech to thank everyone but also takes a dig at Brandi saying “Bitch for showing up”. Luckily Brandi w 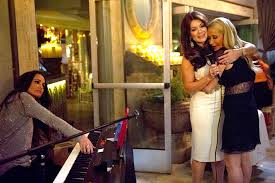 as in the bathroom and didn’t have to hear the speech. Lisa comes over to Brandi and tells her she wants her to sing her a song knowing Brandi hates to sing. SO Brandi does it and sings a sorry song to Lisa! HA They all joke and play around singing a dumb made up song. But hilariously Brandi says it’s all the menopause women fighting over the microphone!