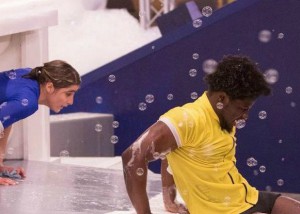 We pick up where we left off at the beginning of the HOH Challenge.  Everyone is trying to find the letters to the saying Fight Dirty Laundry in order and going the the wringer, literally. This obstacle course is hard but we see Zach and Kevin in the early lead. As the agitator moves around the bubbles get crazier and crazier and the slide into the tub gets slicker and slicker. Sarah takes a couple of good hits to agitator on the way down. Bruno is getting lucky finding the letters he needs right away but the obstacle course is giving him troubles because of his injured thumb. He’s powering on 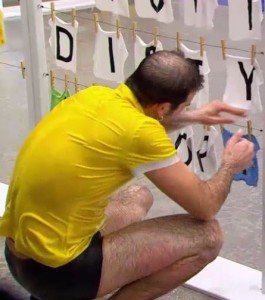 through the pain. Zach is trying to throw the competition, it’s not time for him to win HOH yet but he’s not making it obvious. Godfrey realizes that he is totally out of this game and starts helping Bruno find his letters to so that he can win. Here is the question, is this considered cheating? Should Bruno have been disqualified. Season One Emmett was DQ’s for helping Jillian in a challenge, yet Bruno seems to have had no consequences for this. Granted we don’t know what he rules were before the challenge began. As viewers we are given a quick run down but the house guests are given detailed instructions, maybe you can’t help other people find letters wasn’t included. Bruno grabs his last letter and runs to his board. I have expected to Rocky theme to play has he ran and hit the buzzer. Bruno has won HOH! 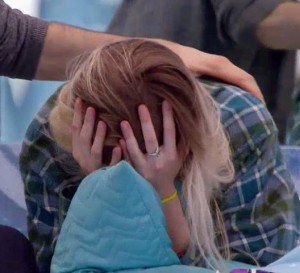 The Chop Shop is in power again and Sarah knows she’s going up. She has an emotional breakdown in the bedroom. Zach is delicately playing both sides of this house. He knows of course she is going up but is trying to not let on that she is and offers her some hope. Johnny is also fearing the worst as he was in on the master plan of back dooring Graig. Kevin needs to do some major damage control. He tells Bruno he had nothing to do with the Graig plan, he was kept in the dark about it all. He tells Bruno that he is down with his plan, Bruno isn’t really buying it but they two “make a deal” to no nominate each other. Neither of them are really planning on sticking to this. Is this the end of the new Hexagon alliance formed last week? 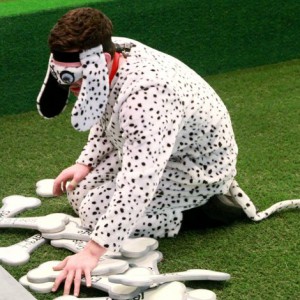 Bruno announces it’s time for the Have Not competition, and it’s CRAZY. First he has to pull names for teams. With two extra people he got to choose two people to be haves for the week. He chose Ashleigh and Bobby because they were have nots for the week. The teams ended up being Kevin, Godfrey and Zach on team one. Team two was Pilar, Brittnee and Willow and team three was Sarah, Johnny and Jordan. Right away, I know it team two is not winning this challenge. Not for the most INSANE competition I’ve ever seen. One of them is dressed like a dog and is blindfolded, the other two stand on either side of a maze and have to direct the “dog” as they crawl through the maze. On the one end is bones with food item names. They need to bring back as many bones in the time given. Those food items are what they will be given for the week. I love they had to win there food like the early seasons of Big Brother.After The team with the least amount of bones are the have nots. The insane part you ask, parts of the 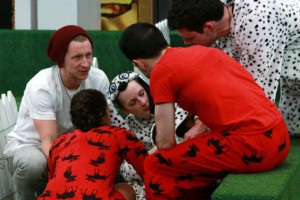 hedges are lined with electric wires and they are wearing shock collars. I won’t lie, It was hilarious watching these guys get shocked. Godfrey and Zach did a great job with Kevin. After a rocky start Sarah was being led really well by Johnny and Jordan. Then there was poor Willow. Pilar doesn’t know her left from her right and that girl was getting shocked like crazy. She’s convulsing and running wild and you couldn’t help but laugh. Like I predicted, Willow, Pilar and Brittnee are on slop. Bye sassy Brittney, I know you don’t do well on slop, see ya next week….I hope. Everyone runs to poor Willow who is weeping from being shocked so much.

Before she becomes a slop zombie Brittnee takes some time to talk to Bruno, after telling him how much she respects him for being himself in the house and playing a smart game as a way to save her ass they agree they won’t nominate each other. Is this going to last, I’m not sure, if Veto needs to be used I’m sure Brittnee will go up on that block. We can’t go an episode without watching our showmances develope. Kili is in full swing but Kevin is also playing this as a future jury vote for 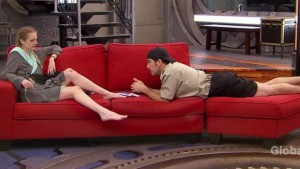 him. While the girls talk about their showmances and how hard they are, Sarah just wants to slap them. She’s frustated the girls are hiding behind the guys. Bobby doesn’t want Sarah to go home. If Johnny wins Veto he wants to send home Kevin but Ashleigh isn’t too keen on sending home an potential ally. Finallyh Sarah gets Bruno alone. He tells her she’s basically going on the block because if he doesn’t 10 people will gun after him. She’s smart enough to put the pieces together andrealizes her alliance has put up no resistance to her being put in danger and she is angry. Johnny tries to smooth things with Bruno telling him his beef was only with Graig. Of course Bruno is going to nominate him but he butters him up just incase he wins Veto. Bruno is one of the smartest players I’ve seen in a long time. He chooses is words carefully and thinks 2 or 3 moves ahead. I only wish he would realize Zach has his hand in every pot in the house and he should be on his radar. 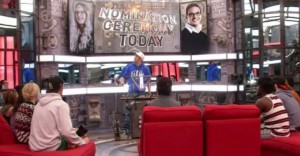 Bruno enters The Vault to make his nominations. His short list is Johnny who is a threat in every aspect of this game, socialy, mentally and physcially. Kevin who is athletic and one half of a showmance and Sarah, who is a very manipulative player. All threats to Bruno’s game they must go. He sticks with the plan and nominates Johnny and Sarah. Who will be his main target? There is a scheduling change this week! Jon and I will be live at 8pm for our Recap on our BBCAN page and we may are working on having a special guest with us this week as well! We also will be having exit interviews  on Thursdays so tweet us your questions #YRRLive right after the episode so we can ask them what you want to know.  Check out our exit interviews with the evicted house guests and past shows below.