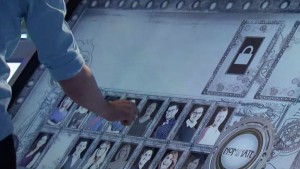 I hope everyone had a happy and safe long weekend. Hopefully you didn’t go through feeds withdrawal to badly. But good news everything is back up and running. This episode we picked up with Kevin pretending to celebrate his HOH win when he gets called to the Diary Room. Everyone is still in the back yard and Kevin enters the DR and starts freaking about how he never wanted this HOH, what’s he going to do. Well buckle up Kevin because your life is going to get 10X worse. They tell him he needs to go into The Vault. There waiting for him is the nomination board and a clock. He has 5 minutes to decide his nominations and lock them in. If he tells ANYONE about the instant eviction he will be evicted from the house. As he starts talking through his strategy all I can think of is NO KEVIN I hope they aren’t Topazing you. Didn’t you learn, aren’t you a superfan? Thankfully they didn’t air his talk to the house guests and is strategy is safe and sound in his head. Kevin decides that Brittnee and Naeha are going up on the block with Naeha as the target! NOOOOO Kevin, bad Kevin. Work with Naeha you silly boy! To help cover Kevin’s long absence for the backyard Big Brother gives Johnny a birthday party 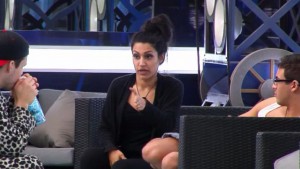 Game talk runs rampant that night. Chop Shop wants Naeha gone. Newport talks to Kevin and the Bromuda Triange is formed. They give him good reasons to keep Naeha.  Naeha reveals that he was going to go home. He was not a pawn last week, he was the target. Had Kevin not already locked in his nominations I think she would have been safe. Does Kevin have the ability to turn this target to Brittnee without exposing the instant eviction? The next morning Arisa’s voice is heard “House guests to the living room” Oh crap, this is never good. Arisa tells them it’s an instant eviction and Kevin now has to

reveal his nominees. He sits Brittnee in the nomination seat first and puts Naeha beside her. Naeha knows she’s going but makes a good case for her to stay in her speech. The next twist thrown at these guys they each have to go in the vault and write down who they are nominating Survivor style. To make matters worse they have to read aloud their vote in front of everyone. Big Brother is being especially cruel to this group of house guests. By a vote of  9-2 Naeha is evicted from the Big Brother Canada house. She exits the house into an empty studio to meet Arisa. Good news for Naeha though, she learns about her chance to get back into the house! Naeha is a fighter and at this point her only real competition is Sindy. May the best woman win. 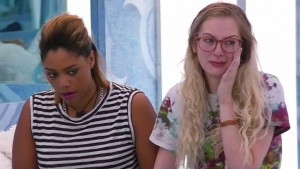 The girls are gutted Naeha is gone. Sarah is devastated because she along with Johnny voted to keep Brittnee. Sarah’s vote wasn’t so much a vote against Brittnee but more of a show of love to Naeha because she knew she’s be going. Now she’s so scared Brittnee is going to abandon their alliance. I stand by my choice of Brittnee as a favorite and this episode made me happy I did. She could have went all insane and been angry at Sarah but she understood. She comforted Sarah and told her it was going to be ok. They are solid. This could have turned into a bitchy cat fight but Brittnee is just that amazing a person. The girls just realize that they are being picked off one by one, and the decide it needs to shop. 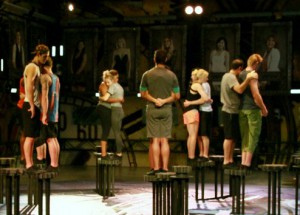 Now it’s time to find a new HOH. Randomly put into pairs they are all standing on elevated gears. Over time they will step on to smaller gears. If one falls both are eliminated and must pick a box that contain a reward or punishment. They have only a minute to decided who gets it. Big Brother gods paired up Sarah and Brittnee. Is this a sign of good things? These two are talking through it, supporting and encouraging each other through the whole challenge. Doing this to avenge Naeha’s eviction is their goal. Graig and Bruno are the first to fall and  after rock, paper scissors Graig wins $1000 and a letter from home. Bobby and Zach fall second with Zach winning a 4 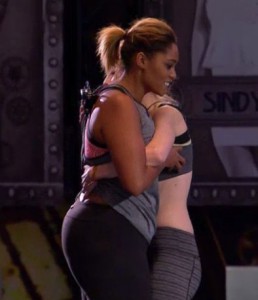 week slop path. Jordan and Ashleigh  are third off and both decide to take the punishment of wearing snorkeling gear around the house for 24 hours. At this point they are on the smallest gear and told to stand on one foot only. Pilar and Johnny fall and Johnny is now taking a pie in the face every time Big Brother asks “Who wants pie?” in the next 24 hours. Godfrey and Willow and Brittnee and Sarah are battling it out. With communication and trust helping them through this challenge, Willow and Godfrey fall. Willow has loses her rock, paper scissors match and has to lay on an over sized gear wheel for the next day.  Sarah and Brittnee have WON the HOH competition. Only one can be HOH though and Sarah hands it to Brittnee because she was on the block twice. It really didn’t matter with these two, they share the same strategy and even if they didn’t I think Sarah knows she could sway Brittnee to her point of view.

I am so excited to watch the first girl power week in the BB house! Who in the Chop Shop do you think needs to be cut first? Comment below and let me know.  Don’t forget to join Jon and I this week on Friday at 3pmEST for our Recap on our BBCAN page.  We also will be having exit interviews  on Thursdays so tweet us your questions #YRRLive right after the episode so we can ask them what you want to know.  Check out our exit interviews with Risha and Sindy below.