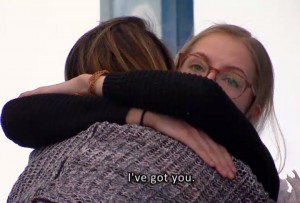 Sarah and Brittnee are at their lowest point in the game. With Sarah on the block as the target and both of them have nots the two have their back against a wall again. Godfrey doesn’t have a care in the world, and Ashleigh has just done EXACTLY what Zach wanted. So much for playing your own game Ashleigh. Brittnee is not letting Sarah wallow, they will win this POV. Best case scenario, Brittnee wins and pulls down Sarah, both of them are safe. These two have become the Sabrina and Rochelle of seaon 3. The whole house wants them out but which will sit in the final 2. Ashleigh is feeling the pressure of HOH, not wanting to lie to Sarah yet not wanting to tell the truth. Sarah just wants an honest answer and she goes to Zach who likes to her saying Godfrey is the target but Zach can’t lie to save his life. Sarah is on to him. 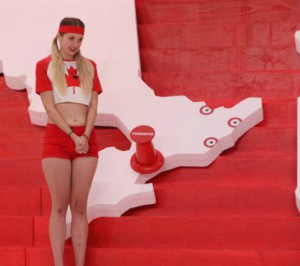 Playing in the POV this week is everyone but Pilar which sucks for Ashleigh. She didn’t want Brittnee fighting for Sarah. Godfrey is throwing yet another competition. This competition is divided into parts. First Pilar calls everyone into the living room to watch a video. It’s a map of Canada showing the location of Ramada hotels all across the country. They need to memorize these locations for part 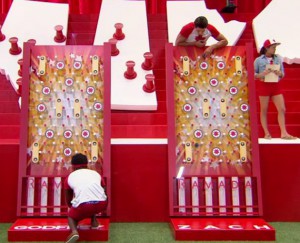 one. In the backyard there is a giant map and tacks, they each take turns pin pointing locations. The more you get right, the better you are for part 2. Godfrey gets the least right with 2 and Zach gets 6. Sarah is close behind him with 5. The last part is The Price is Right Style Plinko. They must get their balls in the slots to spell Ramada on letter at a time. Each letter the last one to do it is eliminated. How many cities the got right is how many balls they get. Ashleigh is the first elminated. Zach elminates Brittnee. It comes down to the D and the A. As Sarah says 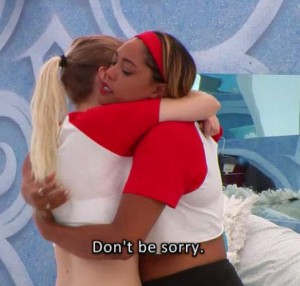 she can’t wait to stick some D up Zach’s A! Luck is on Sarah’s side today and Sarah wins VETO! It’s a bitter sweet victory for Sarah. Finally she’s won something, she’s saved herself BUT now Brittnee is most likely going up. Zach is pushing Ashleigh to put up Brittnee. She still insists that it’s her HOH and she’ll do what she wants. Brittnee is super excited for Sarah. Even though it means her possible eviction she can’t be anything but happy for Sarah. Sarah is broken up inside about it but Brittnee won’t let her be upset about it. She wants her to be proud. 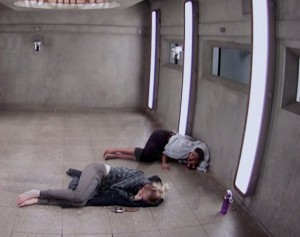 The two girls are locked in that have not room devatstated at the thought that Canada hates them. Big Brother has taken away their beds and their blankets. They’ve got nothing but a hard floor. Sarah can’t stop crying and Brittnee is trying to comfort her through her own pain. The two settle down and the 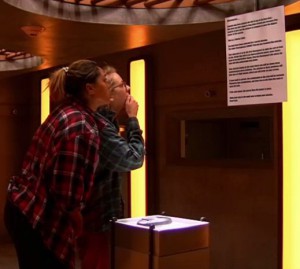 lights go crazy. So dramatic says Brittnee then all of a sudden a safe rises from the floor.  They don’t know what’s happening but they know it’s something amazing. From the ceiling their instructions are lowered. It’s a secret mission. No one can now. Canada has chosen them to compete for a secret power. To begin competing they must go to the vault. There they are given three math clues. The answers put together unlocks the code to the safe. They aren’t allowed to work together it’s Sarah Vs Brittnee. Who will win. Brittnee is the first to unlock the safe and there she uncovers two safety chains. Big Brother tells her she 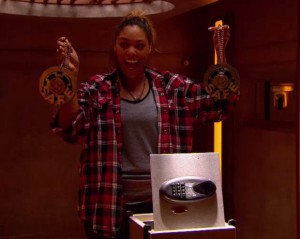 has one the biggest power of the season. She has to replace one of Ashleigh’s nominations but she can replace both with her OWN nominations. Reveal the power and she could be immediately evicted. The safe goes back into hiding and she tells Sarah she got it but can’t tell her what. Queen B is in power again! I can’t wait to see what happens on Wedneday. I’ll be in the audience and I’m sure the atmosphere will be electric! The two go back to their have not room and give an Oscar worthy performance of being down and out. 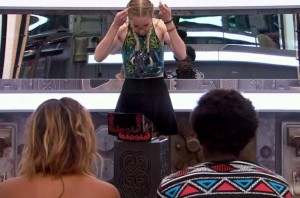 At the Veto ceremony, Godfrey makes a plea to not use it. Save Ashleigh the trauma of having to make another nomination. He’s leaving this week anways. Of course Sarah saves herself and as King Zach  has determined Brittnee goes on the block. She’s pretending to be broken up while laughing on the inside. It will be fun watching that side of the house be so confident that they are breaking up that pair meanwhile Brittnee is sitting on the hugest superpower in BBCAN history! 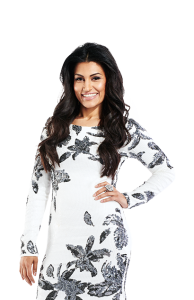 Jon and I are so excited to talk about all the twists and their impact this season with  BBCAN3’s  Slayha herself Naeha Sareen this Friday AT 3pm We’ll see how she feels about all the dramatic twists and how she feels about being one of their victims. You aren’t going to want to miss this show! Before then though you need to check out the amazing exit interviews with all the evictes and our shows with Graig and Johnny below. As always  all our recaps are on our BBCAN page.  We also have exit interviews every Thursday so tweet us your questions #YRRLive right after the episode so we can ask them what you want to know.  Check out our exit interviews with the evicted house guests and past shows below.