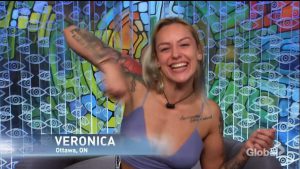 During the nomination ceremony, Veronica looks extremely nervous, but afterwards is excited that she stirred up drama with her vote and didn’t hit the block. She is evil and lies way too easily, and no one believes or trusts her. 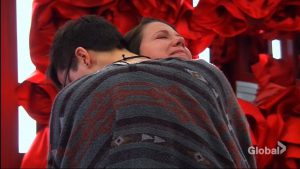 Maddy is crying to Johnny after noms. Liv walks in and says that if she wins POV, she’ll pull Maddy off the block. Maddy says that she wants people to feel like she’s weak and forget how passionate she is about the game. She says in DR that she is crying on the outside, but on the inside, she is thinking that there is no way she is leaving the house in Week 4. Merron on the other hand is exactly the opposite, exuding positivity and relishing the chance to prove himself this week. Johnny comments on their polar opposite reactions to being nominated. Merron says that he wants the full BB experience, which includes being on the block. He is hoping that he has his moment in the POV competition.

Houseguests are chosen for the POV competition: Erica, Maddy, Merron, Liv, Ali and Ryan are playing and Erica selects Will as the host, then jokes that she won’t be able to understand the instructions. 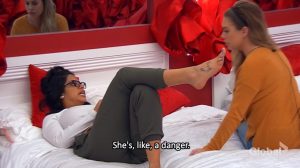 Liv and Ali really want Veronica to be backdoored this week, so if either of them win the veto, they are using it to pull Maddy down, as long as they can convince Erica to put up Veronica. Plus, they say that she was definitely the rogue vote against Olivia, and they both want her to go home this week. I don’t blame them. As a live feeder, the Veronica Show has gotten old FAST. She lies as easily as she breathes, and no one trusts her. 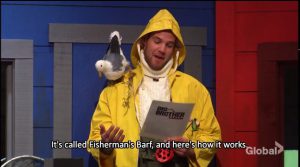 For the POV competition, Fisherman’s Barf, is played in 2 rounds. The first three houseguests to untangle their ropes from a series of three posts, wrap it around themselves and ring their bell will advance to the second round. The other 3 will be eliminated. Olivia is the first to ring in after untangling her rope. Next, Erica rings her bell and the final player moving on to the second round is Maddy. Throughout the competition, people are yelling for Maddy what she asked them to: What did you come here for? Who wants this? 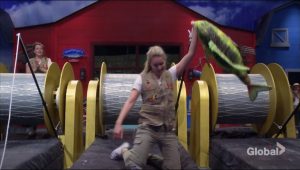 For part 2, Olivia, Maddy and Erica must dive over a huge drum to pull up their fishing line until a fish is pulled up by their line. Maddy and Olivia are essentially throwing themselves over the drum in the most unflattering manner, while Erica is doing perfectly landed somersaults gracefully. She says that this veto is hard and even harder to throw. She takes multiple breaks, including a puke break, she fixes her ponytail repeatedly. Then she’s back to graceful somersaults. She checks the amount of rope that Maddy and Liv have left and realizes that she’s too far ahead of them to continue throwing it. She steps into overdrive and her fish is the first one to come out of the water, giving her a 3rd competition win in 4 weeks. 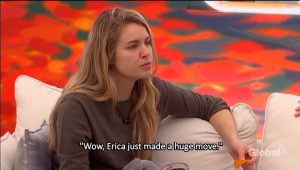 Ryan points out to Hamza that he thinks that Erica will backdoor Veronica. Hamza says that they will save Merron either way. Meanwhile, Liv and Ali talk to Erica about using the veto on Maddy, who would be eternally grateful to them. They say that the 3 of them are the only ones willing to take a shot at Veronica. Erica is a bit hesitant as she doesn’t want to grow the target on her back. (This was edited heavily for the show. On live feeds, Erica has been down to get Veronica out since the veto draw.) 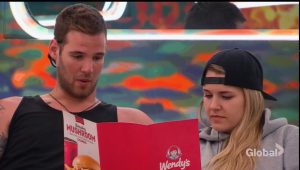 Erica shares a Wendy’s meal with Will. She says that she knows that he’s been missing his son and wants to give him a treat. Again, this was heavily edited for the show. During their meal, Erica talked to Will about how difficult it is to talk game with him because Veronica is always around him. He basically told her that his game would improve if she were no longer in the house. 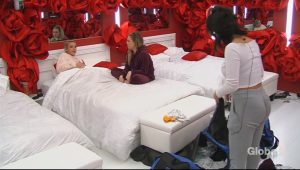 Liv and Ali approach Veronica to “talk game” with her. They don’t want her to suspect that she may be getting backdoored by Erica. She tells them that she doesn’t know yet what she’s doing about the vote since Erica probably isn’t using the veto, and they should touch base with each other every day to see where all their heads are. 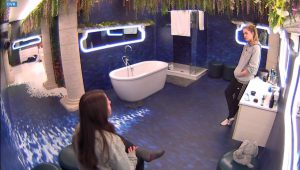 After her veto win, Erica is being bombarded by houseguests wanting to talk to her. Ryan, Ali, Liv, Johnny, Merron and Will are all shown knocking on Erica’s door. She says that the HOH room should just have a revolving door. Maddy tells Erica that she should use the POV on her and take out a big target. Hamza tells her the same thing. Merron wants her to use the veto on him because he doesn’t feel safe on the block next to Maddy. (Merron learned on live feeds that Veronica was campaigning against him for Maddy to stay. He’s pissed. Veronica even told him not to use the veto on himself if he won it.)

For the POV ceremony, Erica wants to set herself up for this week and the weeks ahead. She’s not sure if using the veto is best for her game or for others’ games. (She said on feeds on Saturday and Sunday that she couldn’t wait to use the veto and put Veronica on the block, especially when Kaela told her that Veronica said that Erica didn’t have the guts to use the POV.) She told Maddy and Merron that she wouldn’t know for sure what she is doing until the ceremony because she didn’t want her plan to get out. 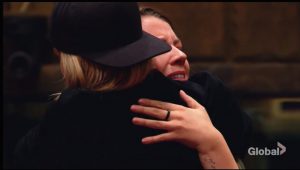 Erica surprises Maddy by using the veto on her. Maddy is happily surprised, and Erica gives her a big hug, telling her that she fought hard in the veto comp and that she thinks that their game talk has improved during this week. She replaces Maddy with Veronica. She tells Veronica that her game over the last week has been very shady. She says, “You think you’re running this house, and I’m here to remind you that you don’t.” EPIC! All the houseguest gasp afterwards. Check out Ali and Liv’s reactions: 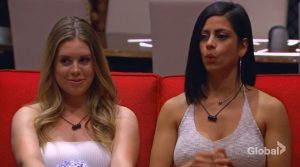 Veronica says in DR that Erica just started a war. Oh, PLUR, you won’t be around to fight it. You’ll be watching from home. Thank you, Erica for putting this psycho on the block. Bye, bitch.