Please accept my heartfelt apology for missing blogging recaps of last week’s shows. I have a neurological condition that caused me to fall twice. I’m banged up, bruised and sore but, on the mend, and ready to recap for you again. Thanks to those of you that reached out to check on me, for your patience and reading my blogs. 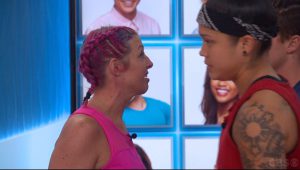 After the drama caused by Brett’s speech calling out Rockstar, she is PISSED. Winston exited, and everyone is focused on Rockstar getting in Brett’s face rather than watching Winston’s picture go gray. She explodes on him for calling her out on TV on her daughter’s birthday (which is the next day). He tells her to just own it. She’s so livid, she loses her words, and Brett seems vindicated in that moment. Meanwhile, Tyler is asked by Kaitlyn to swear on his father’s grave that he didn’t flip. This infuriates Tyler, and he tells her he would never do that, which she thinks means he didn’t flip, but he clarifies that she can’t ask him to swear on his father again. 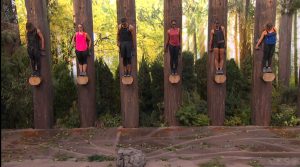 For the conclusion of the Out on a Limb HOH competition, houseguests start to fall left and right. Rockstar is out first and cries to Scottie that she tried so hard. Fessy is out next, followed by Brett, Bayleigh, JC and Rachel. Next, Haleigh falls, leaving only Kaycee, Kaitlyn, Sam and Tyler. Once Kaitlyn falls, Kaycee falls immediately after her. Sam is screaming at Tyler to jump down. He tries to negotiate for his safety, so people don’t know they’re working together. Sam responds with, “Are you fucking kidding me?” She continues begging him to jump, and he does, making Sam this week’s HOH. She wants control over who has the chance to automatically re-enter the game since the expiration date for her Bonus Life Power App was last week. Is this the rumored battle back with the first 4 evictees? 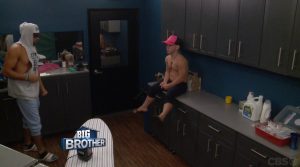 JC and Tyler planned to pin their votes on Kaitlyn before the vote, and Brett’s speech gave them cover. Fessy, Rockstar, Haleigh and Kaitlyn distrust each other after it appears that their own ranks are flipping votes each week. Fessy is super pissed and talks to JC, who blames the votes on Kaitlyn or Haleigh. He’s slamming cabinets and is ready to go off on Kaitlyn and Haleigh. JC explains that that’s not smart gameplay, and he can’t go off on anyone. JC is simultaneously infuriating Fessy and calming him down. Nice gameplay, but he’s still the #MinionFucker. 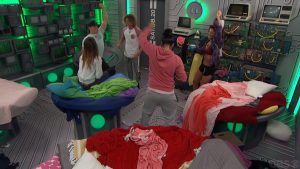 Fessy is in the bathroom with other houseguests when Kaitlyn asks to talk to him privately. He reluctantly joins her and tells her that he trusts nobody. She tells him that he’s freaking her out by not looking in her eyes or wanting to talk to her. She tells him that she is being lied to about the votes, too. Meanwhile Level 6 celebrates that their night couldn’t have gone better between Sam’s win, Brett’s speech and the distrust sown on the other side of the house. They do a celebratory dance. 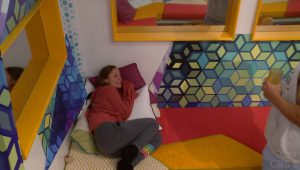 Fessie and Kaitlyn’s conversation results in ANOTHER emotional breakdown from Kaitlyn. She can’t believe he thinks she flipped. However, she flipped in week 1, backdoored Swaggy week 2 and it seems like she could’ve planned to flip with Brett. Their conversation is interrupted by “Who wants to see my HOH room?” from Sam. At first, Miss Melodramatic refuses to go, but finally relents and heads to the room reveal. 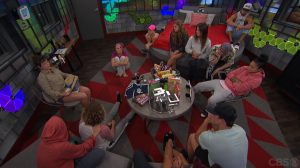 Sam takes a very different approach to being HOH. She tells the houseguests that she knows who she’s nominating, so there won’t be one-on-one’s, that this room is hers this week and no one is allowed in it without her. Haleigh has an immediate sinking feeling because she hasn’t connected with Sam at all and hoped to connect with her during their one-on-one. Rockstar is still going off in the DR about Brett lying about her and now, she can’t talk to the HOH before nominations. 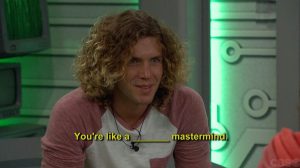 Kaitlyn comes up with the possibility of Sam using her power to cancel 2 of their votes against Brett and switching them to Winston. She shares her theory with Tyler, who is in awe of her ‘intuition.’ He tells her that she is a fucking mastermind. He then gives the camera the thumbs up behind her back as she tells everyone that “It’s so what happened.” BB gives her a buzzer. Twice. LOL. 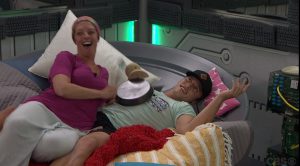 Rockstar continues to fume into the night about Brett. JC eggs her on to go pots and pans on Brett just as houseguests are trying to go to sleep. She grabs a pan and metal spoon. She says that she is celebrating that her best friend, secret showmance with a micro-penis and baby daddy Brett is still in the house. She aggressively jumps in his lap and continues beating her pan loudly. Brett says while she is annoying him, she’s also disturbing houseguests, making herself a target. 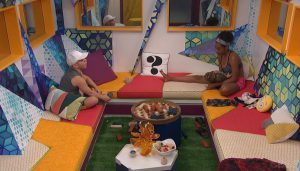 JC is asking about Scottie’s height, when Bayleigh jumps in and asks him about dwarfism using the term ‘midget.’ He says he doesn’t have dwarfism; he’s just short man. He tries to explain to her that ‘midget’ is the equivalent of calling a gay man ‘fag’ or a black person the N word only JC says the actual word. She tells him not to do it again. They have a heated discussion about using the words that offend each other. She says it’s never okay to say the N word, while he explains that ‘midget’ is a slur. Both explain why those words triggered them because of what it was like growing up. JC says that he was just trying to put into context what ‘midget’ means to shorter community and apologizes for being crude. 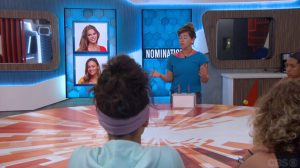 Time for the nominations: Sam nominates Haleigh and Kaitlyn, and then she lights the house on fire with her speech. Sam says that they take the most and contribute the least. She thinks they treat the young men disrespectfully by hanging all over them, constantly asking for massages and to play with their hair. She says that is the opposite of female empowerment, and they should have more respect for themselves. BOOM goes the dynamite. Fessie didn’t like Sam’s speech. Brett is thrilled that the house is in chaos and he hopes that Rockstar will be backdoored. Both nominees are crying in the DR, mainly from embarrassment that their families will see that. Duh—they’ve already seen it; Kaitlyn’s boyfriend broke up with her over it. She just doesn’t know it yet.