Julie says that everyone is plotting their way to the end of the game. 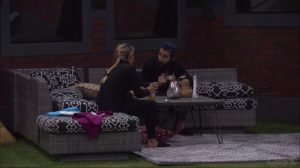 First, we see Paul meet with Matt and Raven, and they say that they want to take a shot at Jason and Alex. While Paul thinks that Jason should be first to go, he has his AMF alliance with Alex, so he calls her outside to talk with him. He explains to her that with fewer people in the house, it’s going to get harder for them to meet privately. He talks to her about end game scenarios. She wants the order of evictions to be Mark, Matt, Kevin, Raven and finally Christmas with her ideal final 4 being her, Paul, Jason and Josh. So, Paul realizes that Matt and Raven are aiming at Jason and Alex, and Jason and Alex are aiming at Matt and Raven, which is exactly what Paul was hoping to hear. 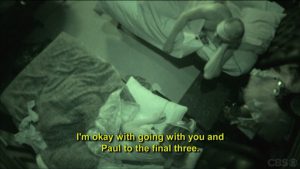 Alex and Jason are talking in bed. They don’t think that Paul will screw them over and that they are the 3 that are most deserving to win the game. Meanwhile, Paul goes to Christmas to let her know that both couples are planning on taking shots at each other. Josh, Christmas and Paul are far down in the pecking order. He says that they just need to get through the next 2 weeks and he’ll steamroll them to the end. 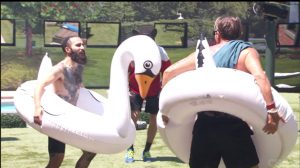 Jason has the Instagram glasses from winning the POV. He encourages Paul and Kevin to fight with the inflatable geese pool toys. Kevin is the one to strike first at Paul. He says that growing up, if you threw the first punch, you win 75% of the fights, so he got Paul that time. 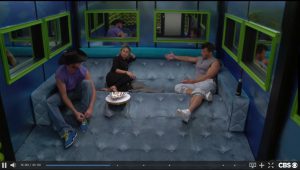 Mark talks to Jason about if there is chance to get him and Alex to keep him. He speaks with Alex and Jason, and Alex tells him straight up that keeping him isn’t good for her game. He goes to Kevin and while Kevin admits that Matt and Raven drive him nuts, he says that he has to defer to Alex and Jason. Then he goes to Paul and asks him if he would vote with Jason, Alex and Kevin to keep him. In DR, Paul says that they are planning to take out Matt next week, but maybe they should consider taking Matt out this week. Important to note: Matt and Raven drive the houseguests nuts. They are constantly play fighting and are loud. Raven is always telling white lies and complaining about being terminally ill. The houseguests doubt a lot of the things that she says, notice that her accent is often put on for the cameras and are fed up with Matt and Raven for doing nothing in the game. 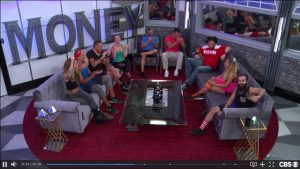 Julie joins the houseguests to have a Q & A.

They are shown footage of themselves slipping and sliding and mainly falling on the Home Zing Home veto comp. Jason is shown running in place not quite able to get up the hill, and Alex jokes that Christmas is still in last place. They all laugh; it’s the first time any of them have seen themselves on BB, minus Paul, of course. 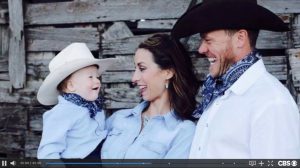 We are then taken to Iowa to meet Jason’s wife, Holly and his adorable son, Gatlyn. Gatlyn says he misses his Daddy. We watch Holly, Gatlyn and grandparents watch as Jason reads his HOH letter learning that he’s going to be a father. Holly gets teary eyed (hormones) and says it was worth the wait. Jason’s mom says that they were beginning to wonder if Jason was ever going to win HOH and learn that Holly is pregnant. Holly says that Jason was under the radar, but now he’s winning competitions. Holly likes Alex as Jason’s BB wife because she keeps him on his toes. Holly thinks that Jason is going to have a new focus after learning they are having a baby.

Time for the eviction: 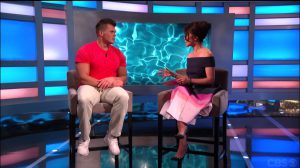 Mark is evicted. Julie says that he admitted to being a flip flopper and she asks if he was loyal to anyone in the game. He doesn’t give a straight answer, except to say that he wanted things to work out with Cody and Jess, but that Cody really messed his game up. Julie asks about Elena, and Mark says he’s curious to see what people think they were. He admits that he came into the house looking for a showmance and a power alliance. Julie asks about his relationship with Josh. Mark says that Josh is a great guy, but he turned on him after he threw a drink in his face. Um, Mark, you threw fucking vinegar (pickle juice) and hot sauce in his eyes, dumbass. (Okay, I had to throw in 1 more dumbass.) You act like it was water. How the fuck did you expect him to react? Mark gets nice goodbye messages from everyone and Josh calls him out for flip flopping, but finishes off by saying to look on the bright side, he gets to spend time with Elena in jury with some funny eh, eh sound effects at the end. 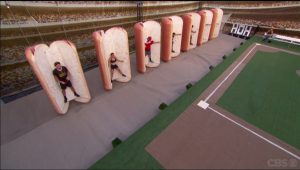 For the HOH competition, Everyone’s a Wiener, we are taken to the BB baseball stadium, where all the houseguests are inside of hot dog buns. It essentially a wall comp, but they can’t see each other. The goal is to stay in the buns as long as possible. Julie says that the grounds crew has work to do and all the houseguests are squirted with water. What are hot dogs without condiments? The houseguests are hit with mustard and ketchup. The rest of the competition played out on live feeds.

By the time the live feeds came on, Kevin was already down. He throws every competition. Matt fell as the hot dog bun was lifted and tilted. That left Raven, Paul, Jason and Alex. Raven and Paul fell at almost the same time. Alex and Jason were the only 2 left, and they were negotiating as to who would be HOH. Matt exploded at them because everyone was freezing and wet. He said I had 2 votes against me tonight. Alex gave the HOH to Jason. It was short for an endurance comp.

Check back here after the Veto comp and meeting for spoilers.