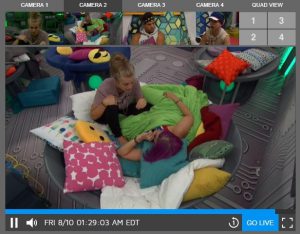 After the feeds came back after Haleigh won HOH, she, Fess, Rockstar and Scottie were very excited, and Haleigh starts holding one-on-ones in the have not room. They quickly decided to put up Angela and Kaycee with a Tyler backdoor, but JC and Sam’s names were also tossed around. 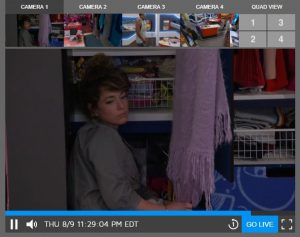 Then, Sam goes off the deep end, literally crying and yelling in increments for about 8 hours straight, repeatedly saying that she hates being there, wants to go home, people are making fun of her and she told Haleigh she can put her on the block. It was concerning to watch on feeds—she kept asking which motherfuckers were making fun of her and made threats of violence against houseguests, stating she wanted to rip their limbs off and hit them over the head with them. She was crying inside of her closet and has continued to go nuts on and off over the weekend, making many houseguests uncomfortable, but Rockstar takes the opportunity to “scoop” her up offering her comfort.

Everyone tells Haleigh how nuts Sam is going, and she gets a dose of it first hand with Sam crying during her one-on-one, saying she hates it there, wants to go home…same stuff she’s saying to everyone else. Then, she comes back and tells her that she won’t put Haleigh up next week if she’s not nominated this week. Scottie even tells her that he’d put up JC and Sam if this were his HOH. Sam then tells Rockstar that she wants Angela and Tyler to go the fuck home. Of course, Rockstar brings this info to Haleigh who goes back to her original plan.

Tyler later talks to Sam and tells her that he has been distancing himself because he can’t stand to see her crying. Plus, he explains that he felt isolated after Bayleigh yelled at him the way she did and put a target on his back. Tyler has told Sam about his power to build trust with her, and he tells her that he may have to use it this week to keep himself safe after the veto. 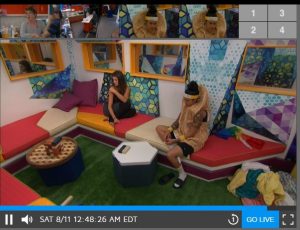 Last minute, before noms, Scottie tells Haleigh that he thinks that Sam is playing the entire house, and he almost convinces her, Fessy and Rockstar that JC is going back and forth between the sides, giving multiple examples of how JC has fed Fessy misinformation. Before Haleigh can change her mind, BB calls her for nominations. She goes with her original plan and nominates Angela and Kaycee. 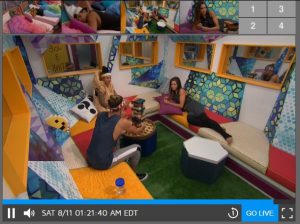 For the Hacker competition, houseguests were shown some extreme closeups of various items in the house and had to determine which room the item was in. Kaycee won the hacker comp. She decided to remove herself from the block, put up Rockstar, picks Tyler play veto and she’ll eliminate a vote from probably Fessy. 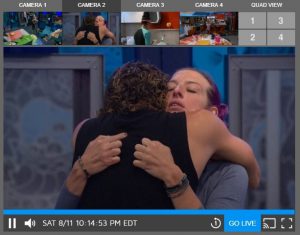 The veto was OTEV, and the players were Haleigh, Angela, Rockstar, Kaycee, Tyler and Fessy. I’m not sure 100% the order of elimination for rounds 1-3, but Angela, Kaycee and Fessy went out first. In round 3, Rockstar told Tyler he had the wrong answer, so he slid back down the slide, got the correct answer and made it back to offer the correct answer before Haleigh, leaving Rockstar and Tyler in the final round. Rockstar makes it back to OTEV first, but has the wrong answer, so Tyler wins the POV.

Rockstar tells Tyler not to fuck her, but Tyler is using the Veto on Angela. Level 6 has changed positioning tactics with Brett now playing the other side and Tyler being the shield. Brett has worked his way in well, and Tyler is pretending that he is a free agent. 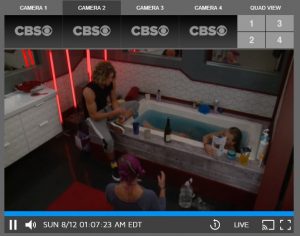 After the veto, Haleigh drinks pretty much a full bottle of wine and decides she wants to talk to Tyler while she’s taking a bath. She and Rockstar pitch him hardcore on saving Rockstar, promising that the whole house will be behind him, with protection promised from Rockstar and Haleigh, and they promise that Scottie and Fessy also won’t nominate him. Rockstar leaves and Haleigh continues to pitch Tyler, spilling all kinds of secrets from her side of the house in her buzzed state. Dumbass believes that her pitch worked, but Tyler tells Level 6 everything.

So, Level 6 theoretically has the numbers to save Kaycee, who will be the replacement nominee as the other side of the house suspects her as being the hacker. Tyler doesn’t have to use his app, good for a total of 8 evictions, which carries him through the first week of September. It’s going to get trickier to figure out when to use it as the weeks progress. 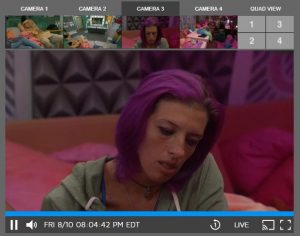 Expect Rockstar to go to jury this week, and if necessary, I’ll update you with any post-veto ceremony drama. While Rockstar and Haleigh recognize that Tyler will probably use the veto on Angela since she used it on him last week, they are hoping their pitch worked and they can backdoor him next week.