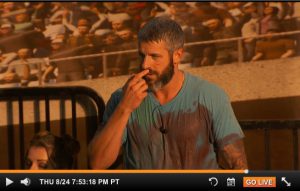 Jason won the Everyone’s a Wiener HOH competition. Alex threw it to him, although he swears he won it square and fair. He’s being a bit douche-y about it. Once Alex and Jason were the last 2 up, Matt exploded on them for making everyone stand outside freezing and miserable, saying that he had 2 votes against him tonight during the eviction. Everyone is blaming Kevin and, for some odd reason, Raven. WTF? Why would she vote against her man? Everyone is on board with Matt and Raven going up and Kevin being a backup target. Except Jason. He’s driving everyone else nuts. Matt and Raven went up under the guise that Kevin was being backdoored. 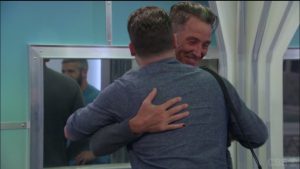 Ever since Jason won HOH, Kevin has been super paranoid and stuck to Jason like glue. The only reason he must be paranoid is if he is planning on taking out Jason or Alex. He is constantly checking in with everyone, saying “we’re still good?” It’s driving everyone nuts, and people have put together context clues to come to the conclusions that Kevin knows Derrick. The greeting that Derrick gave Kevin, calling him “Kev” as if they’re friends and the way he sort-of pulled a fan boy when Derrick came in has Alex, Paul, Christmas and Josh doubting him. They think his stories are bullshit and that he is either a private investigator or cop. Hence, he knows Derrick. He has given various excuses for knowing Derrick, i.e. meeting him at the market and meeting him at a BB casting call. The problem with Kevin, as much as I enjoy him, is that his lies are catching up to him fast.

Paul, Christmas and Alex are starting to push Jason to put up Kevin as a replacement nominee, and Jason promised Matt and Raven that he will take one of them down if he wins veto. Strangely, Friday night the veto players were drawn. This confused the houseguests making them think they might be playing the black box competition. The veto players are Jason, Matt, Raven, Paul, Kevin and Josh. Players stayed up late thinking that BB would wake them up in the middle of the night for the veto, and it never happened. 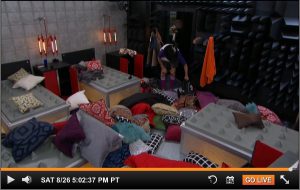 Saturday was the veto competition, which was Hide and Go Veto. Since this is played individually, the feeds were down for about 5 hours. When the feeds came back, Jason had won the POV, and as per usual, the house was trashed. Jason ran his mouth (also as per usual) and blabbed the plan to use the veto on Raven and put Kevin on the block. Kevin acted like a freaking paranoid idiot the rest of the night. Alex and Jason got into a fight because Kevin made Jason promise not to put him on the block. 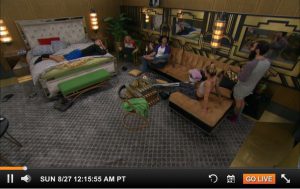 Meanwhile, Christmas, Alex, Jason, Josh and Paul are all pushing him to put Kevin up. They are giving him all the reasons why: $25K, the hinky votes, trying to sow discontent among their core group, having it out for Josh and Alex, knowing Derrick and the way he has talked badly about Alex, Paul, Josh and Christmas behind their backs. Jason would rather someone else put Kevin on the block. Alex points out to him that he is going to be losing 2 jury votes in Matt and Raven for telling them that he will take one of them down, whereas he would only lose one vote with Kevin. 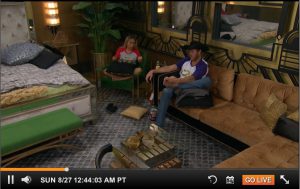 Jason is being stubborn, although he does see for himself the way that Kevin is overselling not putting him on the block. Alex and Jason have an argument over him not keeping his word to pull one of Matt or Raven off of the block. The Kevin and Matt/Raven bashing continued well into the night. Dumbass Matt made a flippant comment to Christmas that if Jason decided not to use the veto that they could just vote him out so he can go drink in the jury house. BTW, this season has seen the least amount of alcohol that I can ever remember, and, with fewer houseguests, BB PLEASE GIVE THEM BOOZE to make #TeamFunFeeds. 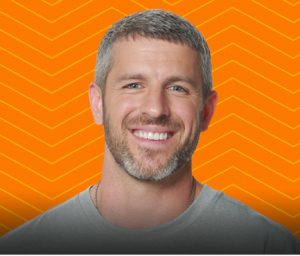 As of the publishing of this spoiler, Matt is slated to be evicted on Thursday. However, it is quite possible that could change if Jason grows a pair and puts Kevin on the block. Yes, Kevin fans will be devastated should that happen because he is funny as fuck and Matt and Raven are annoying as hell. However, end game BB is very much about jury management, and Jason isn’t keeping his word to 2 jury votes by not putting Kevin on the block, whether he goes home or not.