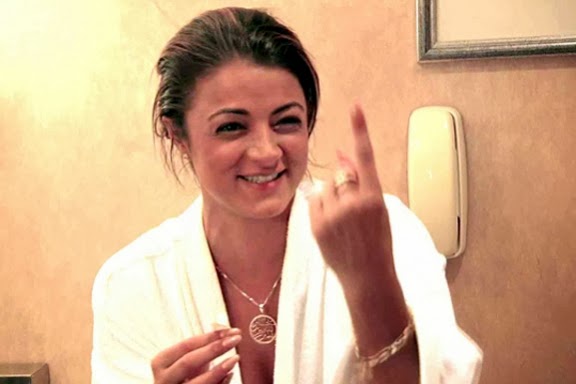 The epic vacation to the homeland continued this week on Bravo’s Shahs of Sunset. As MJ, GG, Mike, and Reza joined Asa in Turkey for her family reunion. This weeks episode is a continuation of last weeks episode (so if you missed it, check out our recap!)  The Shahs group was traveling on a yacht to Princess Island, while on the way there, MJ and Mike decide to make peace to one another. After countless arguing between the two Mike comes to the realization that MJ is “his sister” and they make their amends.  After arriving at the island the group decides to grab a bite to eat at a local Turkish restaurant. The women there are wearing authentic Muslim attire and Reza is freaked out a bit by this. In fact he lets it be known that it freaks him out. This gets him into a bit of an argument with Asa who believes that it is disrespectful to think that way of their culture.
On their quest to get as close as possible to their homeland as they can, Asa and her mother are joined by Reza for a small plane ride to a town on the Iran border. Since they are here, Asa wants to be able to say that she was as close to her home as possible. While on their way there Asa’s mother becomes so nervous to see the border that she got “butterflies”. They are worried about being seen by the border patrol because of the fact that they are war refugees. If they are noticed by the border patrol they could be arrested. We are able to see all of the patrol in their towers with their artillery. This moment really upsets Asa, because of the fact that she can’t enter into Iran. This is also a very emotional part of the trip for Asa’s mother. Because while they are on the border looking into Iran she just wants to go and visit her mothers and fathers grave. But she can’t. Her father had passed away after they left Iran and Asa’s mother was never able to say goodbye to him.
Later on in the episode the group is gathered around with Asa’s family. All of her aunts, uncles, cousins, etc. and they are having a get together. While the group is hanging out with the family, MJ comes to the realization that she wants children in her life. This upsets her. MJ runs off crying into the bathroom and Asa comes to see what is wrong. MJ is scared that she is too old to have children and that its too late for her.
To end the episode the group has dinner with Asa’s family and Reza reveals that this trip has changed him as a person for the better.

What did you guys think of the episode? Was it an emotional one for you? Let me know below in the comments!